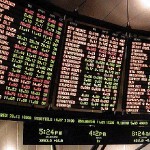 Who was held accountable for almost destroying capitalism? Who is blocking reform now? The answers are not widely known to Americans. This will change.

The more we learn about the shell games practiced by our own C.E.O.’s during the pre-crash bubble, the more we share Larsson’s outrage that none of them are doing time. For instance, we now know, as we didn’t in September 2008, that Lehman’s collapse wasn’t exactly an unexpected, unpredictable calamity to those in its executive suites. The 2,200-page bank examiner’s autopsy released 10 days ago concluded that Lehman, in league with its auditor Ernst & Young, used ‘materially misleading’ accounting gimmicks to mask its losses, duping investors and the ever-credulous Securities and Exchange Commission alike.

Far from being held liable for the chicanery and recklessness that would destroy their company and threaten their country’s economy, these executives benefited big time. In a study late last year, three Harvard Law School researchers examined public documents to assess whether one ‘standard narrative’ of the crash was true — that ‘the meltdown of Bear Stearns and Lehman Brothers largely wiped out the wealth of their top executives.’ It turned out to be a fairy tale. ‘In contrast to what has been thus far largely assumed, the executives were richly rewarded for, not financially devastated by, their leadership of their banks during this decade,’ the Harvard Law team wrote. The top five executives at both Lehman and Bear collectively took home $2.4 billion in bonuses and equity sales — that’s nearly a quarter-billion dollars each — between 2000 and their 2008 demise.

Anyone in Washington who thinks these kinds of revelations will stop and that America will just turn the page as the Dow rebounds is spending too much time with Goldman Sachs lobbyists. Just take another look at the best-seller list. The fastest-selling nonfiction book in America right now — an instant No. 1 on Amazon — is ‘The Big Short,’ by the journalist Michael Lewis. An even better storyteller than Larsson, Lewis chronicles a few lonely financial renegades who saw through Wall Street’s real- estate securitization Ponzi scheme. Some are as brainy and idiosyncratic as Larsson’s fictional geek heroine. Lewis’s heavies are nothing if not American iterations of the villains of ‘Dragon Tattoo.’

‘The problem wasn’t that Lehman Brothers had been allowed to fail,’ Lewis writes as he surveys the post-September 2008 wreckage near the end of his book. ‘The problem was that Lehman Brothers had been allowed to succeed.’ Without reform of the financial system, that problem remains unsolved. Wall Street will keep incentivizing reckless risk. Too-big-to-fail banks will keep getting bigger. The system will crash again sooner rather than later, once more taking Americans’ savings, jobs and tax dollars with it.

Anger over the last crash and the bailout of its high rollers spans the political spectrum, from neo-New Dealers on the left to Tea Party protesters on the right. As the battle over financial regulatory reform began in earnest with Chris Dodd’s introduction of a Senate bill last week, Lewis told an interviewer, ‘There is a war that is about to happen over not just who regulates Wall Street but what the rules are.’

The question for the politicians at the center of this battleground is simple enough: Which side of the war are they on? The Republican leadership revealed its hand unequivocally last week. Addressing the American Bankers Association, the party’s House leader, John Boehner, promised to delay and fight any finance-reform bill. ‘Don’t let those little punk staffers take advantage of you, and stand up for yourselves,’ Boehner instructed the poor, defenseless bankers. In late January he metthe chief executive of JPMorgan Chase, Jamie Dimon, to make a pitch for donations. That may have been unnecessary. Chase and its employees, an A.T.M. for the Democrats in 2008, gave 73 percent of their contributions to the G.O.P. in the fourth quarter of 2009.

Republicans in the Senate will be no different. Mitch McConnell’s strategy of unmitigated obstructionismremains gospel there. Just as Charles Grassley and Olympia Snowe played the Democrats with months of fruitless negotiations on health care reform, so Richard Shelby and Bob Corker have been stalling a financial reform bill with similarly arid feints at ‘bipartisanship.’ Corker insisted that any bill exclude regulation of extortionate ‘payday lenders,’ who just happen to be among his biggest campaign contributors.

Unlike the Republicans, President Obama sends mixed messages on these issues. He says a stand-alone consumer protection agency is a priority. A key appointee, Gary Gensler, the chairman of the Commodity Futures Trading Commission, says he is determinedto fight for serious regulation of derivatives. But the Treasury secretary, Timothy Geithner, still seems more inclined to preserve, not overhaul, the system that failed during his tenure as chairman of the New York Fed.

Geithner’s major calling lately has been a public-relations tour, with full-dress profiles in The New Yorker, The Atlantic and even Vogue, which filled us in on his humble ‘off-the-rack’ Brooks Brothers suits. Last week he also contributed a video testimonial to the on-air fifth anniversary celebration of Jim Cramer’s ‘Mad Money.’Like the heedless casino culture it exemplified, that CNBC program has long been back to speculative business-as-usual, pumping stocks as if the crash were just a small, inconvenient bump on the road to larger profits and bonuses. The particular ‘Mad Money’ episode to which the Treasury secretary lent his imprimatur included such choice Cramer bits as a reference to Nancy Pelosi as ‘Politburo president’ and a prediction that the passage of ‘Obamacare’ could cause the stock market to tank.

Let the G.O.P. be the party of ‘Mad Money.’ Once the protracted health care soap opera at last becomes history, the pivot to financial reform could be a great opportunity for the president, a decisive bid for his party to repossess that anti-establishment truck from Scott Brown. The Republicans will once again squeal that it’s political suicide for Obama to try to ‘ram through’ a bill, and once again decry his ‘socialism.’ But while the voters were often genuinely divided about health care, they are not about Wall Street reform: polls have consistently shown for a year that a 60 percent majority favors it.

What these voters crave are leaders unambiguously on the side of true fairness and accountability, not apologists for those traitors, as Stieg Larsson aptly called them, whose shell games broke the economy and stuck us with the bill. The fired-up president who energized the health care endgame by taking on insurance companies doesn’t have a year to find his voice for the war ahead. Not only is the 2010 election season fast approaching, but it will coincide with angry commemorations of the second anniversary of the fall of Lehman Brothers. Politicians who are still seen as soft on the culprits could yet fall too.