KABUL, Afghanistan — The effort to win over Afghans on former Taliban turf in Marja has put American and NATO commanders in the unusual position of arguing against opium 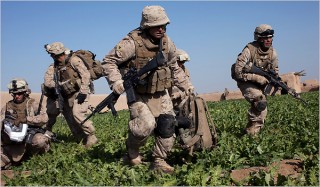 eradication, pitting them against some Afghan officials who are pushing to destroy the harvest.

Marines landed in an Afghan opium field last month on the outskirts of Marja, where opium is the main crop of the area’s farmers.

From Gen. Stanley A. McChrystal on down, the military’s position is clear: “U.S. forces no longer eradicate,” as one NATO official put it. Opium is the main livelihood of 60 to 70 percent of the farmers in Marja, which was seized from Taliban rebels in a major offensive last month. American Marines occupying the area are under orders to leave the farmers’ fields alone.

“Marja is a special case right now,” said Cmdr. Jeffrey Eggers, a member of the general’s Strategic Advisory Group, his top advisory body. “We don’t trample the livelihood of those we’re trying to win over.”

United Nations drug officials agree with the Americans, though they acknowledge the conundrum. Pictures of NATO and other allied soldiers “walking next to the opium fields won’t go well with domestic audiences, but the approach of postponing eradicating in this particular case is a sensible one,” said Jean-Luc Lemahieu, who is in charge of the United Nations Office on Drugs and Crime here.

Afghan officials, however, are divided. Though some support the American position, others, citing a constitutional ban on opium cultivation, want to plow the fields under before the harvest, which has already begun in parts of Helmand Province.

“How can we allow the world to see lawful forces in charge of Marja next to fields full of opium, which one way or another will be harvested and turned into a poison that kills people all over the world?” said Zulmai Afzali, the spokesman for the Afghan Ministry of Counternarcotics.

“The Taliban are the ones who profit from opium, so you are letting your enemy get financed by this so he can turn around and kill you back,” he added, referring to how the Taliban squeeze farmers for money to run their operations.