Watching the health care debate, it is clear that, while the the Republican Party has legitimate positions, their argument got lost in the lack of civility strategy they employ to influence.

Calling people Niggers, Communists, Socialists, Homos, Faggots, and Baby Killers is simplly not a shrewd or smart strategy as evidenced by the results and negative reactions to it in the land of independents and moderates, and frankly, all people on all sides of the issues.

By not denouncing this strategy across the board and removing those who, some say, roguely employ it, the leadership of GOP has clearly endorsed its’ use thinking that it would work. It has not. In fact, its’ a major massive turn-off. 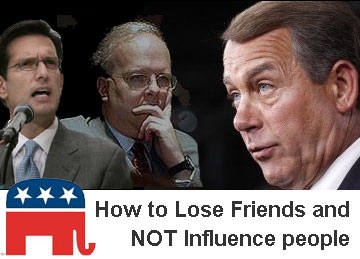 What is sad is that their message gets lost in the mire of this strategy and we, the moderate middle, cannot hear what they are saying anymore. I mean, the GOP probably has good ideas but everytime one of their assigns comes on TV, I stop listening and that’s not good.

Look, I have a gay family member, an african american friend, and yes, I know a german guy who dad’s father was in Hitler’s army (he 100% rejects Nazi-ism) so I take massive offense to the GOP’s lack of civility and vicious name calling. It offends the people I care about and it offends me. I have shut down on them and that makes me sad, angry, and upset because I used to like the Republican ideas and now I cannot hear them anymore.

WHAT THE GOP SHOULD DO;  A FORMULA FOR SUCCESS

The Republicans have a storied history and they are needed to keep a balance in the U.S. political system. When they embrace a new civility, they will become an influential important party once again. With a paradigm shift, they have a great shot at a return to greatness. Without it, they are doomed.