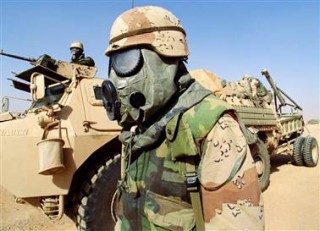 Reading this piece on Gulf War Illnesses, there is reason to hope.

VCS Advocacy in the News: VA May Designate 9 Infectious Diseases as Related to Gulf War

April 5, 2010 (Army Times) – In a boost for veterans of the 1991 Persian Gulf War and those who have served in recent years in Iraq and Afghanistan, the Veterans Affairs Department has proposed changes to its list of illnesses that are presumed connected to service to include nine infectious diseases.

The expanded list also would include anything that can’t be diagnosed — such as symptoms that could be related to exposure to smoke from open-air burn pits and the unexplained maladies broadly referred to as Gulf War illness.

“We recognize the frustrations” that many Iraq and Afghanistan veterans and their families experi ence “on a daily basis as they look for answers to health questions and seek benefits,” VA Secretary Eric Shinseki said in a statement announcing the publication of VA’s proposal in the Federal Register.

Veterans advocacy groups said the changes — as well as the inclusion of Afghanistan veterans in this latest proposal — appear to be the latest phase of Shinseki’s promised efforts to cut through some of VA’s red tape and to give veterans the care they need.

“The proposed new VA rules may finally, after nearly two decades, open the door to a lifetime of free VA medical care for tens of thousands or more sick Gulf War veterans,” Sullivan said. “VCS is very pleased that VA followed the law, science and logic by extending health care and benefits to our Iraq and Afghanistan war veterans.” He recommended that veterans immediately get in touch with a veterans service officer and file a claim if they have illnesses or injuries they believe are connected to their service in Southwest Asia or Afghanistan.

A training letter that went out to VA medical personnel and claims adjudicators in February asks that examiners document possible exposures and whether symptoms might be related to those exposures.

“The environmental hazards may have included exposure to smoke and particles from oil well fires; pesticides and insecticides; indigenous infectious diseases; solvent and fuel fumes; ingestion of pyridostigmine bromide tablets as a nerve-gas antidote; the combined effect of multiple vaccines administered upon deployment; and inhalation of ultra-fine-grain sand particles,” stated the letter from Bradley Mayes of the Veterans Benefits Administrations’ Compensation and Pension Service.

“In addition, there may have been exposure to smoke and particles from military installation burn-pit fires that incinerated a wide range of toxic-waste materials,” he wrote.

Military Times brought attention to the burn-pit issue with an investigative report published in October 2008 and in a series of subsequent articles. Over that time, Disabled American Veterans has created a database documenting the illnesses of hundreds of service members and veterans who believe they became sick after exposure to the burn pits in Iraq and Afghanistan, and lawmakers have begun to ask Pentagon officials about the issue.

DAV also welcomed the presumption of service connection for ill veterans of the Gulf War.

“The Gulf War Advisory Committee had made these recommendations to accept the evidence that is so apparent to many people — that VA take action as opposed to what we’ve seen in the past,” said Dave Autry, DAV’s national director of communications. “We take this as a good sign that the administration is doing what they said they would do. They are moving in the right direction.” He noted, however, that the addition of the burn-pit cases will further increase VA’s already considerable claims workload.

The training letter from Mayes specifically details how to document respiratory ailments, which have been a problem for recent veterans because doctors could not come up with a diagnosis for at least 50 soldiers who complained of shortness of breath until the doctors conducted a biopsy — a procedure not common for lung ailments.

Before now, veterans could not receive benefits for those undefined diagnoses.

“Although most studies have focused on the initial Gulf War, information is accumulating that indicates environmental hazards may also be widespread in the current theater of [Persian Gulf] operations and may contribute to the disability patterns typically associated with Southwest Asia service,” Mayes wrote.

Documenting today’s ailments could provide clues to why one in four veterans of the Gulf War is now ill.

The public has until May 17 to submit comments on VA’s proposed rules.