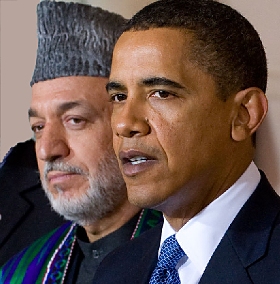 “All a man can betray is his conscience,” says Joseph Conrad, and there is no doubt the betrayal of trust carries a heavy taboo when the Afghan President Hamid Karzai on Thursday blamed foreigners, including UN and EU officials, for “very widespread” fraud during presidential and provincial elections last year.

“The truth is this brothers … There was fraud in presidential and provincial council elections, no doubt that there a very widespread fraud, very widespread,” Karzai told a meeting with Afghan electoral workers in Kabul. “But Afghans did not do this fraud. The foreigners did this fraud,” he said.

He singled out former UN deputy head of mission, Peter Galbraith, who was sacked after a row with his boss on how to handle vote irregularities, and the head of the EU election observation mission to Afghanistan, Philippe Morillon.

With this move by Mr. Karzai the Obama administration is going to have a management crisis in Afghanistan where over 100 thousand US troops to be stationed soon.

A head of a company has a major corporate initiative which requires considerable resources and attention. His reputation as a leader is at stake. The credibility of his company is on the line. But the head of the responsible division won’t follow orders. He [division head] relies primarily on associates rather than the best people in his group to drive this main concern. Even in worse case, there is widespread corruption in his establishment. He pays lip-service to anticorruption efforts but does virtually nothing. What should the head of the company do?

The answer for him is clear: he fires the division head. But this is exactly the problem that President Obama is facing in Afghanistan with President Hamid Karzai, and he obviously cannot fire Karzai—who, in addition to all the problems mentioned above, secured his current term as Afghan President through an election process faced with fraud.

This Karzai’s betrayal does not come at anytime worse when President Obama has committed the prestige of the United States, his personal credibility, billions of taxpayer dollars and, most importantly, the lives of American military personnel to a war which depends — as his top generals, Petraeus and McChrystal have said — on attaining a key civilian, not military, objective: creating an Afghan state with security, order, rule of law and accountable institutions that protects and serves its people. That goal depends on defeating the corruption and instability which have plagued Afghanistan for centuries. Only when this is achieved will the Afghan populace resist seduction by the Taliban, who exploit government weaknesses and who must be defeated to reduce the threat of Al Qaeda’s return to Afghanistan.

Crucial to that task is the central government itself, which, unfortunately, is not only weak, but is led by an uncooperative and increasingly antagonistic president. Recently, Karzai thumbed his nose at the United States by claiming the right to appoint all five members of the election complaint commission—that has recently been overruled by the lower house of Afghan parliament.

In early March, he warmly welcomed Iranian President Ahmadinejad to Kabul on an official visit and two weeks later traveled to Tehran where the Iranian leader, as is his custom, launched inflammatory rhetoric against the United States.

This is not surprising that the US special envoy to Afghanistan and Pakistan, Richard Holbrooke, reportedly raised the election irregularities with Karzai shortly after the poll, but only to be rebuffed at the cost of a further downturn in Karzai’s relations with the Obama Administration.

The Karzai leadership has proved to be very ineffective for a majority of the Afghan people and the international community, specially the US. Karzai will carve a better place for himself in history if he now leaves the field on his own accord, and allow a new leader and administration to take over. The change will not solve Afghanistan’s daunting problem in the short run, but it may help the processes of the country’s stabilization and reconstruction in the long run.

In final, as Mary Harris Jones quotes about betrayal, “I am not unaware that leaders betray, and sell out, and play false.”