Home Veterans Pakistan Zeroes in on Endgame in Afghanistan

Pakistan seems happy in getting a massive civilian and military aid package and the assurance from Washington that this country will be given the central role in the Afghan endgame.

Pakistan has presented two lists to the Obama Administration officials ahead of the two-day summit.  One was a 56-pages long wish list and the second was a list of heavily bearded Taliban leaders 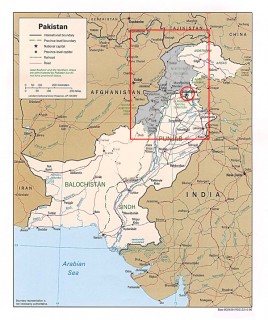 arrested recently in Pakistan.  According to the reports (msn, news) a new $7.5 billion, five year US assistance package for Pakistan’s energy, water, agriculture and education sector was pledged.  The one billion unpaid US reimbursements for fighting the Pakistani Taliban would also begin flowing.

This is indeed a great victory for Pakistan to be a central player in Afghanistan, a role it played with horrible consequences in the 1990s: the rise of the Taliban in Afghanistan, the al-Qaida terrorist network that successfully staged 9/11 and other terrorist attacks in the West and the ongoing endless war in Afghanistan, are among the problems caused by Pakistan’s three decades misadventures in Afghanistan.

Pakistan has a history of undertaking some tactical combat operations including mock operations against selective groupings within the Taliban insurgency in order to attract US policy makers to increase the cash flow.  It has now become clear that the recent arrest of Taliban leaders were also designed in order to punish those Taliban who enter into negotiation in Kabul bypassing Pakistan.  According to Financial Times (March 19), Kai Edie, ex-UN special representative to Afghanistan, accused Pakistan of sabotaging the UN clandestine discussions with senior Taliban leaders.

Pakistan never chooses to harm those Taliban who are Pakistani military strategic partners and always relies on their support.  At the very moment that Pakistani civilian leaders pledge to cut off the Taliban bases in Pakistan, the shadowy ISI agents are secretly giving assurance to the Taliban that Pakistan is supporting the Taliban in the ‘anti-American Jihad’.

One such irreconcilable group with close links to al-Qaida and ISI is Haqqani’e network which is headquartered in North Waziristan and is carrying out deadly terrorist attacks against the Western forces in Afghanistan with impunity.  This is a Pakistani no-go zone from where most suicide bombers are sent into Afghanistan.  Under increasing US pressure, it is possible that the ISI may turn against Haqqani if the upcoming US and NATO major June offensive in southern Kandahar province proves to be successful.  Given Pakistani obsession with the Taliban, this change would also be conditional and limited.

The ISI is a Pakistani complex visible and invisible intelligence conglomerates.  There is an ISI within an ISI.   That ghostly ISI remains invisible and most of its members are retired generals who deviously play the real Afghan game from behind the scene.  Their activities remain a top Pakistani secret.  When I want to update my knowledge of Pakistan’s policy vis-à-vis the Taliban, I am going to look for the latest statements by retired ISI generals instead of official statements by Pakistan’s prime minister or foreign minister.

Before the battle in Swat Valley which started in early 2009, a peace agreement between the Taliban and Pakistani military was waiting for Zardari’s approval. The Pakistani Taliban in Swat insisted that they don’t need Zardai’s signature as long as the ISI is officially endorsing the agreement.

In mid March 2010, the provincial Premier in Punjab, Shahbaz Sharif, made a plea to that Taliban at a mosque struck by a Taliban’s bomb not to attack the province for they and the province are all against Western intervention in Pakistan, “General Pervez Musharraf planned a bloodbath of innocent Muslims at the behest of others only to prolong his term in office, but we the Pakistan’s Muslim League-Nawaz opposed the former president’s policies and rejected the dictation being received from abroad.

If the Taliban are also fighting the same cause, then they should not carry out acts of terror in the province of Punjab.” (News International March 18)   On March 29, the Pakistani Foreign Minister, Mr Shah Mahmood Qureshi boasted in an interview to Newsweek that Pakistan has, “eliminated 17,000 terrorists.”  “The myth was that,” he added about Pakistan’s military success in South Waziristan, “it had never been occupied by any force and that it was impossible to do it.  We have done it.”  In Pakistani thinking Pashtun Northwest Frontier Province — formally renamed Khyber Pakhtunkhwa last week— is still a colony

Pakistan’s double game in war on terrorism, fighting those who are dangerous to its state security and those who disobey, while offering clandestine support to the most virulent Anti-Western extremists among the Afghan Taliban, is designed to trap the US into a vicious circle of a bunch of Taliban in exchange for bags of cash and weapons.  This so-called strategic dialogue has a strong sense of déjà vu about it.  Is this the last bargain? Experience shows that there would be more of the unwanted Taliban arrested in exchange for ongoing support in time to come.

Dr Ehsan Azaria is freelance journalist writing on Afghanistan for various international media.  He worked as an English language specialist in the Ministry of Education of Afghanistan last year, but resigned after six months because of government corruption.