The high cost of energy in America was paid in human lives this week, with the deaths of more than two dozen miners in a massive explosion at the Upper Big Branch coal mine in 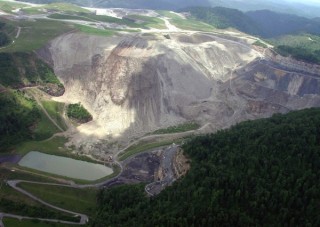 . It’s the worst mine disaster in a quarter of a century.

Upper Big Branch is owned by Massey Energy Company, which operates 47 mines in central Appalachia. According to the Los Angeles Times, it employs nearly 6,000 and in 2009 reported revenues of $2.3 billion, with a net income of $104.4 million.

At the center of this week’s catastrophe is Massey’s president and CEO Don Blankenship, a man so reviled nowadays he had to be escorted away by police when he and other company officials tried to address a group of distraught family and friends outside the Upper Big Branch mine in the early morning hours after the explosion. The crowd hurled invective – and a chair.

Blankenship hates unions (Upper Big Branch is a non-union mine), thinks global warming is a figment of our imaginations and that those who do believe in climate change are crazy; supports destructive, mountain-top-removal mining; serves on the board of the conservative, free market U.S. Chamber of Commerce and now, lucky us, shares his pearls of right-wing wisdom via Twitter.

David Roberts of the environmental magazine Grist described him as “the scariest polluter in the U.S. …The guy is evil and I don’t use that word lightly.”

Just one example of Massey Energy’s earlier history of environmental malfeasance was described in a May 2003 issue of Forbes Magazine:

“In October 2000 the floor of a 72-acre wastewater reservoir built above an abandoned mine in Kentucky collapsed, sending black sludge through the mine and out into a tributary of the Big Sandy River. The sludge killed fish and plants for 36 miles downstream. Water supplies were shut down in several towns for a month. In total, 230 million gallons spilled out, 20 times the volume of the crude oil from the Exxon Valdez. Lawns nearby were covered in as much as 7 feet of muck…