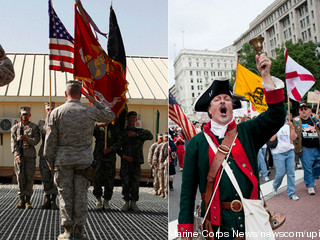 Knowing the Tea Party’s idiosyncratic views on the Armed Forces, the U.S. Constitution, God and oath to resist the liberals enslaving real Americans, the Armed Forces Tea Party Patriots view that President Obama is not a legitimate commander-in-chief is alarming.

– Armed Forces Tea Party Patriot: “My oath was to the Constitution, not to the politicians, and that oath will be kept. I won’t ‘Just follow’ orders. There is at this time a debate within the ranks of the military regarding their oath. Some mistakenly believe they must follow any order the President issues. But many others do understand that their loyalty is to the Constitution and to the people … –

The Tea Party movement has gained a foothold in the armed forces.

A new Tea Party group, Armed Forces Tea Party Patriots, has grown quickly since being launched last month by an active duty Marine Corps sergeant. The group, which vows to “stand up on the very soil we defended to preserve common sense conservatism and defend our Constitution that is threatened by a tyrannical government,” currently has over 400 members, who have signed up through its Facebook page, though many are not active duty military. And it has close ties to the broader Tea Party movement.

“People in the military need to be heard,” the group’s prime organizer, Gary Stein — a Marine Corps sergeant stationed at Camp Pendleton in southern California — told TPMmuckraker in an interview. “Our opinions do count.”

Many people in the military “feel like they can’t speak out against Obama or Congress,” said Stein. “The armed forces should have a little bit more say than we think we do,” he said.

Stein said he had served in the Marine Corps for seven years, including service in Iraq. He described himself as a “strong conservative” who had found himself disillusioned with the GOP. Stein formed the new group, he said, after finding like-minded cohorts on his base, then co-ordinating with a friend who’s active in a local southern California Tea Party chapter.

Indeed, the Tea Party Patriots appear to have sought out the Armed Forces group, perhaps to imbue the broader movement with a military seal of approval. Yesterday, Greg Holloway, who co-ordinated the Tea Party Patriots’ statement in response to the federation, posted a messageon the Armed Forces group’s Facebook page saying, “We have a tea party press release and would like to include you,” and asking for a contact person.

In promoting the Armed Forces Tea Party Patriots, Stein has raised the possibility of disobeying presidential orders. In one recent online posting, he wrote:

My oath was to the Constitution, not to the politicians, and that oath will be kept. I won’t “Just follow” orders. There is at this time a debate within the ranks of the military regarding their oath. Some mistakenly believe they must follow any order the President issues. But many others do understand that their loyalty is to the Constitution and to the people…

That declaration echoes one made by the Oath Keepers, a group of current and former military and law enforcement personnel who havevowed not to follow orders deemed to be unconstitutional— including any orders to disarm Americans. Stein agreed that the two groups are kindred spirits. “I think we’re very like-minded with the Oathkeepers,” he said. “I strongly support the Oathkeepers.”

Stein’s political activism seems to have raised some concern among his superiors. Late last month, he wrote online: “Was just told by a Marine Corps Officer to watch what I say about Obama… I think not…” And later that same day: “I was just told to keep my opinons (sic) to myself about Obama, by my Officer-in-Charge (OIC).”

Indeed, Stein may be violating military policies that restrict political statements and activities by active duty personnel. “I’ve seen military command go against people on a lot less,” Mike Lebowitz, a former JAG lawyer who’s an expert on issues of military expression, told TPMmuckraker. Lebowitz said one key question is whether the activity is judged to be “partisan.” Though the Tea Party movement has formed political parties in a few states, and has endorsed and supported candidates in some races, there’s no evidence that Stein’s group has done so.

Still, Richard Rosen, an expert on military law at Texas Tech School of Law, said Stein’s activities sound borderline. “At some point it becomes very close to crossing the line of partisanship,” he said.

And Eugene Fidell, who teaches military law at Yale Law School, told TPMmuckraker that taking a leadership role with any political group is “problematic.” But Fidell added that the military is usually loath to prosecute such acts, for fear of creating political martyrs.

This isn’t the first time that anti-Obama sentiment has surfaced within the military. Several active duty service members have challenged their orders to deploy overseas, on the grounds that President Obama was not born in the U.S. and his orders are therefore illegitimate.

For Stein, Tea Party activism is a natural offshoot of the military’s main mission. “The U.S. military has been around for over 200 years,” serving America by deploying to war-zones around the world, he said. “Now its time to do what we need to do to get this country moving in the right direction.”

Late Update (4/13/10): Stein says in a statement that his group doesn’t support a military uprising, views President Obama as the legitimate commander-in-chief, and will follow all constitutional orders.