Los Angeles-area veterans fighting for land deeded to veterans care from the nineteenth century, but now being misused by the VA Medical Center in West Los Angeles continued their fight against veteran service organizations seen as dropping the ball and making common cause with the VA.

Below is an edited letter from Robert L. Rosebrock to the American Legion National Headquarters.

Apparently the American Legion, like the misinformed VA bureaucrats, is of the mistaken and feeble opinion that hanging the American Flag in the distress mode is “desecration.”

Mark Twain rightly noted and forewarned the negative consequences of such intolerant rigidity: “Loyalty to a petrified opinion never yet broke a chain or freed a human soul.” 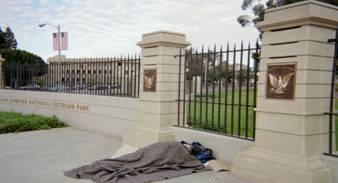 Correspondingly, a major VSO wrapping itself in the American Flag with haughty self-righteousness has never evicted one non-Veteran tenant from Veterans’ sacred property or prevented one fellow Veteran from being homeless.

On the other hand, hanging the American Flag with the Union down legally sends a “distress” signal that Veterans’ property at the Los Angeles National Veterans Home and the lives of 20,000 homeless Veterans in Los Angeles … are in extreme danger … and we need help, posthaste!
On July 4, 2009, Past National Commander David K. Rehbein published an article titled “Protecting Flag worth the effort.” The article expounded on the American Legion’s mission for a Congressional mandate prohibiting desecration of the American Flag, declaring: “The language of past amendments has been simple enough: “The Congress shall have power to prohibit the physical desecration of the flag of the United States.”

It’s obvious why the American Legion would not come to my defense, because the powers-that-be incredulously believe that our hanging the American Flag in the “distress” mode is “desecration,” and they want to distance themselves as far away as possible from the Old Veterans Guard and our noble cause, which is to simply enforce the Deed of 1888 that declares this land is “to be permanently maintained as a National Home for Disabled Volunteer Soldiers.” Read our “Grand Plan.”

The California Legion’s nebulous resolution written by Rees Lloyd is toothless and impotent … and collecting dust.

Unfortunately, the Legion shamelessly boasts a holier-than-thou Flag attitude instead of seriously defending the National Veterans Home and helping 20,000 homeless Veterans return to their “Home.”

This may come as a surprise to some American Legionnaires, but the Legion does not hold the license for love of our American Flag. There are approximately 25 million Veterans who pledged their lives to defend the American Flag, and we all love “Old Glory” just as much as the Legion’s 2.5 million members do … perhaps more.

Nonetheless, the American Legion needs to check out its own national website about the legality and protocol for hanging the American Flag in “distress.” http://www.legion.org/flag/code ….

As long as leaders of the American Legion wrap themselves in the American Flag with smug piety, they can never see the real desecration taking place on Veterans’ sacred land and truly understand that it is in extreme danger, as are the lives of thousands of homeless Veterans fending for their safety on the dangerous streets of Los Angeles … even struggling to survive outside the locked front gates of their rightful “Home.” ..

In summary, the American Legion has a lot of apologizing to do and amends to make, and it needs to start, posthaste.