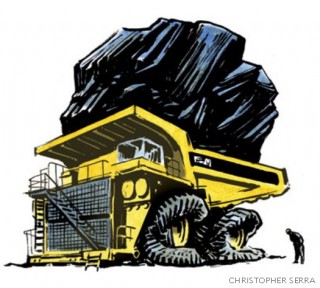 * By Robert S. Eshelman The Nation *

Scott Parkin, an organizer at the San Francisco-based Rainforest Action Network (RAN), is a straight-talking, get-things-done kind of guy, more at ease toiling behind the scenes in environmental struggles than serving as a personification of them. Yet in his fight against the coal industry he has embodied the qualities that define a new-model environmental movement in the United States. In the past four years this reinvigorated, multifaceted movement has chalked up an impressive–albeit frequently overlooked–series of victories against Big Coal, a leading contributor to domestic greenhouse gas emissions and a powerful lobby whose influence stretches from Congress to rural West Virginia courthouses.

A decade ago, the coal and utility industries began to push for the construction of a new generation of coal-fired power plants. Since then, 232 plants have been proposed. The environmental justice movement has defeated 127 of them. Not a single coal-fired plant was built in 2009. This past March, following several modest moves toward greater scrutiny of mountaintop removal permits in the past year, the Environmental Protection Agency announced that it was moving to block authorization of the largest mountaintop removal site in West Virginia, held by Arch Coal, an industry leader. Then, on April 1, the EPA proposed new water quality regulations for future mountaintop removal permits–imposing standards that very few, if any, mountaintop removal proposals would meet, as EPA head Lisa Jackson noted.

These victories have seriously set back–if not yet vanquished–an industry that accounts for nearly 40 percent of US greenhouse gas emissions and powers roughly half of US energy production. It’s as if the antiwar movement had brought the military’s recruitment efforts to a grinding halt. The coal industry’s ability to do harm–to the climate generally and to communities living in the shadow of coal plants or mining sites locally–has been significantly curtailed, and many in the environmental movement are beginning to speculate about the beginning of the end for Big Coal.

Read more at The Nation