A few months ago we ran stories on two of the very few national level political candidates willing to honestly focus debate on the continued occupation of Iraq and escalation of war in Afghanistan by the Obama administration. One was Candidate Marcy Winogard in California running against conservative Democrat Congresswoman Jane Harmon, who is in bed with the Defense Industry to keep the wars going; another is U.S. Senate Candidate Bob Krause of Iowa who was the first, and only, candidate running for a mainstream party against the party machine asking voters to seriously Rethink Afghanistan.  We at Veterans Today are willing to endorse any political candidate willing to at a minimum bring serious debate not partisan political talking points to the national primary and later general election in November 2010.

Bob Krause, Iowa Democratic Candidate for the U. S. Senate, in early April renewed his call for the United States to withdraw from Afghanistan.  He pointed to the April 6 revolution in Kyrgyzstan as proof of the fragility of the U. S. position in Afghanistan.

“Kyrgyzstan has a critical [U.S. Air Force] base that supports U. S. supply lines from the north into Afghanistan, and now that base may be in immediate jeopardy.  Already the New York Times reports that U. S. military shipments into Afghanistan are being delayed and re-routed because of this.  To make matters worse, the winners in the revolution appear to be angry at the U. S. for supporting the previous dictator and could deny use of the base for an extended period of time.

If we lose our access to Afghanistan from the north, it will be expensive and difficult to replace, and will force us to rely primarily on the Khyber Pass through Pakistan as our only logistics route.  The Khyber pass then becomes the potential cork in the bottle for our military logistics system.”

“What we need to do is to get out. Afghanistan is simply too far afield – both logistically, and from our national strategic interests.  If we press on Russia from the south by fighting to maintain this supply base in a part of the former Soviet Union, we do ourselves no good.  Safety of supply lines is a critical element of any military strategy, and now we do not have that to any good degree.

“We are somewhat akin to where we were in the Georgia invasion crisis in 2008.  There is no good military or logistic scenario to defend our interests in this case, and that is a direct consequence of following the neo-conservative philosophy of over-extension of the American security umbrella.”

Krause further pointed out that the cost of the Afghanistan war has been estimated as high as $172 billion per year, in a 2009 estimate put forth by the National Priorities Project. “It is undoubtedly higher than that now,” said Krause.

“We need to focus on rebuilding U.S. infrastructure and creating jobs in the U. S., and this kind of money could do a tremendous amount of good in America.  Why are we spending it over there in this time of severe economic crisis?” concluded Krause.

Candidate Krause fails to mention that unlike Afhganistan, Kyrgyzstan also borders China to the southeast. Any instability of the former Soviet republics will not only be of intimate interest to Russian national security but China’s. China and Russia both depend on natural gas among other resources in the area and could eventually view any disruption of such resources to further fire up their economy as a threat to their national security. Note that the Asian look of many Kyrgyzstan citizens is due in part to the proximity of the nation to China.

Most American Voters are not going to have a clue where Kyrgyzstan is or what role the country plays in our military operations in Afghanistan. In fact, most Americans did not know where Afghanistan was until U.S. Troops set boots on the ground. 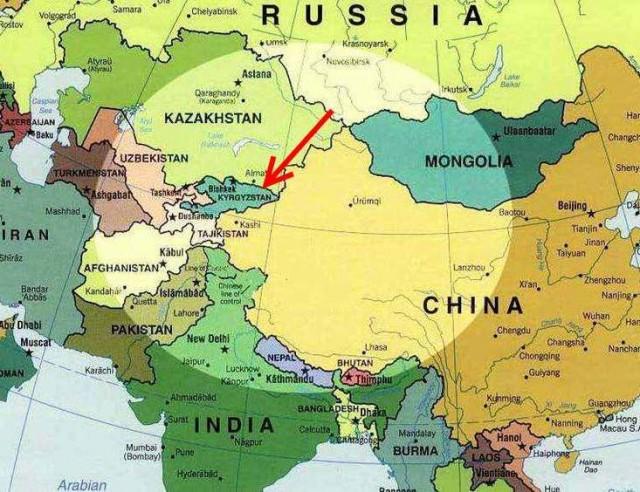 Kyrgyzstan is the small former Soviet Republic marked in green on this imaget. It is northeast of Kabul, Afghanistan with Tajikistan bordering the two Islamic nations. Kyrgyzstan also borders China and is still viewed as essential to Russia’s national security.

We felt a background on Kyrgyzstan would best articulate Candidate Krause’s concerns in a way that most American voters could relate to. However, the reporting is translated so allow for best English translation. 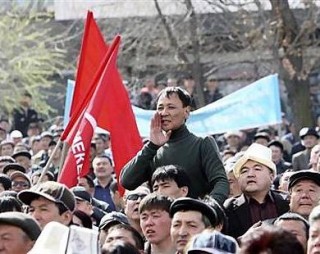 Our background on the Kyrgyzstan revolution of 2010 comes from JOTMAN.COM contributor Sanjuro, tracking Russian language media reports. Sanjuro alerts us that Kyrgyzstan appears to be undergoing a revolution.  If successful, the event will be Kyrgyzstan’s second revolution since 2005 (the “Tulip Revolution.“).  Sanjuro informs us:

The Russian language section of the newspaper Ferghana says “it’s the second day of the revolution, not fully successful – yet”, but cautiously optimistic meaning it’s pro-opposition. 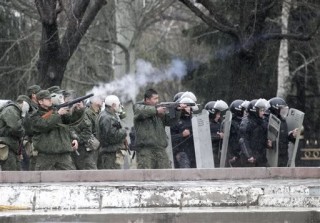 As of yesterday [April 7] and earlier today [April 8], law enforcement and opposition are clashing in the streets in the Bishkek, with the opposition largely prevailing. The opposition firmly controls the Northern provinces, the south is in the swing mood – they used to be more pro-government. From Gazeta it seems that the President Bakiyev is either hiding or already fled the country.  Just two weeks ago Bakiyev announced his intent to finally alter the Constitution to abolish elections etc. Ferghana news agency doesn’t know where he is.

… The opposition is weak and fragmented. A coalition of opposition parties united behind Almazbek Atambayev in the 2009 presidential elections but only received 8% of the vote. Atambayev is nowhere to be seen during the recent unrest. Roza Otunbayeva, the leader of the Social Democratic Party and key member of the Tulip Revolution, has been the face of the protestors. Sadly, like the last time around Otunbayeva and company seem caught off guard and genuinely surprised at the ability of a popular uprising to unseat the government. In order to maintain any semblance of credibility the opposition will have to act quickly to stop looters….

What Use is Kyrgyzstan to the U.S.?

Kyrgyzstan has a youthful population. Out of the country’s 5 million inhabitants, one third is under the age of 15.   Two thirds of the people live in the rural countryside, where half the country’s labor force devotes itself to agriculture.  According to Reuters, a key source of foreign revenue was migrant workers in Russia, but since the Russian economic slowdown many have returned home.  Kyrgyzstan’s Kumtor Gold Mine, which opened in 1997, is based on one of the largest gold deposits in the world.

In addition to gold, Kyrgyzstan has one other dependable source of foreign currency:  Kyrgyzstan hosts both a Russian and American military airbases (the US base came about as a result of the 2001 invasion of Afghanistan).

Reuters notes: “Kyrgyzstan’s parliament voted in February 2009 to approve the closure of the U.S. base after securing pledges of $2 billion in aid and credit from Russia.

Washington later agreed to pay $180 million to Kyrgyzstan to keep the base open.”


“U.S. General David Petraeus met leaders in Kyrgyzstan in March 2010, a day after the United States said it would build an anti-terrorism center there. The visit by Petraeus was likely to irritate Moscow which has seen Kyrgyzstan as part of its sphere of influence. The presence of the two bases has come to symbolize Russia-U.S. rivalry in the region.”

____
*Usually Ferghana.ru (fergana.ru) is the best source of Central Asian news, but this time they are a bit late with an English language update.

Veterans Today Editorial Note: It may be reality that Russia would not only possibly fund, support, and instigate any local uprising of elements unfriendly to the United States, but it may also be in China’s interest to fund, supply, and support revolutions with the aim of curtailing U.S. military ambitions in a region too close to their border for comfort. It has been noted on one right-wing leaning Neo-Conservative website catering to mercenaries that both sides the police and insurgents in Kyrgyzstan are armed with AK47s and related Russian and Chinese produced weapons NOT U.S. or Israeli supplied weapons.