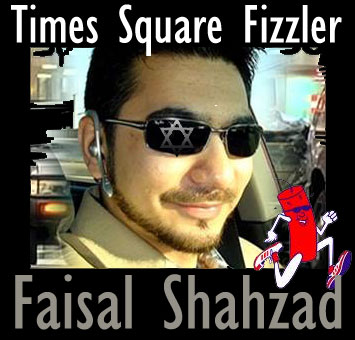 Watching the news on the arrest of the Time Square bomber, or as we will call him, “the Time Square Fizzler,”  and the flood of political attacks on the president and news reports condemning Pakistan and Islam make it all clear as a bell.  The ‘highly trained’ terrorist, supposedly schooled in explosives and ‘secret agent stuff’ is another patsy.

Think “Mumbai” and the recent trial.  All our suspect could say, over and over, knowing he is doomed is that he was ‘set up.’

With the Pakistan Taliban the biggest security risk for the only Islamic nuclear power, they became extremely attractive to India and Israel some time ago.  Noting that India has been given free rein to run intelligence operations on the Pakistani border, they and their good friends in Israel, have flooded the region with “helpers” busy recruiting, training and supporting attacks, primarily on Pakistan.

Some time ago, it was warned that these Indian and Israeli trained groups that the US had knowingly allowed, and admitted to, would be used against the United States.  Welcome to that world.

Last month, while in Pakistan with Jeff Gates and Raja Mujtaba, a number of supposed Germany “contractors” working for, well, we don’t know, were seen in Islamabad.

They were not hard to identify for some of us and Jeff confronted them about their real nationality.  Later, in private discussions with officials, whose identities we were asked to withhold, we confirmed that even Pakistan has a significant presence of Israeli “visitors” who can use their endless alternative identities and contracting relationships to move wherever they want.

Pakistan’s dependence on American fund to fight terrorism has left them helpless to oppose this openly.  With America under the thumb of Israel and Pakistan their biggest target, America’s mixed loyalties has led to a very disturbing situation.  Imagine having to invite a dangerous criminal into your home because your rich uncle loves him?

You now have an idea of the dynamic involved.

Watching the arrests and news stories is a wonder, seeing a “no fly list” person move in and out of America freely is amazing.

With a Pakistani visa in my passport, signed by their Defense Attache to Washington, I was held up last week from an Air France flight.  I need more Israeli friends if I want to get thru airports quicker.  Only after Homeland Security was notified, did I get on a plane.

This was good.  It was efficient.  I appreciated the security and everyone was highly effective and doing their jobs.

However, were I a “no fly list” terrorist, I could have gotten right thru.

However, were I the “crotch bomber” with no passport at all, I would have gotten right thru, right thru security in Israeli run airports.

As the news stories drone on, this will become clear.  The ‘trained terrorist’ will be tied to a huge network of idiots and dupes, all working in the region along the Afghani/Pakistan border, an area where India, and their Israeli friends, really do train terrorists who kill hundreds with real bombs in Pakistan.

Nobody will ever learn how our friend got thru airports or who helped him.  More and more videos from the Pakistan Taliban will come forward, all serving to bring a rain of ruin on them but damning Pakistan and raising sympathy for India and Israel.

Israeli controlled Fox News, yes, that is who runs it, will continue to drone on.

Everyone will be happy except for the worlds Muslims, who will continue to be damned as, not only terrorists but idiots as well.

We have a clever enemy who has no shortage of Muslim stooges to drag out of his bag of tricks.  Playing one group of Muslims against another is a profitable game.  We have just seen a move in it.