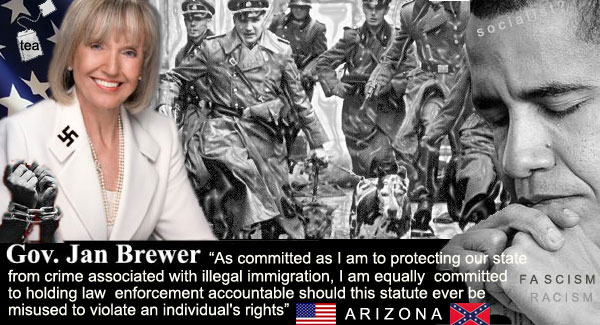 State schools chief Tom Horne, who has pushed the bill for years, said he believes the Tucson school district’s Mexican-American studies program teaches Latino students that they are oppressed by white people.

Public schools should not be encouraging students to resent a particular race, he said.

“It’s just like the old South, and it’s long past time that we prohibited it,” Horne said.

Brewer’s signature on the bill Tuesday comes less than a month after she signed the nation’s toughest crackdown on illegal immigration — a move that ignited international backlash amid charges the measure would encourage racial profiling of Hispanics. The governor has said profiling will not be tolerated.

The measure signed Tuesday prohibits classes that advocate ethnic solidarity, that are designed primarily for students of a particular race or that promote resentment toward a certain ethnic group.

The Tucson Unified School District program offers specialized courses in African-American, Mexican-American and Native-American studies that focus on history and literature and include information about the influence of a particular ethnic group.

For example, in the Mexican-American Studies program, an American history course explores the role of Hispanics in the Vietnam War, and a literature course emphasizes Latino authors.

Horne, a Republican running for attorney general, said the program promotes “ethnic chauvinism” and racial resentment toward whites while segregating students by race. He’s been trying to restrict it ever since he learned that Hispanic civil rights activist Dolores Huerta told students in 2006 that “Republicans hate Latinos.”

District officials said the program doesn’t promote resentment, and they believe it would comply with the new law.

The measure doesn’t prohibit classes that teach about the history of a particular ethnic group, as long as the course is open to all students and doesn’t promote ethnic solidarity or resentment.

About 1,500 students at six high schools are enrolled in the Tucson district’s program. Elementary and middle school students also are exposed to the ethnic studies curriculum. The district is 56 percent Hispanic, with nearly 31,000 Latino students.

Sean Arce, director of the district’s Mexican-American Studies program, said last month that students perform better in school if they see in the curriculum people who look like them.

“It’s a highly engaging program that we have, and it’s unfortunate that the state Legislature would go so far as to censor these classes,” he said.

Six UN human rights experts released a statement earlier Tuesday saying all people have the right to learn about their own cultural and linguistic heritage, they said.

“The governor believes … public school students should be taught to treat and value each other as individuals and not be taught to resent or hate other races or classes of people,” Senseman said.

Arce could not immediately be reached after Brewer signed the bill late Tuesday.