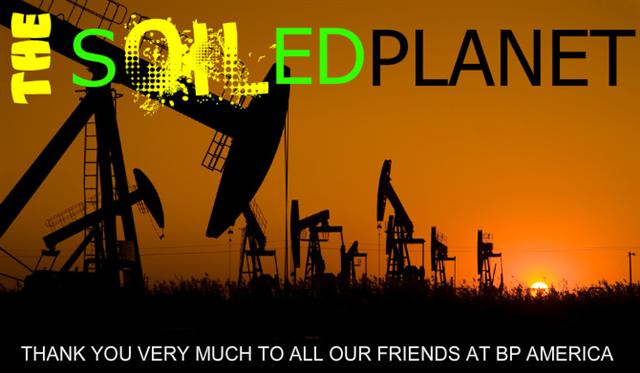 The drill-baby-drill fools will scream: “Socialist!” So what?

Taking over BP is needed, and is actually very smart politics.

It will be BP, Sarah Palin and the neocons v. Obama, the environmentalists and the American people. Rambo, are you listening?

It’s time for the federal government to put BP under temporary receivership, which gives the government authority to take over BP’s operations in the Gulf of Mexico until the gusher is stopped. This is the only way the public know what’s going on, be confident enough resources are being put to stopping the gusher, ensure BP’s strategy is correct, know the government has enough clout to force BP to use a different one if necessary, and be sure the President is ultimately in charge.

If the government can take over giant global insurer AIG and the auto giant General Motors and replace their CEOs, in order to keep them financially solvent, it should be able to put BP’s north American operations into temporary receivership in order to stop one of the worst environmental disasters in U.S. history.

The Obama administration keeps saying BP is in charge because BP has the equipment and expertise necessary to do what’s necessary. But under temporary receivership, BP would continue to have the equipment and expertise. The only difference: the firm would unambiguously be working in the public’s interest. As it is now, BP continues to be responsible primarily to its shareholders, not to the American public. As a result, the public continues to worry that a private for-profit corporation is responsible for stopping a public tragedy.

Five reasons for taking such action:

1. We are not getting the truth from BP. BP has continuously and dramatically understated size of gusher. In the last few days, BP chief Tony Hayward has tried to refute reports from scientists that vast amounts of oil from the spill are spreading underwater. Hayward says BP’s sampling shows “no evidence” oil is massing and spreading underwater across the Gulf. Yet scientists from the University of South Florida, University of Georgia, University of Southern Mississippi and other institutions say they’ve detected vast amounts of underwater oil, including an area roughly 50 miles from the spill site and as deep as 400 feet. Government must be clearly in charge of getting all the facts, not waiting for what BP decides to disclose and when.

2. We have no way to be sure BP is devoting enough resources to stopping the gusher. BP is now saying it has no immediate way to stop up the well until August, when a new “relief” well will reach the gushing well bore, enabling its engineers to install cement plugs. August? If government were in direct control of BP’s north American assets, it would be able to devote whatever of those assets are necessary to stopping up the well right away.

3. BP’s new strategy for stopping the gusher is highly risky. It wants to sever the leaking pipe cleanly from atop the failed blowout preventer, and then install a new cap so the escaping oil can be pumped up to a ship on the surface. But scientists say that could result in an even bigger volume of oil – as much as 20 percent more — gushing from the well. At least under government receivership, public officials would be directly accountable for weighing the advantages and disadvantages of such a strategy. As of now, company officials are doing the weighing. Which brings us to the fourth argument for temporary receivership.

4. Right now, the U.S. government has no authority to force BP to adopt a different strategy. Saturday, Energy Secretary Steven Chu and his team of scientists essentially halted BP’s attempt to cap the spewing well with a process known as “top kill,” which injected drilling mud and other materials to try to counter the upward pressure of the oil. Apparently the Administration team was worried that the technique would worsen the leak. But under what authority did the Administration act? It has none. Asked Sunday whether U.S. officials told BP to stop the top-kill attempt, Carol Browner, the White House environmental advisor, said, “We told them of our very, very grave concerns” about the danger. Expressing grave concerns is not enough. The President needs legal authority to order BP to protect the United States.

5. The President is not legally in charge. As long as BP is not under the direct control of the government he has no direct line of authority, and responsibility is totally confused. For example, listen for the “we” and “they” pronouns that were used by Carol Browner in response to a question on NBC’s “Meet the Press” Sunday (emphasis added): “We’re now going to move into a situation where they’re going to attempt to control the oil that’s coming out, move it to a vessel, take it onshore ….We always knew that the relief well was the permanent way to close this .… Now we move to the third option, which is to contain it. If [the new cap on the relief well is] a snug fit, then there could be very, very little oil. If they’re not able to get as snug a fit, then there could be more. We’re going to hope for the best and prepare for the worst.” When you get pronoun confusion like this, you can bet on confusion — both inside the Administration and among the public. There is no good reason why “they” are in charge of an operation of which “we” are hoping for the best and preparing for the worst.

The President should temporarily take over BP’s Gulf operations. We have a national emergency on our hands. No president would allow a nuclear reactor owned by a private for-profit company to melt down in the United States while remaining under the direct control of that company. The meltdown in the Gulf is the environmental equivalent.

[Robert Reich is Professor of Public Policy at the University of California at Berkeley. He has served in three national administrations, most recently as secretary of labor under President Bill Clinton. He has written twelve books, including The Work of Nations, Locked in the Cabinet, and his most recent book, Supercapitalism. His “Marketplace” commentaries can be found on publicradio.com and iTunes.]