By James Herron in the WSJ

American political rhetoric has a long tradition of folksiness. If you want to get far in public office in the U.S., being able to wax lyrical about the strength and wisdom of real American families is a must.

Politicians have varied success in this. Professorial Barack Obama has struggled to connect with regular people. For populist Sarah Palin, veneration of “real Americans” is a substitute for policy. 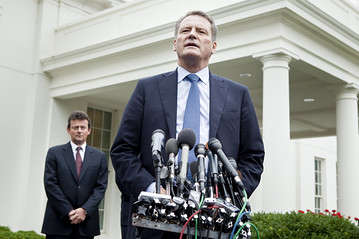 Getty Images
– BP Chairman Carl-Henric Svanberg speaks to the press outside the West Wing of the White House on Wednesday, with BP chief Tony Hayward –

But in the White House Rose Garden on Wednesday afternoon, BP Chairman Carl-Henric Svanberg set a new low in this form of political rhetoric. [See YouTube clip of the event here.]

Unsurprisingly, assurances from the tall Swedish millionaire that he will take care of them did not go down well with the small people themselves and instantly eroded the goodwill BP had just purchased at a hefty $20 billion price tag in its negotiations with Obama. [Read our coverage here.]

Svanberg later apologized for his clumsy choice of words, and a BP spokesman attributed it to an error in translation. But BP’s chairman really should have known better before he tried to mirror Obama’s earlier tribute to struggling families on the Gulf Coast facing the extinction of their livelihoods from the spill. This kind of rhetoric is rarely used effectively in Europe, where politics and business are dry, dispassionate affairs in comparison to the heartstring tugging antics on the other side of the Atlantic. This fact is underlined by the ultimate irony that, until this week, Svanberg was regarded as fairly media-savvy on his home turf.