Home Government Wake up, Mr. President – The GOP has Launched a Jihad Against...

Wake up, Mr. President – The GOP has Launched a Jihad Against America
We all know you’re a nice guy, Mr. President, but this is a seminal moment in American history. The Republican Party has revealed themselves to be the American Taliban. They’re inciting insurrection, protecting corporate corruption, denying unemployed Americans subsistence, and they threaten to cripple the nation as a whole with their irresponsible use of the filibuster. The Republican agenda is to keep America ignorant and miserable at any cost. So at this point we don’t need nice, we don’t need bipartisanship, and we don’t need a diplomat. What we need at this point in our history is a Commander-in-Chief to lead us in the fight against Republican tyranny. So it’s time to suck it up and “fix bayonets,” sir.
* 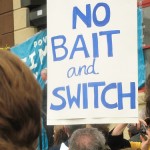 The Republican Party is a coalition of three separate constituencies with confluent interests. The first group is made up of traditional conservatives. These are highly patriotic Americans who believe in limited government, the primacy of the people over government, and fiscal responsibility. But the other two groups that have coalesced within the GOP are much more malevolent – international business interests, and social bigots.
*
It is the former of these two, international business, that controls the GOP. It’s made up of highly educated individuals with huge resources and plenty of clout – and they use every bit of their resources and clout to manipulate what has become their citizen army – the social bigots. The social bigots are the people we see armed to the teeth at presidential speeches, disrupting townhall meetings, and fighting against their own interests. In short, these are the “Joe the Plumbers” of the world.
*
While the traditional conservatives are legitimately concerned about the direction of the country and assuring that the nation remains fiscally sound, big business could care less about the condition of the American people, because for the most part, they’ve become international in scope. That should be clear to anyone with eyeballs, considering how they first, created an economic crisis in this country, then used the very crisis that they created to gouge the American people.
*
So all big business is concerned about is making money at our expense, and more often than not, to our detriment. These are the very same people who have gouged America dry, given themselves huge bonuses, then rented post office boxes in other countries to avoid paying their fair share of taxes.
*
And if that isn’t bad enough, these corporations then used the very money that they avoided in taxes to buy politicians, who are suppose to be representing us, to feather their nests even further. They’re also using the incredible wealth that they’ve managed to maintain – again, thanks to our tax dollars – to clog our airwaves with propaganda in order to incite every undereducated social bigot within earshot to near insurrection. They’re using these people to distract us from examining the true issues that would serve to protect us from their greed.
*
And the social bigots are easy targets – not only because they have less than a tenuous grasp on reality, but in many cases, they’re willing stooges. These are not true victims. Due to their bigotry – and I don’t mean simply racial bigotry, but bigotry against anyone who doesn’t happen to share their beliefs – and anger over losing the last election, they’re willing to accept any kind of nonsense disseminated about the government, and you, Mr. President, in particular. Due to that blind anger they’re perfectly willing to not only accept the most blatant nonsense, but they’re also willing to cut their own throats, and that of their families, if it means striking a blow in the name hatred.
*
Take the issue of socialism, for example. Shouldn’t even the most misguided idiot understand that there’s a big difference between the government protecting its citizens from the greed and predatory business practices of large corporations, and their claim that government is taking over the free enterprise system?
*
Even a child should recognize that some things are just too important to our society to be left to for-profit business interests. Those things include police, fire, national defense, and public healthcare. Imagine calling the police to report your daughter has been raped or kidnaped and the police inform you that they were sorry but there was nothing they could do – your daughter just turned 18, so she’s no longer covered in your rape/kidnap policy.
*
But the social bigots can’t see that – they don’t want to see it – because they’ve been whipped into a mindless frenzy by the corporate media. Yes, I said mindless – anyone who can be convinced to demonize the very person who is trying to protect THEIR families from corporations that just two years earlier came close to gouging them into another Great Depression, is by definition, ignorant and brainwashed.
*
That’s a dangerous level of stupidity, Mr. President, and it is essential that you recognize that fact. You simply cannot be reasonable with people like that. Neville Chamberlain tried it prior to WWII. It didn’t work then, and it’s not gonna work now.
*
So you need to drop this (I’m sorry, Mr. President) irrational need to cater to these people. Yeah, I said it – irrational. That’s why you’re dropping in the polls. You’re putting so much effort into catering to people that you’ll never win over, that you’re allowing them to dilute legislation that they have no intention of voting for, and they’re causing you to turn your back on the people who elected you.
*
Yes, Mr. President, you’ve accomplished a great deal in your short tenure – probably more than any other president in modern times. But unfortunately, you’re also being judged on what you’re FAILING to do. For example, Bush and Cheney should be under indictment for war crimes by now. You simply cannot sidestep your failure to act in this area. This is not a political issue where there’s room for debate. This issue represents the rule of law, and the rule of law is THE most important component in any democracy. You’re a constitutional scholar – you should know that.
*
You promised us a change we could believe in, Mr. President, but frankly, I ain’t feeling it. So as Duke Ellington used to say, “We love you madly,” but your falling poll numbers is our way of telling you, this ain’t what we voted for.
*
So suck it up, my man, and be all that you can be.
*
Eric L. Wattree
wattree.blogspot.com
[email protected]