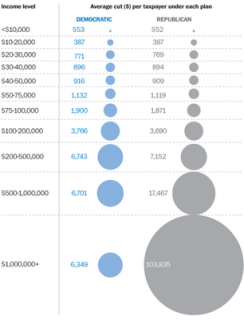 During his first term, President Bush enacted two rounds of tax cuts.  Before the cuts, Americans paid on a sliding scale from 15% to 39.6%. After the cuts, the scale was 10% to 35%. President Obama wants to renew the tax cuts for couples and individuals making less than $250,000 per year, and allow the cuts to lapse on America’s wealthiest. Republicans argue that any tax increase whatsoever, be it on the rich or poor, is a bad idea.

Democrats respond that Obama’s plan would make a decent dent in the deficit, which seemed very important to Republicans back when they were arguing against the Health Care bill. Republicans point out that millions of Americans report small business expenses on their personal tax forms, which puts their income into the $200,000-plus danger zone, and thus, Obama’s plan discourages small business investment.

Democrats respond that declaring small business deductions for tax purposes is not the same as owning or running a small business. While 36 million taxpayers reported “small business income” in 2009, only 6% of Americans earn more than half of their income from a business they own. We’re told that allowing the tax cuts to lapse will gouge neighborhood dry cleaners and donut-shop owners. But in reality, not everyone who files a Schedule C or F in April has a “business” as such. Taxpayers can declare income as “small business” if they do consulting or public speaking on the side, possess a “home office” or belong to a small law firm or medical partnership. Democrats point out that if tax cuts for the wealthy are allowed to lapse, only 2.5% of those who declare “small business” deductions will be taxed at the higher rate.

Obama does plan to allow the capital gains tax cuts to lapse, which means that the top rate of tax on long-term capital would rise from 15% to 20%. Republicans argue that such an increase creates a chilling effect on investment. However, Democrats point out that, according to the Congressional Budget Office, income from interest, dividends and capital gains amounts to less than 5% of the incomes of all but the most wealthy investors.

Obama’s supporters insist the President only wants the mega-rich to pay their fair share. For example, the top 400 earners in 2007, who earned an average of $340 million each that year, paid only 17% of their income in taxes. Even under the Bush-era tax cuts, middle-class families paid more.  Eliminating the Bush tax breaks for the very rich would save the taxpayers more than seven hundred billion dollars over the next decade. That money would make a good dent into the long-term budget deficit, and it could be used to make public sector investments that are sorely needed, for example, putting money into education, roads and bridges, health care and new sources of energy.

Republicans have long argued that lower taxes for the rich is good for the economy, because they spend more. Democrats point out that when taxes have been lowered for the rich, specifically Reagan’s tax cuts in 1981-83 and Bush’s tax cuts, the wealthiest don’t actually spend more, but rather, invest in bubble-prone economic activity, such as real estate speculation, and schemes that gave us the Enron and Savings & Loan debacles. Indeed, the economy is not improved by giving cash to people already sitting on lots of it.  U.S.A Today reports that today, non-financial companies in the Standard & Poor’s 500 are holding onto a record $837 billion in cash, which is enough to pay 2.4 million people $70,000-a-year salaries for five years. But they’re not hiring. They’re waiting for the next high-yield investment opportunity, and neither the waiting, nor the investments themselves, will create jobs. However, reducing taxes for people who are likely to spend on everyday needs, does create jobs. If you give money to someone who’s not seen a decent paycheck in a while, that money will end up at the local supermarket or department store. It will put people to work. Mark Zandi, Chief Economist for Moody’s Analytics, produced a study that compares the actual returns on various types of federal spending. The highest rate of return in genuine economic production was tax money spent on unemployment. That’s right. Your basic much-maligned unemployment check gives a return of $1.61 into the economy per each dollars spent. Contrary to what Republicans claim, if you want to “prime the pump” and create economic recovery, the best way is to give money to those who have very little of it. They will spend it on necessities, i.e. products that other Americans must manufacture, build, or grow. What America suffers from right now is a “demand” deficit. If you lower taxes for working people, they will spend it. They will create demand.

In the coming months, the President will have to decide which of the Bush-era tax cuts to make permanent, and which cuts should lapse. Republicans will frame the discussion as “The Obama tax increase.” In such an environment, it’s easy to forget that Obama has decreased taxes.  As part of the stimulus package, Obama cut taxes for 95 percent of working families, small businesses, first-time homebuyers, and for 8 million Americans paying for college. But since the so-called stimulus did very little to decrease unemployment, it’s considered a failure. But nonetheless, there was a genuine tax cut hidden beneath all those grant projects.