(San Francisco) – Israel, a nuclear weapons armed colossus in the Middle East, fights a lot of wars with two small, almost defenseless neighboring countries – Lebanon and Gaza. The 2006 War with Lebanon took a turn for the worse, though.

Israel executed an emergency purchase for 100 plus US GBU-28 5,000 lb, or 2,722 kg, weaponized uranium aerosol bombs from their patron, the United States.

The GBU-28 is a cobbled together weapon consisting of an approximately 20 ft long surplus artillery barrel stuffed with uranium ballast and high explosives. It is very good for the delivery of a particular form of poison gas – a War Crime under several international treaties and US Law. But, who cares? the bomb’s victims? That hardly matters at all in the scheme of things. 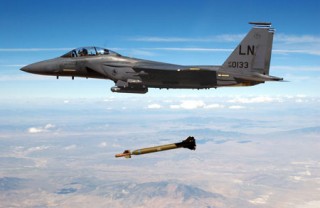 The 100 plus GBU-28s were a very high priority purchase. Congress was duly notified and the very efficient government weapons sales office swung into action.

What is so special about a GBU-28 with about 4,000 lbs, or 1,818 kg, of uranium ballast, other than it’s manufacture, shipping, storage and use is a War Crime punishable by Death or Imprisonment?

The US Military long ago figured out the optimum explosive package to guarantee creation of highly effective radioactive, poisonous uranium aerosols from the GBU-28’s uranium ballast.

Sub-nanometer length ceramicized particles go right through clothing and skin, even a full MOPP suit offers no protection to the wearer. This puts all soldiers  and civilians in the area in the “Throw Away” column. Anyone in the Target Area will get Zapped, it is just a matter of time.

The combination of small size, electrical charge, radioactive emissions and Brownian Motion conspire to keep the invisible, odorless, tasteless metal particles mobilized in the lower atmosphere for a long time.

Where did the IDF Bomb?

The short, intense bombing event occurred in the last days of the Lebanon Israeli  War. The bombing was concentrated just north of the shared Israeli Lebanese border. Both sides of the border are rural farming areas, both sides were subject to poison gas in the form of about 400,000 lbs, or 184,818 kg, of radioactive aerosols in two days.

The contaminated fruits and vegetables were ultimately sold and presumably consumed in the European Union, Israel and Lebanon, as well as other participating trading partner countries.

Shortly before the bombing, Israeli Jews were removed from the area.  After the bombing anti-Zionist Jews were moved in to work the radiologically contaminated Israeli farms by the Israeli Defense Forces. As one person commented, “Y’know, the Orthodox guys with long sideburns that nobody likes.”

The IDF bombed Southern Lebanon at the Israel/Lebanon border. Then they moved in famously anti-Zionist Jews to the newly radioactive and invisibly contaminated part of Northern Israel.

This is a characteristic absolute, no holds barred condemnation of the Zionists by Hasidic Jews published on August 22, 2010:

“According to the Satmar rebbe, Zionism is a total violation of the Torah. “If we were to take all the violations of the generation and the many transgressions committed around the world and placed them on one side of a scale and the Zionist state on the other side, it would be overwhelmingly decided that it is root of all impurity and damage in the entire world and contaminates the entire world,” the rebbe wrote in the pamphlet.”

Did the IDF know that poison gas spreads? The inability to predict or control poison gas is pretty standard stuff – it is well known since its use in WWI. As a result of this and other FUBAR moves, the Sperm count of 18 year old males plummeted 40% in less than 10 years. Just because a person can’t see radiation doesn’t mean it is not dangerous. Now the whole nation must pay a terrible price.

On the Extinction Road.

Another country that is on the road to extinction is Italy. The Total Fertility Rate has hovered between 1.2 and 1.3 for the past ten years. That is a far cry from the average of slightly more than two children per woman required to maintain the population at the present number. The number of children each woman has over her life time of fertility must be higher than that for growth to occur.