A water truck backs up to the Euphrates River in Iraq.  The driver, a Ugandan or maybe an Ethiopian, gets out, lowers a hose into the sewage ridden flow and fills his truck.  5 miles away, a US Army water purification center sits, too far away.  The driver thinks, “water is water.”  Another of the Pentagon’s “Zombie Contractors” take their toll, part of the army of “undead” and unqualified who are the world’s most expensive work force.

The driver, an employee of a company once headed by the Vice President of the United States, could care less, clean water, filth or sewage, it is only going to American troops as drinking water.

The words “typhoid” or “hepatitis” mean nothing to him, he has never heard them and certainly didn’t read them in his daily log.  He never reads anything, never has and never will as he is illiterate like tens of thousands of other employees that the American taxpayer is coughing up $1000 a day for, even more, sometimes much more.

The driver considers himself well paid at $10 dollars a day.

The troops drinking the water would only find out weeks later that it was contaminated with sewage.  Similarly, 33 American soldiers have been electrocuted by faulty wiring installed by work crews that wouldn’t know “positive” from “negative.”  The Pentagon paid for journeymen and got third world unemployed, swept up off the streets, trucked out of the slums of Africa or South America, many decent and hard working people but to the contracting firms, American, British and Israeli, mostly, they are nothing but a way of defrauding the Pentagon, something any child could do.

The Pentagon doesn’t care, not as long as the company’s politics are right and, under the Bush administration, “right” meant extreme right.

Americans have been told the hundreds of thousands of highly paid contractors in, not only Iraq and Afghanistan but throughout the Middle East, were veterans, most Marines, Rangers, Seals and Special Forces, paid a thousand dollars a day to put their lives on the line and, in the process, building a “net egg” for their lives, should they survive and return home.  The controversy, we were told, was that our active duty troops only made a fraction as much.  This story, however, was only meant to deceive, dissemble and misinform. Yes, many veterans hold security contracting jobs and pull down high dollars but the truth is far different than we were told.

One contracting firm, handing security for the United States Air Force, had over 8000 employees in Afghanistan.  All were assumed to be Rangers, SAS or other combat vets.  In reality, only 6 were trained military veterans from these services.  Every other employee was, not only “third world” but also never trained or former members of military forces rated, frankly, as armed rabble.

Some received their miliary training with organizations, if not yet on terrorist lists, they should be.

The Pentagon paid nearly as much for one of these shoeless, uneducated and untrained contractors in a week as a flag officer makes in a month, actually more than that, embarrassingly more.

What are these contractors paid, who sees if they are qualified or even checks if they are wanted criminals?  Well, actually, no one.  Americans, veterans serving in Iraq and Afghanistan go through security screenings, rigorous and continual,even humiliating drug testing but the majority of their fellows, including tens, maybe hundreds of thousands of “kitchen workers” or related professions could be anyone, could be and certainly are. 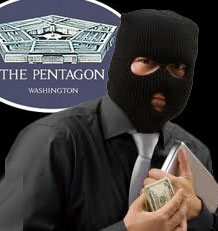 Questions come to mind.  Why would the most expensive and highest paid military force on earth with the most technologically advanced surveillance systems imaginable need to be guarded by third world nationals cited for performing their duties in filthy shorts, no shoes or shirt and carrying an aging rusted Soviet weapon from a scrap heap?

Have you noticed you have never seen one of the thousands of real security contractors from Ethiopia, Somalia, Sudan, Congo, Uganda and other areas of Africa in photographs?  All you see are burly ex-Marines, armed to the teeth.

Ever see a photograph of the living quarters for the other workers, the ones who clean the toilets, cook the food, and outnumber our troops?  Why are they hidden?  Is something wrong?  Why the secrecy?  Are we too busy photographing troops tiptoeing  through poppy fields to look into the issue of “guest workers.”  How do the Pentagon’s favorites, the “no-bid” boys get away with over-billing billions for “mercenaries” when, in actuality they are supplying house maids, janitors dishwashers and billing as though they were all hedge fund managers.

For those who are working “security,” for each burly ex-Ranger, there are a hundred near starving Ethiopians being paid “cigarette money.”  Try finding a photograph of one of them.  You stand as much chance of finding nuclear weapons assembly videos.

At least the mercenary army, shoes or no shoes, has weapons that work, no matter how old or dirty.  The Pentagon has more games than simply throwing away billions to pay workers that may not exist.  There is big money in defective weapons also.

Yes, we admit, a 30 year old AK 47 assembled in Nigeria is less likely to jam in combat than the M-4 carbine, according to every test ever run.  We could talk about the boondoggle “single source” contract, spending hundreds of millions on a weapon troops not only don’t trust but has proven useless in the long range combat of Afghanistan.  We could talk about where 250,000 AK 47’s, not junk, but new “top of the line” models with forged receivers simply disappeared.

Our hope is that they ended up at the bottom of the Euphrates River, dumped, truckload after truckload by impatient Rwandan truckers looking to shorten their workday.  I am sure we will be seeing those weapons again, not at a local gun show in Colorado, but “business end first” during our next “endless war” but I digress.

What don’t we know about who we pay hundreds of billions of dollars for?

At one time I was told the US Army had 125,000 kitchen workers in Iraq alone.  Then I was told the figure was actually much higher.  The total contractor figure, during the time of our highest troop deployments was three times that of the number of soldiers in theater.  Who are they and what are they paid?  Nobody knows, in particular, congress, the General Accounting Office and the Department of Defense and no one is asking.

We don’t have a remote idea what any of the contractors actually do, where they live, what their jobs are and if they do them at all or if they actually exist at all.  We simply pay and pay.