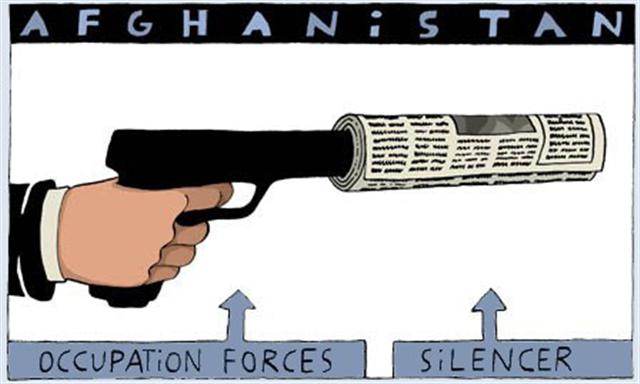 – Twelve American soldiers face charges over a secret “kill team” that allegedly blew up and shot Afghan civilians at random and collected their fingers as trophies. –

by Chris McGreal in by the Guardian/UK

Five of the soldiers are charged with murdering three Afghan men who were allegedly killed for sport in separate attacks this year. Seven others are accused of covering up the killings and assaulting a recruit who exposed the murders when he reported other abuses, including members of the unit smoking hashish stolen from civilians.

In one of the most serious accusations of war crimes to emerge from the Afghan conflict, the killings are alleged to have been carried out by members of a Stryker infantry brigade based in Kandahar province in southern Afghanistan.

According to investigators and legal documents, discussion of killing Afghan civilians began after the arrival of Staff Sergeant Calvin Gibbs at forward operating base Ramrod last November. Other soldiers told the army’s criminal investigation command that Gibbs boasted of the things he got away with while serving in Iraq and said how easy it would be to “toss a grenade at someone and kill them”.

One soldier said he believed Gibbs was “feeling out the platoon”.

Investigators said Gibbs, 25, hatched a plan with another soldier, Jeremy Morlock, 22, and other members of the unit to form a “kill team”. While on patrol over the following months they allegedly killed at least three Afghan civilians. According to the charge sheet, the first target was Gul Mudin, who was killed “by means of throwing a fragmentary grenade at him and shooting him with a rifle”, when the patrol entered the village of La Mohammed Kalay in January.

Morlock and another soldier, Andrew Holmes, were on guard at the edge of a poppy field when Mudin emerged and stopped on the other side of a wall from the soldiers. Gibbs allegedly handed Morlock a grenade who armed it and dropped it over the wall next to the Afghan and dived for cover. Holmes, 19, then allegedly fired over the wall.

Later in the day, Morlock is alleged to have told Holmes that the killing was for fun and threatened him if he told anyone.

The second victim, Marach Agha, was shot and killed the following month. Gibbs is alleged to have shot him and placed a Kalashnikov next to the body to justify the killing. In May Mullah Adadhdad was killed after being shot and attacked with a grenade.

The Army Times reported that a least one of the soldiers collected the fingers of the victims as souvenirs and that some of them posed for photographs with the bodies.

Five soldiers – Gibbs, Morlock, Holmes, Michael Wagnon and Adam Winfield – are accused of murder and aggravated assault among other charges. All of the soldiers have denied the charges. They face the death penalty or life in prison if convicted.

The killings came to light in May after the army began investigating a brutal assault on a soldier who told superiors that members of his unit were smoking hashish. The Army Times reported that members of the unit regularly smoked the drug on duty and sometimes stole it from civilians.

The soldier, who was straight out of basic training and has not been named, said he witnessed the smoking of hashish and drinking of smuggled alcohol but initially did not report it out of loyalty to his comrades. But when he returned from an assignment at an army headquarters and discovered soldiers using the shipping container in which he was billeted to smoke hashish he reported it.

Two days later members of his platoon, including Gibbs and Morlock, accused him of “snitching”, gave him a beating and told him to keep his mouth shut. The soldier reported the beating and threats to his officers and then told investigators what he knew of the “kill team”.

Following the arrest of the original five accused in June, seven other soldiers were charged last month with attempting to cover up the killings and violent assault on the soldier who reported the smoking of hashish. The charges will be considered by a military grand jury later this month which will decide if there is enough evidence for a court martial.

Army investigators say Morlock has admitted his involvement in the killings and given details about the role of others including Gibbs. But his lawyer, Michael Waddington, is seeking to have that confession suppressed because he says his client was interviewed while under the influence of prescription drugs taken for battlefield injuries and that he was also suffering from traumatic brain injury.

“Our position is that his statements were incoherent, and taken while he was under a cocktail of drugs that shouldn’t have been mixed,” Waddington told the Seattle Times.