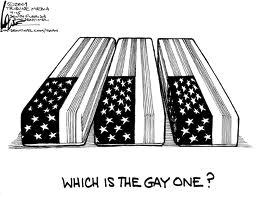 By Ernest A. Canning in the BradBlog

In her Sept. 9 decision [PDF] in Log Cabin Republicans vs. United States, U.S. District Court Judge Virginia A. Phillips, a 1995 Clinton appointee, determined that “Don’t Ask, Don’t Tell” (D.A.D.T) is unconstitutional as it violates First Amendment rights even within the more restrictive confines of military speech.

The court rejected the government’s argument that Log Cabin Republicans lacked standing to initiate the action, noting that at least one member of the group, John Nicholson, was discharged from the armed forces because of “Don’t Ask, Don’t Tell.” It expressly found that D.A.D.T “does not significantly further the government’s interest in military readiness or unit cohesion,” and directed plaintiff’s counsel to prepare a “Proposed Judgment, including a Permanent Injunction” by no later than Sept. 16.

Whether the Eric Holder Justice Department will appeal, despite President Obama’s pledge to seek a repeal of D.A.D.T., is an open question…

For the military, D.A.D.T. was a self-inflicted wound

In her decision, Judge Phillips not only pointed to official statistics revealing that some 13,023 members of the U.S. Armed forces had been discharged under D.A.D.T. between 1994 and 2009, but to the testimony of Dr. Lawrence Korb which reflected that D.A.D.T. produces an annual loss of approximately 5,000 via loss of recruiting and decisions not to re-enlist; that, for every service member discharged after ten years of service, six new members must be recruited to recover the lost level of experience.

According to the government’s own data, many of those discharged had education, training, or specialization in so-called ‘critical-skills’ including Arabic, Chinese, Farsi or Korean language fluency; military intelligence; counterterrorism; weapons development; and medicine.

The court noted that after 2001 even as the military was enforcing D.A.D.T., it began admitting convicted felons under “morals waivers.” It also pointed to the hypocrisy in the Department of Defense practice to delay discharge proceedings until after the service member completed an overseas combat mission and was redeployed in the U.S. — a delay that “undermined” the government’s claim that D.A.D.T. “served the interests of military readiness and unit cohesion.”

In a single paragraph, Judge Phillips summed up the scope of D.A.D.T.’s overreach.

Don’t Ask, Don’t Tell infringes on the fundamental rights of U.S. services members…The Act denies homosexuals serving in the Armed Forces the right to enjoy ‘intimate conduct’ in their personal relationships….the right to speak about their loved ones while serving their country in uniform; it punishes them with discharge for writing a personal letter…to a person of the same sex with whom they shared an intimate relationship before entering the military service…for including information in a personal communication from which an unauthorized reader might discern their homosexuality

It is important to avoid reading too much into this decision.

Judge Vaughn Walker’s Aug. 4, 2010 decision, which found California’s ban on same-sex marriage to be unconstitutional, was decided on Equal Protection grounds. In this case, Judge Phillips’ decision reflects that she previously dismissed an Equal Protection argument presented by the Log Cabin Republicans.

Thus, this case does not stand for the proposition that exclusion of homosexuals from military service is unconstitutional. It merely establishes that if homosexuals are to be permitted to serve, a statute which permits them to be discharged because the content of their speech reveals their homosexuality violates the First Amendment.

Ball is in Eric Holder’s Court

Given the President’s promise to seek a repeal of D.A.D.T., a challenge to this well-reasoned opinion would make no sense politically, economically or morally. But then, given the Department’s track record in such matters as defending the abhorrent state secrets doctrine and extraordinary rendition, nothing it did at this point with respect to D.A.D.T. would shock me.

Ernest A. Canning has been an active member of the California state bar since 1977. Mr. Canning has received both undergraduate and graduate degrees in political science as well as a juris doctor. He is also a Vietnam vet (4th Infantry, Central Highlands 1968).