Outside of the Shatila camp, who remembers? What American knows of the massacre? What government agency has investigated our involvement in it? What lives lost haunt the Israeli or American mind for the evil we have done against the innocent who died such ignominious deaths twenty eight years ago?

By William A. Cook via My Catbird Seat 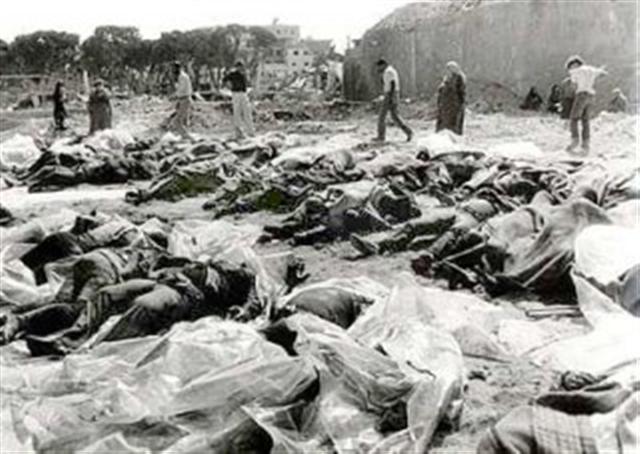 “O, that it were possible,

“The voice of the dead was a living voice to me.”

(Tennyson, “In the Valley of Cauteretz”)

Twenty eight years ago, a scene of unspeakable horror rocked the rubble strewn alleys of Sabra and Shatila refugee camps in Beirut as vengeance vied with naked lust in a massive display of human malice illuminated for the IDF (Israeli Defence Forces) overseers of this massacre with flares that provided “an unobstructed and panoramic view” for Israeli Defense Minister, Ariel Sharon and his Chief of Staff, Rafael Eitan, as they watched from the seven story Kuwaiti embassy providing logistical support for their Phalangist allies as they “massacred for 36 to 48 hours” the hapless Palestinians imprisoned in the camps.

“We were breathing death, inhaling the very putrescence of the bloated corpses around us. Jenkins immediately realized that the Israeli defence minister would have to bear some responsibility for this horror. “Sharon!’ he shouted. ‘That fucker Sharon! This is Deir Yassin all over again.’” (Fisk, Pity the Nation, 360). Outside of the Shatila camp, who remembers? What American knows of the massacre? What government agency has investigated our involvement in it? What lives lost haunt the Israeli or American mind for the evil we have done against the innocent who died such ignominious deaths twenty eight years ago?

Would that we could hold conference with the dead, to sense the absolute black fear that grabbed the mother’s heart as her executioner grabbed her skirt to shred it before unleashing his uncontrollable lust into her trembling body, to feel the depth of anguish that spread throughout her being in these last moments of her life, to fear with her the absolute despair she felt as her murderer laughed and mocked her before thrusting his knife into her child yet unborn in her womb. Would that we could share with those slaughtered during these days of anguish the pain and suffering they endured, hapless innocents offered by Sharon and his forces to their paid mercenaries as compensation for their loyalty to the invading armies of the Israeli nation. Would that we could comprehend from their recounting how a man might find it in his being, in the root cellar of his soul, to inflict such wanton barbarity on a fellow being. Would that we could understand how the chosen of G-d Almighty could unleash such hate on another people that they would allow a savage massacre of brothers and sisters to continue for three days yet proclaim to the world their innocence. Would that there might be some civilized, rational means of grasping how such pathological destruction of fellow humans could be justified that America’s support for a nation capable of such barbarity might also be justified.

Chris Hedges claims that “only the vanquished know war”; but this was not war, it was a massacre, yet these vanquished souls could tell us what vengeance is, what hate is, what sick minds are capable of inflicting on others if we only had time with them to learn. It is the destroyed that know and it is the destroyed we fear; to forget is our means to mental salvation, otherwise we are doomed to live in the hell of our memory that must see and know injustice exists and rules in this world inflicted by those who claim they are civilized but know in their souls they are but brutish beasts.

What can be said of Shatila twenty eight years later? It is, after all, but an incident in the horrors of sixty years stretching from the middle of the 20th century into the second decade of the 21st. It is an icon of American and Israeli horror, a burial of thousands destroyed savagely and forgotten while a symphony of hypocrisy extolling our virtues buries the reality. Those who died never existed, their sons and daughters never existed, their dreams and aspirations never existed, the fruit of their loins never blossomed to feel the heat of the sun, the coolness of the water, the fruit of the tree of life. We the indifferent cannot accept their existence nor recognize it lest we accept as well our guilt in their deaths. To return to Shatila is an act of retribution, an act that gives voice to the dead that suffered there, to accept responsibility for the horrors we allowed to happen there, to seek forgiveness of those who lost their lives there and cannot ever live those lives again nor see the sun rise or hear the baby’s cry or know the laughter of their children or weep at the loss of a mother or father … their voices have been silenced forever, yet they echo throughout the ages how vicious is the soul of humankind to remain silent and indifferent to their brothers and sisters in death.

William A. Cook is a professor of English at the University of La Verne in southern California and author of The Rape Of Palestine: Hope Destroyed, Justice Denied, Tracking Deception: Bush Mid-East Policy and The Chronicles Of Nefaria.  He is editor of MWCNEWS.  He can be reached at: [email protected]. www.drwilliamacook.com

If Americans Knew What Israel Is Doing!

Remembering the Madness and Mayhem of McCarthyism

BOOK: “The Plight of the Palestinians: a long history of destruction” Ed by William A Cook