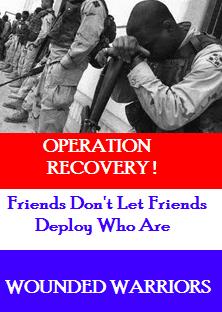 VT recently published two notices related to Iraq Veterans Against the War’s (IVAW’s) plan to kick off Operation Recovery their  campaign to defend GIs’ and veterans’ right to heal.

Thus far, in only about a week IVAW has managed to get 1,650 supporters to sign the Iraq Veterans Against the War’s Pledge to support Operation Recovery. 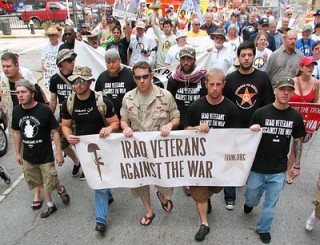 Just six days from now, Iraq Veterans Against the War (IVAW) will travel to Washington, DC to publicly announce Operation Recovery: Stop the Deployment of Traumatized Troops campaign.  On that day, October 7, this nation will enter its tenth year of war in Afghanistan — marking ten years of untold suffering for the Afghan people and silent pain for our troops.

With their Operation Recovery Campaign, IVAW will bring to light the private stories of trauma that an overwhelming number of veterans and GIs are coping with as they are sent again and again to continue these wars. And we will hold those responsible for deploying traumatized troops accountable.

If you have not already signed the pledge, you can do so now, by clicking here.

Mental Health problems among our military are overwhelming

Published medical studies in 2008 and 2010 estimate that 20-50% of all service members deployed to Iraq and/or Afghanistan have likely suffered from Post Traumatic Stress Disorder (PTSD).  In real numbers this means 350,000 to 900,000 are dealing with PTSD.

And a recent Army Times article states, “At least one in six service members is on some form of psychiatric drug. And many troops are taking more than one kind, mixing several pills in daily “cocktails” – for example, an antidepressant with an antipsychotic to prevent nightmares, plus an anti-epileptic to reduce headaches…”  It further cites that the Department of Defense spending on psychiatric drugs used by the active duty military has risen by 75% since 2001.

These numbers provide an outline of the picture of today’s American military and what it must do to continue the occupations in Iraq and Afghanistan indefinitely.  But next week in Washington, real veterans will be present to tell their personal stories and put a human face on the trauma they and thousands of others endure.

Knowing that 2,000 people like you are standing with them will mean a lot.

If you have already signed the Pledge, please spread the word to your friends, family, and colleagues.

We can’t do this without you.  Make a gift today to support the important work of this campaign.