Each year since 1984 the 3rd weekend in September is dedicated in Europe in 49 countries as Heritage Days ( Les journées de la Patrimone). People get to visit buildings  they can not visit any other time of the year. Examples in Paris include the Palais de l’Elysée ( home of the President) and other government building , hospitals, schools, city halls, factories, private art collections  and others.  Tour guides offer tours and of course, there are long lines to visit many places.  Admission to all places is free.

This year I decided to visit the Cité Internationale Universitaire de Paris  because I attended some cultural events there but wanted to see the interiors. Located on 40 hectares near a famous park in Paris, Parc Monceau, Cité International was founded in the 1920s to provide housing and cultural facilities. Forty international houses “Maisons” houses representing countries, geographic areas  or even continents such as Asia hour  10,000 residents a year which  include students, professors, artists and athletes from over 140 countries.  Foundation des Etats- Unis, the building from USA was built in 1930 and has 267 rooms, 8 workshops and the interior is art deco style.

This year the following buildings were open 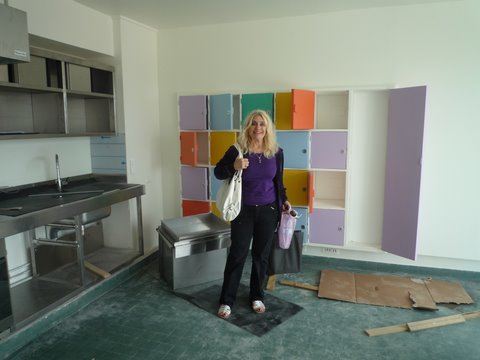 There are many conveniences at the Cité International such as a bank, post office, cafeteria on the premises  and easy access to the RER  ( public transportation like the subway) and tramways.

There are many opportunities for international cultural exchange.
Each year there are 1000 cultural events including theatre performances, choirs, art exhibits.  A modern up to date language lab on premises offers students the opportunity to practice many languages and there are conversation groups in French, English, Spanish and other languages.

Funding for the Cité Internationale comes primarily from corporations, private companies and foundations.  Students pay 450 to 500 euros per month for rooms. There are some studio apartments for researchers and two bedroom apartments.  Each house accommodates students primarily from their country or region but includes others so that there will be some good cultural exchanges.

For the first time since since 1969, a new house was authorized. on September 29, 2010. It is La Maison de l”Ile de France and it will be totally positive energy which means energy efficiently.

My first visit was to la Maison de la Norvège ( Norway) where I had a tour in course by two architects Jean-Marc Deram and Olivier Tauvel who explained their work. The ground floor had a large room for welcoming visitors and relaxing and a room for concerts but the most interesting were the other floors  each which is painted in different colors.  We visited the rooms which were very bright and cheerful, the communal kitchen where students can prepare meals and even the showers.  The rooms are designed for high speed internet access and private telephone lines.  The architects explained that unlike many other buildings there wasn’t any room for showers in the rooms. I wanted to know if the building was accessible for limited mobility or physically challenged people. They told me only the ground floor. I liked the building and felt students would feel at home there.  Actually it is still under renovation.

The most interesting part of my visit was to La Fondation Biermans-LaPôtre which is one of the oldest houses in the Cite built in 1924 and inaugurated in 1927 by Prince Leopold who became Leopold III. Jean-Hubert Biermans and his wife Bertha La Pôtre gave 15 million French francs to construct the house.  It was to house Belgian students on the first floor and Luxembourgeois students on the second floor.

The interior is well preserved.   It had old fashioned tile in the reading room with large old fashioned chairs from the 1930s which are still used as evidenced by many international newspapers.  There are also two television rooms with international satellite television to help students perfect languages.  Such facilities really do motivate students  and many have succeeded in careers in the areas of sciences, economics, business, and artistic fields.

The house has a beautiful art decor style ballroom. It has beautiful frescoes picturing different cities in Belgium.  I was impressed and the guide explained that the ceiling has a few stains but they can not be repaired – too expensive.

The house has 201 roooms and 18 studios all with shows, new system of steam heat from a collective source, individual telephone lines and high speed internet.

Other houses I visited included the Maison de Maroc which had typical Moroccan decor including beautiful ceilings  which  I visited with the guide who took us to the Foundation Biermans-La Pôtre. He was from Tunisia and  the Maison de la Suisse with a guide from Argentina.  I enjoyed the tour guides’ explanations. They enjoyed living at the Cite and told me it helped to be living with other international students.

Students living  at the Cite can benefit not only from all the cultural activities that Paris has to offer but also from the cultural association with other students who live there. I spoke to many students when I was walking around the campus and they all liked living there.   I think that this unique housing complex is a great opportunity for students.