Home Government The Pledge of Allegiance: A Wish List at Best

The Pledge of Allegiance: A Wish List at Best 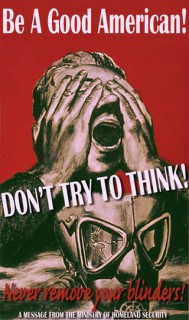 Many conservatives, including syndicated talk show host, Sean Hannity, have advocated that reciting “The Pledge of Allegiance” be made mandatory for children in the nation’s schools.

As a middle-class African American male – in fact, as a human being of good conscience – I would take great exception with such a move. The Pledge of Allegiance represents the worst kind of hypocrisy, and it serves no useful purpose other than to brainwash the nation’s children.

One would think that as a conservative Mr. Hannity would recognize that the very essence of freedom is the freedom of parents to raise their children according to the philosophy that they see fit. Therefore, forcing a pledge down the collective throat of America’s children constitutes an unconscionable intrusion by government on a family’s rights. It would be un-American by definition.

In addition, it’s a form of brainwashing. What other motive can we have for forcing a children to recite a pledge that they don’t even understand? When I was a kid coming up during the height of the civil rights struggle, I was forced to pledge my allegiance to a nation that frowned upon everything I represented, and was dead set on thwarting anything that I ever hoped to become.

At the same time, so-called “patriotic Americans” – while enthusiastically insisting that we recite The Pledge – simultaneously lynched African Americans, bombed black children in church, and formed angry mobs to show up and jeer black children attempting nothing more than to go to the school of their choice. And shortly before that, these same “patriotic Americans” forced Black WWII heroes returning from Europe to give up their seats to German prisoners of war. Yet, there I was, standing there reciting the Pledge of Allegiance – “to the republic, and for which it stands” – every morning. Even as a child, if I had understood the meaning of the words that I was mindlessly embedding into my brain, I would have refused to recite them – regardless to the consequences.

And beyond the pledge being morally disingenuous and a monument to the worst kind of hypocrisy, the entire text is, literally, a lie: “. . . One nation under God.” In light of what I’ve just described, what is that supposed to mean? “Indivisible.” The Civil War demonstrates that’s a lie. “With liberty and justice for all.” I won’t even waste the ink to address that issue. So again, other than brainwashing, what other motive could we possibly have for requiring our children to start off every morning with a lie?

Now, I realize that I sound like a wild-eyed radical, but if I do, it’s only because I have a very low threshold for bullshit. I love this country, but I love truth more. I’m eclectic in my views. I believe in clear, unadulterated thought, and addressing every issue on its own merit. As a result, sometimes I agree with liberals, and at other times I agree with conservatives. That doesn’t always make me very popular, but I’m more than happy to forsake popularity in return for moral and intellectual clarity. I was taught that’s what it means to be an American. Maybe I’m naive, but I took that lesson seriously.

I’m in pursuit of truth, not an agenda. For that reason I stand with conservatives on issues like set-asides, because moral and intellectual consistency dictates that if you’re against discrimination, you must be against all discrimination. Yet, I stand with liberals in being against vouchers. The mere fact that conservatives want to create an “entitlement program” immediately sends up a red flag for me. Creating schools run by corporations is the fastest way that I can think of to create young fascists for America who are running around speaking in fundamentalist tongue. A voucher system would also lead to a two-tier society. What will happen to low and middle-class children when private schools raised tuition beyond their parents’ reach and the public school system have been destroyed? I’ll tell you what will happened – the parents would be chained to corporations to work for crumbs just so their children could learn to read and write.

Proponents of a mandatory pledge contend that our children should be taught to love and respect our country. It is my position that too much nationalism and not enough principle is what cause the kind of animosity toward this country that led to 9/11. We need to teach our children to embrace high ethical standards and principles, then if the leaders of our country follow suit, the nation will engender the uncoerced love and respect of its citizens and the world.

Thus, the Pledge of Allegiance should not be a pledge at all. It should be presented as a goal. Then instead of lying about who and what we are, it would encourage us to focus our energies on what we hope to become. Maybe then we’ll create the kind of nation where brainwashing our children for their allegiance won’t be necessary.