Americans Unable to Compete in a Democracy

Recently, I watched a trailer for an upcoming documentary called “Gerrymandering”.   Making its world premiere at the Tribeca Film Festival this year, this bi-partisan sharp documentary convincingly argues that the shady process of gerrymandering (politicians carving up districts in order to maintain power) makes a mockery of democracy—with confirmation from both sides of the political divide. Somehow, out of all that depressing news comes an exceptionally entertaining film and gives us a wake-up call.

This movie exposes the hidden history of our country’s redistricting wars, mapping battles that take place out of public scrutiny but that shape the electoral landscape of American politics for decades at a time, posing a threat not just to democrats and republicans, but democracy as a whole.

And so it got me thinking. What’s wrong with our election processes?

In a new world with modern communications, why do we still have all of these pathetic antiquated systems?  And what the heck is an Electoral College?  Why do we use it?  Why is America still living in the past and not using our technology to be leaders in the 21st century?

I mean from this ridiculous gerrymandering thing to the antiquated Electoral College process, why must we Americans who basically invented the friggin’ internet have to put up with all of this garbage?  It’s very strange.

With no professors and very few cheerleaders, the Electoral College is one of the most obscure colleges in America. But it has complete control over who leads the most powerful nation in the world. It’s the Electoral College, which reemerged from obscurity to play a pivotal role in the selection of George W. Bush, 43rd President. 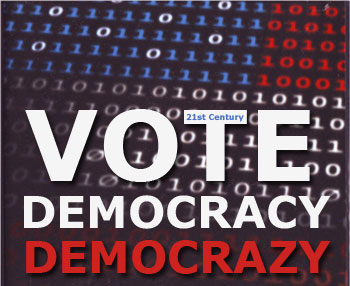 Having an 1800’s pony-express era system when TV’s American Idol is voting instantly for its winners seems very strange as if we’re democratically living in the 1800s while the rest of the world is competing in this new century.  The Electoral College, in this age, makes no cents and is insulting to every American who votes.

You know this is century-old debate over whether the Electoral College should go to the scrap heap or not is a very strong reminder that we’ve lost our ability to compete in the 21st Century and that we truly need a paradigm shift in thinking if we are going to be a world leader once again.

The world is NOT flat and the earth is NOT the center of the universe.   We’ve finally figured these things out so why have a rickety institution that has thrice made a popular-vote loser the President? Unabashedly elitist and wretchedly old skool, the Electoral College was created by the founding fathers in 1787 as a counterbalance against too much democracy and to protect states from encroaching federal power.

But that was over 200 years ago when they used whale oil to light up their night lamps and thought the moon was made of cheese.  Come on people!

Here’s how the Electoral College supposedly works, or as I say, dysfunctions;

Each state gets a number of electoral votes equal to its total representation in the House and Senate. So a state like California, with 52 House members and 2 senators, gets 54 electoral votes. The problem? Small- and midsize states have a louder voice in selecting a President. For instance, the 22 smallest states together have less than California’s population but nearly twice as many electoral votes. To win, a candidate must take 270 of the 538 electoral votes.

Indeed, there have been periodic crusades to abolish the Electoral College. But they failed to win much support from many states.  They say that if the Electoral College were abolished, candidates would have little incentive to visit less populated states.  They say Nominees would concentrate on big cities and population states, mainly in the Northeast and California. Their time would be better spent in places like New York City. As a result, the college keeps us from having a regional Presidency.

But that’s B.S. in the modern world.  With TV, Internet, Satellites, etc… don’t pull that silly card.  Come’ on!  This is no country for old men.  Put away those 6 shooters, round up the cows, and come home with me here.  Get with it people!

Yeah, I know, keeping the status quo has it backers from powerful interests such as farmers and gun-rights groups. Because of their concentration in such less populated, rural places, it magnifies their power in swing states like Iowa and Tennessee.  But we’re talking democracy for America, not just for Iowa!

What’s more, both parties back the Electoral College.  Why?  Because of the winner-take-all-aspect of almost every state’s electoral votes, third parties don’t stand a chance.  As some of you will remember, back in 1992, Ross Perot received 19% of the popular vote but did not get a single electoral vote.   That’s rank!  How does this encourage democracy?   Discouraging competition seems Un-American doesn’t it?

To repeal the Electoral College system would require a constitutional amendment passed.  So maybe I am dreaming of a new America that lives in the 21st century while the old blue and brown suits/skirts in Washington continue to hold on to the 20th century past and so goes the rub.

But in today’s modern world of Blackberry’s, iPhones with men like Steve Jobs and innovators like that guy from Facebook and Simon Fuller from American Idol, why can’t we just simply vote direct with the winner take all.  Heck, make Simon Fuller head of voting and he’ll fix this whole darn thing in one episode!   Yeah, maybe we can get Steve Tyler, Jennifer Lopez, and Randy Jackson to host election night.  Seems to me that would have more integrity then this garbage we have to endure.

Voting direct for our President would be pure democracy instead of this democrazy!  Period!  Ya Think?