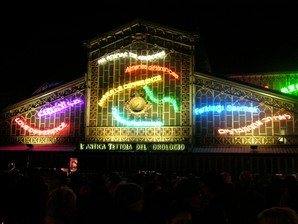 Paris, known as the city of light, celebrated Nuit Blanche ( an all nighter) 2010 on Saturday, October 2nd for the 9th year. This annual event gives tourists and residents an opportunity to visit events and places free, many open from 7 p.m. to 7a.m., that they could not visit other times and many others that are open only for this event.  Parisian suburbs also celebrated the event. In other cities around the world, there are also “all nighters.”

The idea is for people to get out and have fun while enjoying cultural events, dining at restaurants, drinking in cafés and seeing buildings with lights mounted on them or in them for this event. Two subway lines were open all night. Line 14 had a unique announcement system all night announcing the stations first in Japanese and then in French.

Also La Nuit Blanche provided opportunities for new artists to show their concepts such as lighting on buildings and video productions.  Concerts by musicians from different countries and art exhibitions in galleries gave unique opportunities for culture vultures experience new concepts.  Many museums and small theatres were open.   The City of Paris published a brochure listing all the events, the locations complete with maps a and gave it away free.

Even the association of bakers and pastry makers made bread and pastry for visitors to taste all night from 7 p.m. to 7 a.m.   An exhibit showed the history of baking. Over 40 artists were invited to display their works ( art, music and video).

The Musée d’Art d’Histoire du Judaisme featured a play called “Le Psy, L’Artist et Le Cusuinier, 2010 by Pierre Bismuth.   It was different. In one corner an artist was seated on a coach for a psychological consultation while across the room in another corner a chef prepared Jewish dishes in Sefardic tradition.  The psychologist and the artist commented about the chef. The projection went from one corner to another.

A political statement was made by an artist, Miheologelo Pistolettoan Italian had an original project. He installed 20 neon  lights in different colors. on the Hotel de Ville ( City Hall in the 1st arrondissement)  “Aimer les differences” ( To like our differences)  in several languages. It was very impressive.

Also green lights were place in an arcade by L’Hopital Dieu a famous Parisian hosptal.

Notre Dame Cathedral had lights on inside instead of outside.

I took the opportunity to visit Hotel de Ville and see the neon lights. Then I saw there were people entering Eglise Sainte Mary.  There people dressed with strange electronic tubes played electronic music in a church where classical musical concerts are played free on the week-ends.  From there I went to Theatre de la Ville where I saw a video production in English

“Four Seasons” about a man and a women arguing and  with violent scenes of fire.  It depicted the troubles in human relationships.

Across the street, I enjoyed seeing the Theatre de Chalet with its ornate interior.  The video was “Body Double” by Brice Dell Speiger about transvestites.  He takes scenes from the film “Eyes Wide Shut” by Stanley Kubrick and shows us the difficulties transvestites have particularly due to drug problems.  The audience was attentive and I didn’t know if they liked the film or were just tired from walking around. The video itself was absurd!

At Trocadero by the Eiffel Tower flags from different countries were flying but with their colors removed and instead black and gray to give a message for peace and to alert people of the effects of globalization.

An exhibition at the Gallieries nationales du Grande Palaisby  the exhibit  by Claude Monet attracted many visitors and there were long waiting lines.

Other years, other museums were open but this year was the first time for the lights on the buildings and there were so many activities.

It was fun to celebrate “ Nuit Blanche 2010” even though the subway was jammed and there were long lines to get into several museums and events. People were very happy to be out on a brisk, clear night enjoying Paris.  In these hard financial times, people liked to be invited free by the city of Paris to attend different events.   For the first time lights were installed on several buildings making Paris  lit up for La Nuit Blanche.