Mr Obama’s most pressing concern is shoring up his Democratic Party’s vote at the congressional mid-term elections in early November. 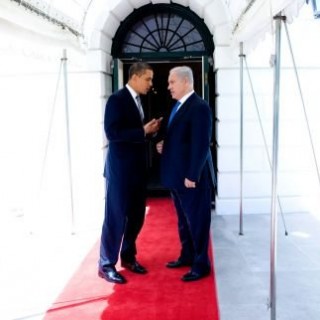 A ghost haunted the meeting of the Arab League in Libya at the weekend, as its foreign ministers decided to give a little more time to the peace talks between Israel and the Palestinians.

That ghost was the Camp David talks of summer 2000, when US President Bill Clinton publicly held Yasser Arafat, the then-Palestinian leader, responsible for the breakdown of the negotiations, despite an earlier promise to blame neither side if they failed.

Mr Clinton’s finger-pointing breathed life into the accusation from Ehud Barak, Israel’s prime minister, that there was “no Palestinian partner for peace”; brought about the collapse of the Israeli peace movement, and ultimately sanctioned the decision of Mr Barak’s successor, Ariel Sharon, to invade the Palestinian-controlled areas of the West Bank.

A decade later, the Arab League ministers did not want to expose Mahmoud Abbas, the Palestinian president, to a similar charge from Barack Obama.

They therefore played the safest hand possible: they offered Washington another month’s breathing space to persuade Israel to renew a freeze on settlement building, while also supporting Mr Abbas’s decision to break off direct talks until the freeze was back in place.

The decision’s dual purpose was to throw the spotlight squarely back on Israel as the recalcitrant party, and allow the White House to continue to pretend the talks are still on track.

The league’s new deadline was chosen precisely to appease Washington. Mr Obama’s most pressing concern is shoring up his Democratic Party’s vote at the congressional mid-term elections in early November. Neither the Israelis nor the Palestinians want to be seen walking away from the president’s peace initiative before then.

Instead, the Palestinians and Israelis concentrated on the blame game, thereby highlighting the fact that both think the talks are doomed. The Camp David talks lasted two weeks before collapsing; these negotiations have been on life support since they began more than a month ago.

“The Israeli government was given the choice between peace and settlements, and it has chosen settlements,” the chief Palestinian negotiator, Saeb Erekat, said on 8 October.

Binyamin Netanyahu, the Israeli prime minister, spun events the other way, arguing implausibly that the Palestinians should have engaged more decisively in talks during the 10-month partial freeze on settlement growth, which expired two weeks ago. “The questions need to be directed to the Palestinians: why are you abandoning the talks?” Mr Netanyhau said on 7 October.

Rather than investing wasted energy in doomed talks, the two sides appear to be adopting the same alternative strategy: cutting a deal directly with Washington that circumvents the other party.

At the weekend it was reported that Mr Abbas had told Arab leaders he was considering asking the US president to recognize a unilaterally declared Palestinian state in the whole of the West Bank.

Mr Erekat told Reuters another option might be a request for a United Nations Security Council resolution calling on member states to “recognize the state of Palestine on the 1967 borders”.

In the past, Washington has greeted such Palestinian proposals unenthusiastically. But threats by Mr Abbas to resign if the Israeli settlement freeze is not renewed – leaving no obvious successor – are intended to add to the pressure on the White House.

Mr Netanyahu, meanwhile, is reported to be working on a counter-offensive he hopes will win Washington’s approval. Michael Oren, the Israeli ambassador to the United States, officially confirmed to the Washington Post last week that the Obama administration had offered Israel a range of generous diplomatic, security and financial “incentives” to secure a few months’ extension of the partial moratorium on settlement building.

Mr Netanyahu is reported to have turned down the offer but only, it appears, because he believes he can win a more valuable concession. His real aim, the Israeli media reported last week, is to persuade the White House to reaffirm a promise made in a 2004 letter from Mr Obama’s predecessor, George W. Bush, that Israel will not be required to withdraw to the pre-1967 borders in a peace deal.

Israeli officials understood that to mean the Americans would approve the annexation of the main settlements to Israel, allowing most of the half-million settlers to remain in place. The Obama administration has until now denied the pledge was ever made.

In exchange for Mr Obama’s endorsement of the promise, Mr Netanyahu might be willing to reimpose a short-term settlement freeze, arguing to his ministers that soon it would no longer apply to most of the settlements.

Either Washington would be committed to Israel’s key demands in the talks or “US credibility” would be damaged. “Instead of Netanyahu being the dissenter, Obama will be the dissenter,” he wrote.

Mr Netanyahu, however, is stuck unless he can overcome opposition to a deal on a settlement freeze within his own cabinet, led by Avigdor Lieberman, the far-right foreign minister.

According to senior officials in the Labour Party, ostensibly the most dovish of Mr Netanyahu’s coalition partners, that explains the timing of his move to placate Mr Lieberman by backing a loyalty oath for non-Jews applying for citizenship.

Jonathan Cook is a writer and journalist based in Nazareth, Israel. His latest books are “Israel and the Clash of Civilisations: Iraq, Iran and the Plan to Remake the Middle East” and “Disappearing Palestine: Israel’s Experiments in Human Despair“.