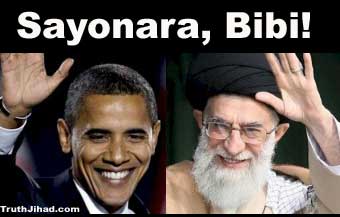 US President Barack Obama has been sending secret letters to Iran’s Supreme Leader Ayatollah Ali Hosseini Khamenei. But the full text of these letters has never before been revealed.

But now, in his latest stunning revelation, Edward Snowden has hacked into White House computers and acquired a copy of Obama’s most recent letter to Tehran. In exchange for a fistful of US toilet paper dollars, which nobody in Moscow seems to realize are not worth the paper they’re printed on, Snowden agreed to provideTruthJihad.com with exclusive access to the letter. In the interest of world peace, intercultural understanding, cute kitties, and other warm fuzzy things, we are reprinting the full text below.

Seasons greetings from your ol’ pal Barry. May I call you Ali? Love that moniker! As a kid I had a crush on Ali McGraw. Did you ever see her in Love Story or Goodbye Columbus? Yes, I know she’s Jewish, but hey, we’re not anti-Semites, are we? Just because you Iranians are always pointing out that Hollywood is completely dominated by Jewish Zionists doesn’t mean we can’t admit that some of those Jewish girls are, quite frankly, hotter than an Auschwitz oven. Speaking of which, you do realize there were ovens in Auschwitz, don’t you? I understand you guys had a conference a few years ago…but we’d better not go there, since if I say the wrong thing Angela will have me arrested next time I’m in Berlin.

Ahem…anyway, I’m writing to congratulate you on that new suicide drone. Seems like ages since I’ve been trying to tell my Republican friends that deep down inside, you Iranians want to be just like us. Well, here’s proof. We kill people with drones, now you’re following in our footsteps. Next thing you know you’ll have a McDonalds and Wal-Mart on every corner and you’ll all be working at minimum wage service jobs…maybe even taking up American-style democracy, with elections on sale to the highest bidder. Could I interest you in some black box electronic voting machines?

And speaking of your new suicide drone, I was wondering if you could do me a little favor and take out Bibi Netanyahu? You and I both know he’s maybe the world’s most dangerous terrorist. (I would show you the top secret VT document proving Bibi personally smuggled a WTC-demolition nuke into New York inside his diplomatic-immunity-protected briefcase, but then we’d have to kill you.)

You’re probably wondering why I don’t just take him out myself. Believe me, I’d love to. But if I did that, Abe Foxman would have a hissy fit…maybe even a heart attack. And what would we do with ourselves if we didn’t have Abe to kick around any more?

Gotta go! Michael, I mean Michelle, needs me to adjust her shoulder pads. Please do let me know if that oil price collapse Kerry engineered with the Saudis is a problem – I’d be happy to send Soros over there to help you jack up your currency, all you have to do is swear on a Qur’an that you’ll promote LGBT rights and beam pornography at your citizens 24/7/365 and let Rothschild have your central bank. Oh yes, and do a couple of little “structural adjustments,” like I’m off to do with Michelle right now.