Today would have been the young man’s 19th birthday.

(SALEM, Ore.) – Furkan Doğan shot the Israeli military first, then they shot back, and ultimately executed him on the deck of the Gaza Freedom Flotilla ‘Mavi Marmara’ last May. The problem, is that Furkan was only using a video camera.

Furkan Dorgan’s family, after hearing the news of his murder:

The Israeli commandos who “bravely” stormed this humanitarian aid vessel with unarmed peace activists, used 9mm pistols and sub machine guns to shoot back. The end result was a tragedy and not just for the Turks, but also for the Yanks.

As Ralph G. Loeffler in Kayseri, Turkey wrote two days ago in his article, Remembering Furkan Doğan, “Furkan was filming the Israeli assault when an Israeli commando fired his first shot pointblank hitting Furkan squarely in the face. Four more shots were fired into Furkan leaving him dead and unrecognizable.”

Ken O’Keefe, who is a former U.S. Marine and a Salem-News.com writer, personally disarmed two of the three Israeli commandos who raided their ship at 3:40 a.m. It is not clear if the soldiers Ken subdued and captured were the specific individuals who killed Furkan and eight others, shooting and injuring dozens of other unarmed activists at the same time; but it is just as likely they were.

“When we got them below these brave Israeli commandos turned into a bunch of scared little children. They thought we were going to do the same thing to them that they did to us,” O’Keefe said.

But as his captain and shipmates had said from the start to international media, they were not going to Gaza with a goal of hurting or killing anyone. Their goal was to break the blockade, or ‘siege’ that Israel maintains around Gaza, choking its 1.5 million residents off from aid and help. They were enroute to deliver supplies that ranged from medicine and food, to wheelchairs and construction supplies.

These items are badly needed in Gaza because of Israel’s frequent attacks on this historic place; the last stronghold of Palestinian resistance to Israeli oppression and occupation.

When the soldiers stormed the Mavi Marmara, they opened fire with deadly rounds from boats that chased the ship. As the helicopters hovered overhead depositing Israeli Defence Force soldiers, snipers secure in the aircraft indiscriminately killed activists with a scope. It was a real, profound act of cowardice. Like Ken, I am a former U.S. Marine. Honorable military groups do not attack unarmed civilians, at least by accepted policy, but Israel does.

According to the United Nations General Assembly Human Rights Council’s Report of the international fact-finding mission to investigate violations of international law, including international humanitarian and human rights law, resulting from the Israeli attacks on the flotilla of ships carrying humanitarian assistance*

Deaths occurring on the top deck (roof) Furkan Dogan , a 19-year-old with dual Turkish and United States citizenship, was on the central area of the top deck filming with a small video camera when he was first hit with live fire. It appears that he was lying on the deck in a conscious, or semi-conscious, state for some time. In total Furkan received five bullet wounds, to the face, head, back thorax, left leg and foot. All of the entry wounds were on the back of his body, except for the face wound which entered to the right of his nose. According to forensic analysis, tattooing around the wound in his face indicates that the shot was delivered at point blank range. Furthermore, the trajectory of the wound, from bottom to top, together with a vital abrasion to the left shoulder that could be consistent with the bullet exit point, is compatible with the shot being received while he was lying on the ground on his back. The other wounds were not the result of firing in contact, near contact or close range, but it is not otherwise possible to determine the exact firing range. The wounds to the leg and foot were most likely received in a standing position.  -UN Report

As Ralph G. Loeffler shares in his report, Furkan Doğan is as American as one can be. He was born in the Albany-Troy area of New York, but had gone back to live in his family’s hometown of Kayseri, Turkey.

Loeffler wrote: “His family knew the names of the eight Turkish nationals who had been killed on the Mavi Marmara but one casualty had not been immediately identified. In their normal pattern of lies and misinformation the Israelis had not identified Furkan because he was an American. They waited until the initial impact of their murderous attack on innocent, defenseless humanitarians subsided a bit before confirming the ninth victim was Furkan.”

Sadly,, when Furkan’s father, Ahmet Doğan, an accounting professor, went to meet the Mavi Marmara’s survivors and casualties- he did not yet know that his son had been murdered. The Israeli government directed him to the morgue to identify his son’s disfigured remains. I agree wholeheartedly with Loeffler’s sentiment. “Surely such a day defies description.”

Reaction worldwide to this murder of nine innocent people was sharp; the incident brought harsh criticism of Israel from the offset. But the more recent announcement from the UN Human Rights Commission, cited above, that Israel specifically violated international law and executed several of the activists, is increasing pressure on the Jewish state and its seemingly endless list of over the top military reactions toward the Palestinian people.

On 18 September 2010, the Viva Palestina 5 Convoy was launched. Loeffler says it arrived in Kayseri late on 29 September. They spent the night on a mountain overlooking the town.

“We had come to Kaseyri for the sole purpose of visiting Furkan’s gravesite and extending our condolences to his family. 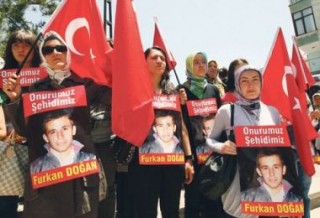 The following morning we were told that our convoy would be passing by the high school from which Furkan had graduated and that students from the school would be waiting for us. As we began our slow journey down the twisting mountain road the convoy took on the air of a funeral procession. Suddenly, there they were. The students lined both sides of the road standing for who knows how long. Each one sadly, silently, proudly held up Furkan’s picture as the convoy rolled by.”

He explains how beautiful, moving words were spoken at the gravesite. The group then met with Furkan’s family at the recently built community center named in Furkan’s honor.

“The grandfather and uncle bore their grief perhaps with the acceptance of mortality that comes with age. But the older brother’s grief was palpable. Deep, dark lines were etched under his eyes and he seemed detached from his surroundings. The despair evident on his face made a statement greater than words could ever do.”

Such is the handiwork and motivation of the Israeli government. There was a time when they were the culture under threat. Today they have fully turned the tables. Ralph G. Loeffler says any country should be proud to have a promising young man such as Furkan as one of its own.

“Intelligent and mature beyond his years Furkan had already dedicated his life to the struggle for Palestinian justice. Such a course bears no import with the US Congress, which allows for the US bankrolling of the occupation. And the Israeli thug who gunned down Furkan is no more responsible for murdering him than Furkan’s own country which paid for the bullets.”

Today is Furkan’s birthday; he isn’t here to celebrate it, but it is nonetheless. I greatly appreciate this poem written by Funda Cetin.

Today in 1991 a baby was born in Troy, New York.
With his blonde hair, lovely, pure face and nice black eyes, he was a very cute baby.
He was the youngest member of Dogan family and was the source of happiness and joy.
They called him ‘Furkan’ meaning ‘distinguishing reality from superstition’.
As he was born there, he was an US citizen.

He was two when his family had gone back to live in their hometown of Kayseri, Turkey.
Furkan completed his education in Kayseri.
He was a very smart and hardworking student.
He was loved and respected by all his friends…
He had always a smile on his lovely face. He would care his clothing and tidiness.He was a very generous teen.
He would love participating in charity organizations.
Last time, he and other voluteer student in his school gathered considerable amount of money for Gaza.
He would spend his pocket money for charity organizations.

Furkan had a passion… to be a doctor.
As he loved helping people, he wanted to be ‘cure’ for sufferers.In the exams he got a successful level.
His dream of becoming a doctor would become true…
But… but, there were some ‘killers’ in the Mediterranean Waters on May 31.
They killed ‘dreams, hopes of an idealistic young man’ – ruthlessly.

Ralph G. Loeffler is an activist with the International Action Center in New York City.

Tim King is a former U.S. Marine with twenty years of experience on the west coast as a television news producer, photojournalist, reporter and assignment editor. In addition to his role as a war correspondent, this Los Angeles native serves as Salem-News.com’s Executive News Editor. You can send Tim an email at this address: [email protected]