By Air Commodore (R ) Khalid Iqbal While in India, President Obama is poised to walk a tight rope. Pre-trip speculations in India, centred on unrealistic “deliverables” like agreements on export controls, resolution of the nuclear liability problem, military supply 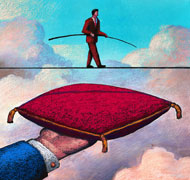 agreements, cooperation in the domain of upper space, American nod for a permanent seat in UNSC etc.

Actually Obama does not have a “deliverable” of the size and magnitude of what his predecessors had. There will be a few run of the mill agreements on security and economic cooperation, including on military sales like C17 military transport aircraft. There could be symbolic touching of some other domains as well. Gap between the expectations and the reality of this summit is likely to be enormous which could be made-up by louder oratory about renewed commitment of close cooperation on high sounding ideals, mostly the intangibles.

Symbolically, India is all set to generate pressure waves against Pakistan. Making 26/11 commemoration at Taj Hotel as the starting event of Obama’s visit was squarely aimed at that. The issue of David Headley has recently been stirred up for similar purpose. This dubious RAW-cum-FBI agent is known for maligning Pakistani institutions, on behest of its pay masters, especially in connection with the unfortunate Mumbai incident of 26/11.

This visit is taking place when US-India relations are in a ‘recession’. India feels sore that even after obliging America through multi-billion dollar investment in Afghanistan; America is not sponsoring India for a ‘heir apparent’ status in post America Afghanistan. The United States is unlikely to sponsor the kind of military role that India envisages to have. Likewise, Americans are perturbed that instead of reciprocating out-of-the way favour of ‘Agreement 123’, India has literally closed the door for American firms by inserting a clause in its domestic liabilities statute  that binds the suppliers for compensation in case of an accident. ‘Civil Liability for the Nuclear Damages Bill, 2010,’ was envisaged to be the last stage towards completion of the dubious Civilian Nuclear deal, but now it effectively undermines the very (ulterior) motives for which America concluded the dubious ‘Agreement 123’.

Indian legislation is inconsistent with existing international standards governing nuclear commerce, which place liability exclusively with the operator of a nuclear reactor while immunizing its suppliers.  The Indian law, however, renders both suppliers and operators liable for eighty years after the construction of the reactor. India’s post haste joining of convention on ‘Supplementary Compensation for Nuclear Damage’ is not likely to divert attention from an anti- America domestic law. Kashmir issue is another point of disagreement.

The intifada that exploded this summer in Kashmir can not be ignored by the visiting President. During the recent months there have been numerous incidents of brutal use of force by the Indian security forces in IHK. Human rights violations in IHK have been brought to light by many international agencies of repute. Prior to reverting to the status of ‘Candidate Obama’, for re-election, President Obama is keen to see tangible progress towards settlement of Kashmir dispute. His credibility is at stake. If Indian’s do not fall inline, Obama will have little option but to have direct contact with the parties representing political resistance against the Indian occupation of Kashmir, say on the pattern of Presidential liaisons with Dalai Lama. President Obama’s vision of nuclear weapons free world is held hostage to intricately (read mischievously) intertwined Indian policies of nuclear security and power generation.

India has already piled up 1300 tons of reactor grade fissile material churned out by its nuclear power reactors over the previous years. One of the Indian nuclear explosions of 1998 was done by using reactor grade Plutonium. It is this conundrum that has compelled Pakistan to block the negotiations on Fissile Material Treaty (FMT), at the Conference of Disarmament. Despite pressuring Pakistan to fall in line on FMT issue, Americans know it well that spoiler is someone else. Pakistan’s principal worry is the perpetually snowballing disparity with the Indian stockpile of fissile material which threatens the strategic stability in the region. Current impasse on FMT emanates from India’s nuclear energy policy rather than its nuclear strategy. Likewise, India’s ambitious plans for Fast Breeder Reactor technology have serious implications for the nuclear stability in the region. Therefore, any progress on the FMT would only be possible if India is willing to separate the domains of nuclear energy from that of nuclear security.

China is likely to figure extensively in the private talks. Since cold war days, India has been on American retainer-ship as a cheap deterrent against China. Now China has outgrown the capacity of this deterrence. America views China as a cornerstone of Asian stability; this is nightmarish for Indian strategists who continue to live in yesteryears. With Japan, China and Russia firm and fit, Indian dream of regional leadership is in disarray. There is not much that Obama could do to alter Asia’s natural power equilibrium. The United States is betting the future of its role in Asia on the development of broad-based diverse power structures, of which India is only a small component.

Recently, India’s multiple weaknesses have been exposed. Management of ‘Common Wealth Games’ has demonstrated that India still has the capacities of a typical developing state. While reporting that India is home of the largest population of hungry in the world, the ‘Global Hunger Index 2010’ has placed India in the pit of shame. India was ranked 67th among 84 hungry countries of the world. An international report submitted by ‘Save the Children Fund’ on the eve of recent UN Summit on Millennium Development Goals shows that over 5,000 children succumb to malnutrition every day; India has once again topped the global ranking. United Nations’ 2010 Human Resource Index places India at 119th position out of 169 countries. Recent anti-outsourcing legislation by America and the ensuing rise in visa fees for Indian companies would cast a shadow over trade talks. The business process industry brings billions of dollars to India each year; it employs around 2 million personnel. New legislation is expected to cost Indian IT enterprises up to $200 million per year. Keeping in views the urgency of creating more jobs for Americans, President Obama will not be able to alter the relevant law.

Much of the apparent strength of US-India relations is illusory. From Indian perspective it is based on its eagerness to strengthen negative images like anti China, anti Pakistan, monopoly over Indian Ocean, undercover vertical nuclear proliferation, weaponisation of outer space etc. The United States can no longer afford to carry along such baggage. The only way forward for the US is to work more closely with China. The stark reality is an ascendant China and a beleaguered America, groping for a way out of Asia. Overwhelming convergence of strategic interests between the US and India is unlikely. Despite Obama’s compulsion to accrue Indian contracts for cash starved American military industrial complex, the US is not likely to cross redlines in its policies towards Pakistan, Afghanistan, China and may be Iran; just to appease India. The summit is likely to be more of style than substance. Air Cdre Khalid is Masters in Political Science along with War and Strategic Studies. He has also done Air War

Course, Fellow of Air War College. Instructor’s Course. Senior Command & Staff course. Combat Commander’s Course. He has been a Directing Staff at various institutions of Pakistan Air Force. Presently he is a visitng faculty at: