Home Government How Can You Compromise with people whose Primary Mission is to Undermine...

How Can You Compromise with people whose Primary Mission is to Undermine America? 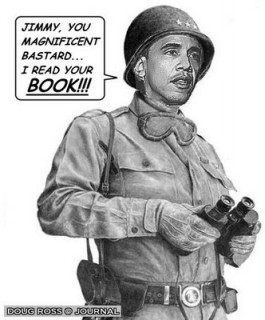 I love President Obama, but he’s scaring me. He could be one of the best presidents that America has ever had, but he seems to have one serious shortcoming – he doesn’t seem to have the killer instinct necessary to survive in Washington, D.C. I thought he’d learn something from the whipping that the Democrats just took in the last election, but he’s already talking about compromise.

How can you compromise with people who have clearly shown that their primary mission is to undermine America? All their talk about a smaller government and lowering the national debt is just a smokescreen. Yes, they want a smaller government – a government too small to curb their corporate greed. And while they claim they’re determined to lower the national debt, that doesn’t deter them from insisting on adding four trillion dollars to the debt by giving a tax cut to millionaires.

What the Republicans are actually after are three things – their return to power, the corporate control of America, and to be rid of this Black president, and not necessarily in that order.

Yeah, I said it. Racism is the driving force behind the GOP’s unprecedented anger against this administration. No, not all of them are racist, some are acting on greed, and others are simply dumb. But the greedy are the ones who are pulling the strings, and they’re relentlessly stoking the flames of racism within their social conservative stormtroopers to promote their own interests.

The last group is the one that President Obama should be appealing to, but instead, he seems to be fixated on the first two groups, people who he will never be able to appease. Many of us are scratching our heads over that. We simply cannot understand how a man who is otherwise so intelligent can be so hopelessly naive regarding this particular issue. Well, I think I know why.

I think it goes back to a coping mechanism that Obama developed early in life. As a child he’s lived all over the world, so he’s always been just a little bit different from everyone he’s known. He grew up as the ultimate outsider. On the one hand, that has been beneficial in his development, causing him to push himself to the limit in order to maintain his self-esteem; but on the other, it has caused him to develop a go-along-to-get-along coping strategy in order to fit in. While that strategy has obviously served him well earlier in life, that’s not what the American people want to see in a president, and it is the very last thing we need at this point in American history.

America is currently fighting for its very life, because corporatists within the Republican party have been allowed to become so powerful and so greedy since the Reagan administration that they’re not about to be reined in now. An entire generation of corporatists has come of age not knowing anything other than having their own way, so they’ll tear this nation apart before they’ll give up that power, and that’s exactly what they’re doing.

But what’s most horrifying about this situation is that most Americans are so distracted by the entertainment media, and brainwashed by the news media, that they don’t even know that they in a fight.

Let’s take a look at what’s happened to us since we last had a functional democracy. First, Reagan all but destroyed our unions, which made us totally dependent on the corporatists. Then, they destroyed our educational system, repealed the Fairness Doctrine, and gained control of 90% of all the media in the country. By taking control of the media they are now in control of what we think, and by destroying our educational system they deprived us of both our sense of history, and our ability to be independent thinkers – which led directly to the debacle in the last election.

They’ve now stacked the Supreme Court with conservative cronies. The court is even more conservative now than it was when they disenfranchised the American people and handpicked George Bush as our president in the 2000 election. Now, in their “citizens United” ruling, a corporation based in Dubai can have more control over our electoral system than America citizens. Can you see where this is going?

So it is essential that the American people wake up from their trance and start making some noise. It’s time that we let President Obama know, and in no uncertain terms, that we don’t want to hear the word compromise slip from his lips again for the next two years.

We’ve already been compromised to death. So at this point in our history we don’t need a diplomat – what we need is a general.