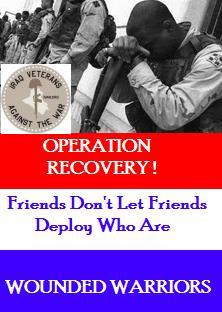 The following had been submitted to VT by Iraq Veterans Against the War (IVAW) as an update to the kickoff article we did on Afghanistan & Iraq Vets Call for End to Deployment of Traumatized Troops-Operation Recovery.

In an effort to raise public awareness about Operation Recovery to stop the deployment of traumatized troops, Iraq Veterans Against the War (IVAW) will be exposing information about the different forms of trauma troops and veterans experience. 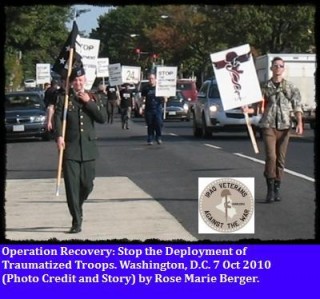 In the weeks leading up to Veterans Day, IVAW has been giving public presentations to educate the public about the realities of Post Traumatic Stress Disorder (PTSD), Traumatic Brain Injury (TBI), and Military Sexual Trauma (MST), conditions that affect hundreds of thousands of military members and veterans.

At the end of October, IVAW placed it’s focus on PTSD. As Veterans Day approaches, VT readers can help IVAW spread the word by sharing this information with your friends, family, and colleagues.

Click here to send a NY Times article about the surge in veteran deaths once they get home.

The Link Between PTSD and Suicide

In order to maintain the operations tempo to sustain the occupations in Iraq and Afghanistan our military is continuing to use exhausted and unhealthy troops who are sent to war over and over again on multiple deployments.

Common sense as well as the Pentagon’s own study tells us that increased exposure to traumatic events increases the likelihood of Post Traumatic Stress Disorder (PTSD).

A dangerous symptom of PTSD is suicidal thoughts and tendencies. 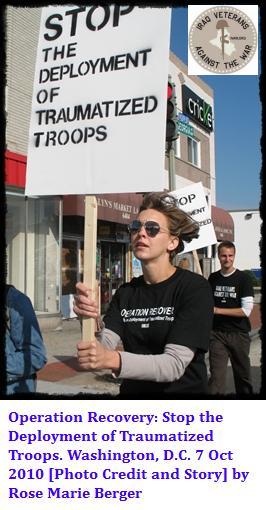 In an effort to de-stigmatize the issue of mental health within the military, the American Psychiatric Association initiated a call to reverse the policy of the President not sending condolence letters to families who have lost a service member due to suicide.  This is one step in addressing an overall military culture that stigmatizes those who seek help for mental or emotional distress, but there is a lot more work to do.

A recent study of veteran deaths in California reveals startling figures – between 2005 and 2008, three times more veterans died at home than died in combat in Iraq and Afghanistan during the same period.  The results of the study, described in a recent NY Times article by Aaron Glantz, counted the deaths of veterans by suicide, drug

overdoses, motorcycle accidents, and other risky behaviors linked to PTSD.  While the study was done just in California, there is no reason to think that similar death rates of veterans would not apply across the country.  The government isn’t counting these numbers, thus keeping under wraps the human costs of the ongoing occupations in Iraq and Afghanistan.

By spreading the word about the effects of redeploying traumatized troops you can help us stop the wars in Iraq and Afghanistan.

Thank you for your continued support.