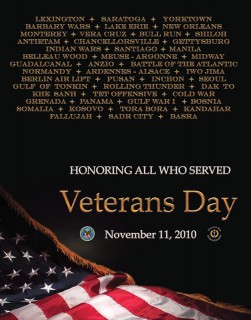 WASHINGTON (Nov. 11, 2010) – This Veterans Day, Secretary of Veterans Affairs Eric K. Shinseki calls on America to honor its 23 million Veterans by reaching out to them and their families with heartfelt thanks and encourage them to seek the benefits and services they have earned from the Department of Veterans Affairs (VA).

“As we observe Veterans Day, I look to everyone – families, friends and acquaintances in communities, large and small–to turn out and thank all our Veterans, from earlier eras and those who are just returning home,” said VA Secretary Shinseki.

Shinseki noted that America has made significant investments in Veterans benefits and services over the past 19 months: a 16 percent VA budget increase last year and a 10 percent increase in the 2011 budget request.

He said this is making it possible to increase Veterans’ access to benefits and health care services, help end the disability claims backlog, and eliminate Veterans’ homelessness by 2015. The Post 9/11 GI Bill has already sent more than 400,000 Veterans to college, and care and benefits will be extended to more Veterans who have illnesses related to exposure to Agent Orange and service during the first Persian Gulf War.

Under Shinseki, VA is taking unprecedented steps to reach out to Veterans and their families with a television ad campaign, a new VA blog, and other social media initiatives, and outreach teams traveling throughout rural communities. The goal is to let Veterans and their families know what services they are eligible for and how to access them. The emphasis is on meeting emergent transitional needs such as treatment for post-traumatic stress disorder (PTSD), which affects many Veterans, including those returning from the Middle East, as well as those who served in Vietnam four decades ago.

(http://www.youtube.com/user/DeptVetAffairs) postings. With more than 70,000 subscribers, VA has the largest Facebook subscriber base among cabinet-level agencies.

On Veterans Day, Shinseki will join White House and military officials, and leaders of major Veterans organizations, at the traditional Veterans Day wreath-laying ceremony at the Tomb of the Unknowns in Arlington National Cemetery at 11 a.m. Following the ceremony, VA will host an observance program in Arlington’s Memorial Amphitheater.

Across the country, from the rousing notes of the “Star Spangled Banner”

to the poignant bugle solo of “Taps,” Americans will celebrate U.S.

Veterans with music, ceremonies and speeches. Nearly 100 VA-sponsored activities are scheduled, highlighted by Birmingham’s 63rd annual Veterans Day parade and parades in Lexington and Denver; recognition ceremonies in Anchorage, Alaska, Chillicothe, Ohio, and Tomah, Wis.; concerts in Durham, N.C., Bath, N.Y., and Tucson, Ariz.; and the third annual Veterans Run/Walk in West Haven, Conn. The oath of citizenship will be administered to 25 Veterans at the Fort Sam Houston Cemetery in Texas as they become official citizens of the nation they served.

The Veterans Day National Committee has designated regional observance site status to Veterans Day programs at 54 sites in 29 states. Sites were selected on the basis of community involvement, regional impact and continuity. They are also eligible for support from the Department of Defense.

A guide to these sites and other information about Veterans Day is available on VA’s Veterans Day Web page at http://www.va.gov/opa/vetsday/ under “Regional Observances.” The page includes a variety of resources, including a teacher’s guide, a poster gallery and links to information about the Arlington National Cemetery ceremony.