Home World Eric Cantor and the Provoking of American Anti-Semitism

Eric Cantor’s Pledge of Allegiance to Israel over America

Zionists of all stripes incessantly complain about 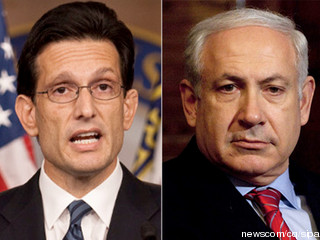 Rep. Cantor promised Netanyahu party will act as a “check” on the Obama administration.

antisemitism. They tell us that it is on the rise and that is why Israel is so important. They warn that when antisemitism inevitably reaches lethal levels Israel will be the only safe haven left for world’s Jews, including those oh so comfortable ones in the United States. The flip side of this alarmism is that the same Zionists are forever striving to turn the warning into a self-fulfilling prophecy. For instance, Israeli governments have behaved in such a brutal and illegal fashion toward the Palestinians that no self-respecting ethical human being can help but be indignant and angry. And, because of Zionist insistence that Israeli nationalism and Judaism are one in the same, half the world now thinks it’s the Jews who are collectively responsible for the sins of the Israelis.

The Israelis are not alone in acting in a manner that can only ruin the reputation of the Jews. For a long time American politicians have quietly allowed themselves to be dictated to by Israeli allied organizations such as AIPAC (American Israeli Public Affairs Committee). This corrupting process is usually hidden behind a facade of propaganda incorrectly describing Israel as a strategic asset, the only democracy in the Middle East, and a country sharing American values. As a consequence the public has hardly noticed as the interests of the United States are shaped to conform to those of Israel–with very negative results for the American position not only in the Middle East, but within the entire Muslim world. But now the corruption has reached a new level, one so open and brazen that the likelihood of the American public taking notice has, correspondingly, become more probable. And, when notice is taken, the possibility of a rise in American antisemitism also presents itself.

For this dangerous turn of events we can all thank a Republican political leader by the name of Eric Cantor. Cantor is a Congressional Representative from the Richmond Virginia who is presently competing for the position of GOP House Majority Leader. He styles himself as one of the party’s “young guns.” So what is it that Congressman Cantor has done that may well contribute to the a heightened level of American antisemitism? On Wednesday, November 10th Israeli Prime Minister Netanyahu was in Washington DC for a meeting with Secretary of State Hilary Clinton. But Cantor got to Netanyahu first and, according to the Congressman’s boastful press release, he “stressed that the new Republican majority will serve as a check on the [Obama] Administration ….He [Cantor] made clear that the Republican majority understands the special relationship between Israel and the United States, and that the security of each nation is reliant upon the other.”

How do we translate this? Essentially what Cantor did was tell the leader of a foreign country that he will protect that country from the official policies of the President of the United States–the person charged by the Constitution to carry out the nation’s foreign policy. Actually, the Congress, both Republicans and Democrats, have been supplying just this sort of protection for a very long time. But they have always done so surreptitiously. What is different with Cantor is that he has done this quite publically, letting us all know about it in a notice on his official stationary.

What Eric Cantor did on November 10th was illegal. He broke the law. The Law he boasted about violating is known as the Logan Act. This act makes it a felony for an American citizen “without authority of the United States” to interact “with any foreign government or any officer or agent thereof” with the intent to influence that government’s behavior on any disputes with the United States.

There are obviously disputes between the Obama administration and the Netanyahu government. And here comes Eric Cantor to tell the Israeli Prime Minister that he and the Republican Party will use the power of the House of Representatives to protect Israel from U.S. government policy. If that is not a communication made in such a way as to influence the behavior of a foreign power, nothing is! In addition, Cantor cannot claim ignorance of the law, for there can be no doubt that he is aware of the Logan Act. We know this to be true because he tried to use it against Nancy Pelosi in 2007 after she met briefly with President Assad of Syria. Pelosi, of course, met with the Syrian government with the full knowledge and approval of the State Department. Cantor, on the other, had no official sanction whatsoever.

So what did Cantor think he was doing on November 10th? The probable answer is that he was not thinking at all. Men like Cantor are so imbued with the notion of a “special relationship” that they have lost sight of the fact that Israel is a foreign country. After all, Israel has had a powerful special interest lobby operating in this country, distributing money to politicians on both sides of the aisle, for so long that it seems quite natural. Does Mr. Cantor realize that he can now be hoisted on his own petard–the Logan Act?

And herein lies the risk for American Jews. What seems so natural inside the Beltway, is losing its normalcy in the country at large. There is so much objectively unnatural about the U.S.- Israel relationship that if the general public actually starts paying attention things might turn nasty. There are the billions of dollars that go to a economically advanced country even when the US economy is hurting; there are all those UN vetoes that protect the same country in its incessant violation of international law; there is the fact that this money and protection is going to a land characterized by racist practices that would be illegal if carried out in the United States; there is the Israeli lobby’s involvement in the launching of the second Iraq war, and on it goes. What if the American people get angry about all of this? Who are they going to blame? The politicians? Probably. The Israelis and their Zionist lobby? For sure. And, because the Zionists are so insistent that Israel and Judaism are one in the same, the public may generalize out their discontent to American Jews in general.

It is hard to avoid the conclusion that Israel and its Zionist supporters, as well as the U.S. politicians who have so long cooperated with them, have placed American Jewry in potential jeopardy. Realization of that potential probably requires on-going economic bad times and foreign disaster. But how far are we from that? If things get bad enough, all it would take is a spark to reinvigorate an ancient prejudice that has long laid dormant in the U.S. I can think of no one more qualified, in terms of sheer unthinking brazenness, to ignite that spark than Congressman Eric Cantor from Virginia. Maybe that is what it means to be a Republican “top gun.”