NATO’s meeting to build political consensus across the alliance for the post-2011 phase of “gradually” handing over security responsibilities to the Afghan forces will be on the table in Lisbon this week. According to NATO Secretary General Anders Fogh Rasmussen, “The aim is for Afghan forces to be in the lead, countrywide, of security operations by the end of 2014.” 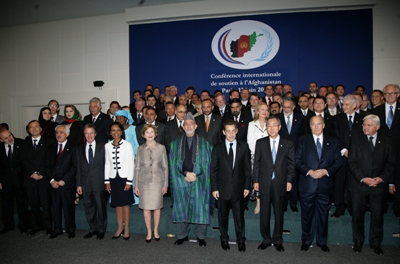 Subsequently Lt. Gen. William Caldwell, who’s in charge of the NATO training effort in Afghanistan, was explicit about what the “end of 2014” does and doesn’t mean: “It doesn’t mean that there will still not be coalition forces here in support of them,” Caldwell said, “but the primary lead for security in this country must have been established with the Afghan security forces in the lead by the end of 2014.”

Similarly Mr. Karzai has also joined this “milonguero” renaissance dance, but with the infamous Afghani style tempo of “Asta-Boro” – go slow in Dari. Although he wants to see the West involved until 2014 when his term ends, for no other reason than to siphon off billions of aid and divert funding to feed the corrupt patronage system in place led by the Karzai family and affiliated cronies, at the same time he is attempting to win political points with Afghans by trying to be his own man and all of a sudden after a decade he is dislodging himself from the war strategy that he agreed in the very outset.

As the Afghan president railed just recently: “The United States must reduce the visibility and intensity of its military operations in Afghanistan and end the increased U.S. Special Operations forces night raids that aggravate Afghans and could exacerbate the Taliban insurgence.”

But there’s a word for politicians who require the public to listen carefully to their statements in order to understand what they are really saying – they’re called liars. The whole lot involved is putting out a line suggesting, on its face, that the war will wind down or end, when in all actuality they’re promising no such thing. And lending the impression that there are endpoints for the war is an abuse of the public trust.

Personally, I can comprehend and empathize with a staggered approach to deescalating the war. However, the reason for the continual excessive ambiguity is to deliver different messages to different audiences: to the Afghans and Pakistanis and the insurgents, it’s that we’re staying maybe attached with some refutable, jagged and ludicrous direction by Mr. Karazai, and to the American public, it is that we’re going.

In the views of some policy gurus on Afghanistan, a face-saving coalition exit isn’t possible unless President Karzai wins over at least some of the Taliban to give a semblance that his administration represents the ethnic mix of the war-torn country.

But, it is preposterous notion to think that Mr. Karzai is the Mustafa Kemal Ataturk of Afghanistan, who can unite the deeply disenfranchised Afghan population by 2014. He has been unable to do so for the past nine years, and it is a far-fetched idea that anything will change going forward.

In addition, Mr. Karzai’s recent Iranian “attaboy-gratitude” or “bakhshish” for his stance against Obama administration’s pressure to fight corruption in his government will not help in his efforts to secure Pashtun support. Indeed Pashtuns are spoiled with credible, dignified and moral leaders akin to President Daud Khan and King Zahir Shah, who ruled according to the moral principles of Pashtunwali and approval by other ethnic minorities in Afghanistan.

Meanwhile, Washington insists that Pakistan’s fate hinges on the outcome in Afghanistan, but if that’s so, why do the Pakistanis continue to provide the Taliban with sanctuary and arms even as they urge the U.S. to fight on in Afghanistan? Indeed, this question should be referred to the Pakistani military—the dominant player in Pakistan—as what it wants.

The real answer is the Pakistani military wants to stoke anti-Indian feelings so that its primacy as Pakistan’s protector is maintained and an ever larger share of the country’s resources are diverted to its use. Merely keeping India out of Afghanistan (which the situation is true today and likely to remain so) is not going to satisfy the Pakistani military. Pakistan thirsts for control in Afghanistan, and until this is addressed, peace will never be achieved in Afghanistan.

At last, this Tango sequence of political steps relies on the connection within the duo and the musicality of the cohorts for its flavor and delight. Hence, and so far, their trustworthiness for a true maneuverability to end the war in Afghanistan is improbable. The only solution to this quandary is a national reconciliation with no political dancers in the mix. Else the last tango will never be the last.