Home Veterans There is a Free Lunch in Paris 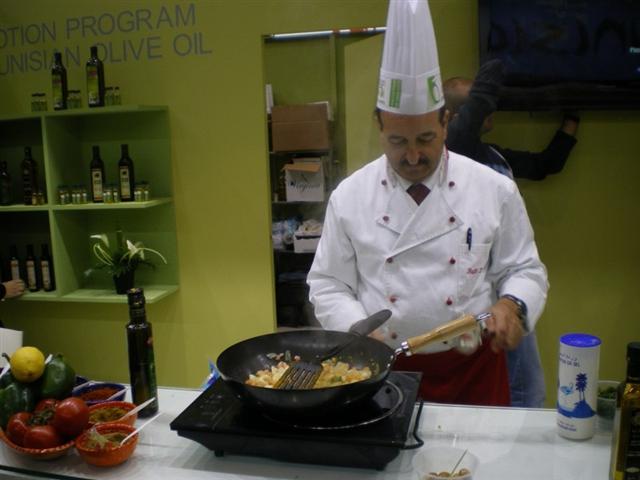 Every two years, SIAL ,the world’s largest food event for professionals in the food sector,  comes to Paris.  This year SIAL , the global food marketplace ,was held from October 17- October 21 at Paris Nord Villepinte which is easily accessible by suburban trains. It was held during France’s transportation strike, but one out of two suburban trains ran. SIAL provided free shuttle buses for visitors from Charles De Gaulle Airport, Porte Maillot in the north of Paris and Montparnasse in the south of Paris.

It is a show for professionals in the food industries:  trade, retail, industries, food services and other food related services.  It was estimated that more than 148,000 visitors of which 45% retailers and distributors , from more than 185 countries would visit SIAL in 2010  Also it is interesting to note that the projection of 15,000 journalists including the four from Veterans Today from 45 countries.

There were over250 conferences, meetings and workshops. With over 5,700 exhibitors of which 80% were international there was plenty to see and also plenty to eat. Visitors could search for food products internationally in a few days in a single venue with innovative food products and new ideas. Sales volume for food products is very high.  According to a published report by Xerfi Global 2009  these are the amazing figures  for the worldwide retail sales volume of the 12 leading retail groups worldwide  in  billions of Euros.  Walmart is  the leader.

Visitors had  to walk  a lot at SIAL because the  exhibition was divided amongst 8 halls located close to each other and that helped them burn off the calories from eating so much food. The most interesting halls were: Halls 1, 2 and 3 and 4  which featured  National Pavilions and Regions of the World Hall 5 Alcoholic and Non-Alcoholic Beverages Bakery, pastry and confectionery Regions of France Seafood Products Preserves Grocery Products Hall 6 Cured meat Fruits and Vegetables Poultry Meat Frozen foods Dairy and Egg Products Sustainable development is very important in the food industry  for environmental, social and economic reasons.

There was an area for this in Hall 1,  More than 500 organic products were presented at SIAL. The great thing about SIAL is that there really is a free lunch because  each day Gennady and Lidiya Sevastanov, Didier  Lambert  and I from Veterans Today sampled all kinds of  gourmet  cheese from different areas of France, Switzerland  Holland   Spain and other countries.  We ate all the delicious Spanish specialties  Jambon  Serrano, Ham from Iberia, and other Spanish food.,  We couldn’t resist the delicious Italian pasta and pizza from Italy. Chocolate exhibitors from France Belgium, and Switzerland  gave out free samples.  Belgium waffles were prepared in front of us and were warm and tasty. Of course the vendors  asked us if we were interested in selling  their products internationally.

We visited the USA Pavilion and tasted Smartfood Popcorn which won an award for sweet popcorn, blueberries, cranberries and drank orange juice from Florida.  Civitan International was there. Sun Maid Growers of California let us taste their famous  raisins.  Sunset almonds sampled premium almonds and walnuts.  The lady from Seneca Foods told me she enjoys living in upstate New York and we had a good conversation comparing life in USA and life in Paris.  Others from USA were telling us about where they lived.  Having lived for several years in Atlanta, I enjoyed meeting the people from AJC for whom we had done translations  We discussed how Atlanta has changed.  The vendors liked the opportunity to visit Paris and go out to bars after the show closed. There were many new products.

One I liked was a new vodka cocktail which is a blend of vodka with cranberry juice and vodka with lemon juice. They were seeking distributors and not only gave tastes of the beverages but also free samples. I liked tasting the sardines from Morocco.  also enjoyed the delicious Moroccan tea which was poured in the Moroccan style  from a teapot very high   by a man dressed in traditional clothes. We found that the French wines were just about the best.

The lady serving the cheesecake lives near Reading, PA and told me that my  Albright College, where my father graduated in  Reading, PA  has a good reputation. We stopped by a booth after the closing on Tuesday night and found them serving all kinds of alcoholic drinks at a bar. .  The bartender jump on the bar and danced!  What an unusual way to promote  beverages. The last day is a day for great free lunches and also to carry back as many samples as we could  The vendors did  not want to take all their products home  . I went   with Didier Lambert and took my small carry-on suitcase and a large plastic bag.

A  man trying to scalp tickets told me that I would not be able to enter with an empty suitcase. A security guard stopped me and when he told me this I offered to put some notebooks in the suitcase. Then  he let me in. We ate and ate all kinds of food and drank coffee, wine and beer. We sampled fish, meat, bread, pasta and then ate desserts. When they gave out samples we rushed to grab as many as we could. Others too were racing to get the samples Being well located in the area for cold cuts we got enough samples for several weeks and even gave some away to friends.  The ladies from Guadeloupe gave us free samples of coffee, tea a pen and a key chain.

We forgot to bring a thermal bag to keep the frozen food fresh but we took it anyway. Loaded down, we decided to  take the suburban train instead of the shuttle. It was a good decision because after we entered the station we found a table with representatives from Colombia serving coffee, orange juice and delicious French pastries. There was more food for us to eat before we arrived home. We enjoyed talking to the people we met at SIAL l both visitors and exhibitors, feasting on fine food and also getting so many samples.

SIAL will be held  from May 11- May 13 in Toronto and in August  in Buenos Aires. It was interesting to meet professionals in the food industry from many different countries and talk with both the vendors and visitors.  SIAL was more than a free lunch. It was a cultural food experience.