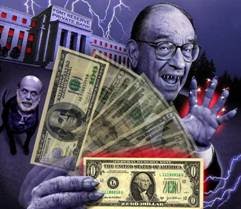 The handwriting is on the wall and yet no one, from capitol hill to Wall Street, apparently wants to talk about it. The dollar’s demise, however, is obvious to the informed and knowledgeable ~ for its death is eventually inevitable: Allen L Roland

First some history ~ The dollar became the world’s reserve currency when President Nixon abandoned the gold standard in the 1970’s. The dollar is used for 43% of all cross-border transactions, and 63% of the world’s central bank foreign currency reserves are in dollars. The next most popular currency? The euro, which comprises only 30% of reserves. Although it is increasing rapidly, it is still less than half the amount held in dollars.

With that said, there are troubling signs for the dollar ~ On Thanksgiving eve the English language China Daily and People’s Daily Online reported that Russia and China have concluded an agreement to abandon the use of the US dollar in their bilateral trade and to use their own currencies in its place. Here’s the story ~

Chalmers Johnson has stated that if Saudi Arabia decided to be paid for its oil in Euros instead of dollars ~ the stock market would collapse. The crisis of the dollar is obviously a reflection of a deeply, perhaps terminally, ill American economy that is virtually supported by a voracious Military / Industrial complex and an unsustainable debt structure.

Leading economic trends forecaster Gerald Celente feels the crisis of the dollar is irreversible ~ “ If the dollar collapses, it would spell economic disaster not just for the United States, but for the world … It is more than just the demise of the dollar ~ this is going to be felt worldwide. There’s a major financial crisis ahead. The United States, the world’s superpower, is failing on its most basic level”

And the reason for the future demise of the American currency, Celente says

is the disproportionate financial system: “We can’t print money out of thin air, backed by nothing and producing practically nothing.”

So what would it look like if the dollar collapsed?

A dollar collapse is when the value of the dollar falls so fast that all those who hold dollars panic, and sell them at any cost. In this scenario, sellers would include: numerous foreign governments who hold U.S. Treasuries, traders in exchange rate futures who trade the dollar versus other currencies, and most certainly individual investors who demand assets denominated in anything other than dollars ~ such as gold and silver.

Here’s a hypothetical look at how the collapse of the US dollar may affect the world. Must see 7 minute video ~ The Day The Dollar Died