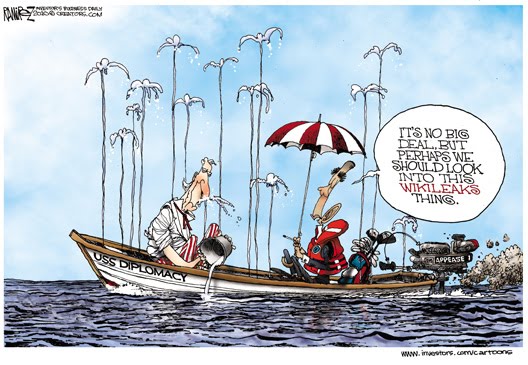 Wikileaks has confirmed to the world that the Emperor is naked but America has yet to hold up the mirror to witness the extent of its own moral bankruptcy: Allen L Roland

There is a tide in the affairs of men
Which, taken at the flood, leads on to fortune;

Omitted, all the voyage of their life Is bound in shallows and in miseries.
On such a full sea are we now afloat, And we must take the current when it serves, Or lose our ventures.

The good ship America is leaking badly and Wikileaks has confirmed the extent of our miseries and moral bankruptcy. Does the Obama administration have the courage to look at itself and the outdated fear-based Cheney/Bush policies and diplomacy it inherited ~ and instead ride the rising tide of transparency and truth or will it continue to be bound in the shallows of moral and financial irrelevance in a rapidly uniting and interdependent world?

America is at an important moral crossroads and Wikileaks has helped set the stage for Americans to fully grasp this moment. Wikileaks began on Sunday November 28th publishing 251,287 leaked United States embassy cables, the largest set of confidential documents ever to be released into the public domain. The documents gave the world an unprecedented insight into US Government foreign activities.

The cables, which date from 1966 up until the end of February of 2010, contain confidential communications between 274 embassies in countries throughout the world and the State Department in Washington DC. and 15,652 of the cables are classified Secret.

In summary, The cables show the extent of US spying on its allies and the UN; the blatant turning a blind eye to corruption and human rights abuse in its “client states”; the backroom deals with supposedly neutral countries; and the measures US diplomats take to advance those who have access to them ~ but now let’s concentrate on the flagship of the Obama Administration’s moral disintegration ~ Afghanistan.

This in now Obama’s Occupation ( not War ) and yesterdays surprise three hour cheerleading visit to the troops at Bagram air base, Afghanistan must be seen in relationship to Wikileaks revealing of the ongoing staggering scale of Afghan corruption. Transparency International, an advocacy organization that tracks government corruption around the globe, ranks Afghanistan as the world’s third most corrupt country ~ only Somalia and Myanmar are ranked above it.

The Wikileaks cables describe a country where everything is for sale ~ where corruption, fueled by an illicit narcotics industry, pervades every level of Afghan society from the illegally elected and American stooge President Hamid Karzai to the province governors and largely unregulated banking infrastructure.

Obama’s quick visit comes amid tensions with Karzai and conflicting reports about the progress of the U.S.-led campaign to reverse Taliban gains in Afghanistan ~ who are increasingly being seen by the populace as freedom fighters against the American and UN occupiers.

The last refuge of a scoundrel is patriotism and Obama has proved himself as adept as his predecessor, George W Bush, in draping himself around the troops and the flag when things are not going politically well.

The first step in transformation is the truth and transparency and Wikileaks has provided a needed, if somewhat vetted, platform for the truth to work its way to the surface of our consciousness~ particularly regarding our incredibly expensive and draining occupation of Afghanistan.

As such, Wikileaks has helped to fully expose how US fear based diplomacy is flooding the Middle East with weapons, has continued the arms race, still condones Israel’s crimes against the Palestinians and still continues to maintain draining wars and occupations that have cost the American Taxpayer hundreds of billions of dollars.

President Obama better look into this Wikileaks thing soon because, believe me, the world is looking and reading it with many more revelations to come. The Emperor is now clearly naked and unless Obama looks in the mirror and dramatically changes course ~ his administration will wash up on the rocks of a one term presidency with Afghanistan clearly visible as the albatross around his neck.

Although the Wikileaks site has lost its domain name service – meaning its web address Wikileaks.org no longer works – the site can still be accessed via its less user-friendly IP address