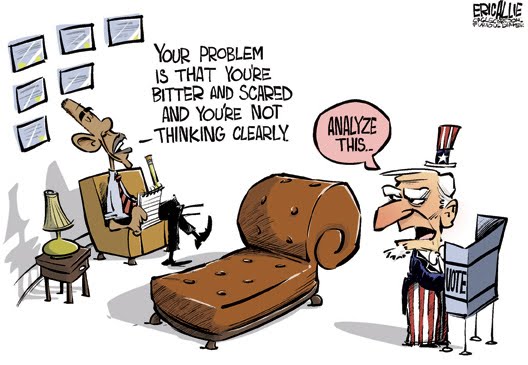 President Obama still doesn’t get the message from 2008 that he was elected as an agent of change ~ instead he refused to lead, lost his base, wasted his mandate  and thus ensured himself of a one term presidency: Allen L Roland

Here is a recent quote from President Barack Obama to reporters after he and congressional Republicans pledged warily to seek common ground on tax cuts and reducing spending in their first meeting since the midterm elections and where Obama apologized to the Republicans for not being more cooperative.“The American people did not vote for gridlock. They didn’t vote for unyielding partisanship. They’re demanding cooperation and they’re demanding progress. “

“The American people voted for dramatic change and mistakenly saw Obama as an agent of that change. They did not vote for the status quo or more of the same ~ which is what they have received from President Obama. They demanded real leadership and change while Obama has postured leadership but delivered equivocation and appeasement thus insuring his one term presidency “

New York Times columnist Paul Krugman sums it up ~ “It’s hard to escape the impression that Republicans have taken Obama’s measure ~ that they’re calling his bluff in the belief that he can be counted on to fold. And it’s also hard to escape the impression that they’re right… all indications are that the party will have to look elsewhere for the leadership it needs.”

The basic problem is that the Obama administration unfortunately is just as committed to American exceptionalism as the morally bankrupt Bush/Cheney was ~ which explains the present two party Oligarchy.

The time has come to clearly define the enemy as this two party oligarchy and concentrate on core common-ground issues versus the lesser of two evils  ~ here are the seven key core issues that keep 99% of the US population without political representation:

First we define and articulate the change we desire and the true leaders and change agents will appear. We are the ones we have been waiting for.

Author Details
Allen L Roland, PhD
Allen L Roland, PhD is a Freelance Alternative Press Online columnist. He is also a heart centered spiritual consultant, author and lecturer who also shares a weekly political and social commentary on his web site at AllenRoland.com. He also guest hosts Truthtalk, a national radio show that airs monthly. He is available for comments, interviews, speaking engagements as well as private consultations via email at [email protected]. Roland is a twin who was born in Boston, Massachusetts, survived a dysfunctional family, pursued and lived his dreams, including becoming a Navy supersonic carrier pilot, finding himself by fully opening his heart, writing three books, siring four children ~ and is still living his ultimate dream by making a difference from a place of love, celebration and service. His Ph.D dissertation THE UNIFIED FIELD was chosen by Common Boundary and Noetic Science Institute, in their 1998 national dissertation contest, as one of the top three finalists for combining spirituality and psychology. His ongoing heart centered work as a consultant with veterans with PTSD, is the most satisfying work of his life. Allen’s online newsletter, columns and radio broadcasts are committed to the truth ~ as he sees it ~ for only the truth is revolutionary.
http://www.allenroland.com
[email protected]nd.com
ATTENTION READERS
Due to the nature of independent content, VT cannot guarantee content validity.
We ask you to Read Our Content Policy so a clear comprehension of VT's independent non-censored media is understood and given its proper place in the world of news, opinion and media.