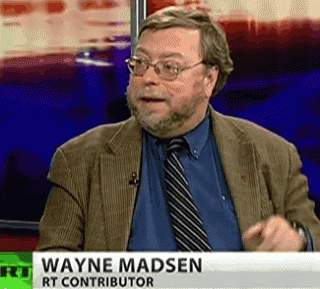 Journalist and former intelligence officer Wayne Madsen clearly hits one out of the park with this interview on RT (Russia Today.)  His take on Wikileaks is clear and reality based despite the desire to “soft peddle” on the subject by the interviewer.  We will let Wayne speak for Wayne on this subject.

The other issue, a very devisive one, UFOs, is mentioned as the next Wikileak.  It is not covered in substance on the video.  I have been getting continual feedback out of the DOD on this subject, long the “Holy Grail” of the intel world.  Warnings have been coming out about the United States having UFO technology for decades, capabilities we have kept secret from the public, are in the “chatter world” every day.

As to whether recent stories about arsenic based life forms, supposedly conclusive proof that off-planet life exists, are a precursor to some announcement and Wikileaks is another way of softening the public up for “the other shoe to drop” is not yet seen.

However, I suspect this is exactly the case.  What is really funny is that the media has long treated 9/11 and the revelations about Building 7 as conspiracy theory at the level of UFO stories.  Now, the idea of having to eat both subjects is funny.  First Fox broke 9/11 and the controlled demolition of Building 7 as fact, not fiction, a humiliating blow for those who spent years backing the government’s wild conspiracy theory about imaginary Arabs with box cutters, now we are forewarned that UFO’s are now going to become “hard news.”

The real joke, of course, is that our news has long been crazier than any conspiracy theory anyway.  Who would notice daily UFO reports and interviews with “little green men?”