It’s common knowledge just about everyone has an angle or tool in the Wikileaks exercise, but the manipulation by the usual players—with two casualties being Julian Assange and the truth—is taking off as Assange’s arrest is portrayed as though Assange is “Osama bin Laden or something” by the American media. 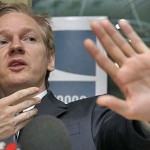 By Glenn Greenwald in Salon

1) In The New Republic today, Todd Gitlin writes an entire anti-WikiLeaks column that is based on an absolute factual falsehood.  Anyone listening to most media accounts would believe that WikiLeaks has indiscriminately published all 250,000 of the diplomatic cables it possesses, and Gitlin — in the course of denouncing Julian Assange — bolsters this falsehood:  “Wikileaks’s huge data dump, including the names of agents and recent diplomatic cables, is indiscriminate” and Assange is “fighting for a world of total transparency.”

The reality is the exact opposite— literally — of what Gitlin told TNRreaders.  WikiLeaks has posted to its website only 960 of the 251,297 diplomatic cables it has.  Almost every one of these cables was first published by one of its newspaper partners which are disclosing them (The Guardian, the NYT, El Pais, Le Monde, Der Speigel, etc.).  Moreover, the cables posted by WikiLeaks were not only first published by these newspapers, but contain the redactions applied by those papers to protect innocent people and otherwise minimize harm.  Here is an AP article from yesterday detailing this process:

[T]he group is releasing only a trickle of documents at a time from a trove of a quarter-million, and only after considering advice from five news organizations with which it chose to share all of the material. “They are releasing the documents we selected,” Le Monde’s managing editor, Sylvie Kauffmann, said in an interview at the newspaper’s Paris headquarters. . . .

“The cables we have release correspond to stories released by our main stream media partners and ourselves. They have been redacted by the journalists working on the stories, as these people must know the material well in order to write about it,” WikiLeaks founder Julian Assange said in a question-and-answer session on The Guardian’s website Friday.

Just as they did prior to releasing the Afghanistan war documents, WikiLeaks — according to AP — “appealed to the U.S. ambassador in London, asking the U.S. government to confidentially help him determine what needed to be redacted from the cables before they were publicly released.”  Although the U.S. — again — refused to give such guidance, WikiLeaks worked closely with these media outlets to ensure that any material which has no valid public interest value and could harm innocent people was withheld.  And Assange’s frequent commitments to engage in “harm minimization”when releasing documents gives the lie to Gitlin’s assertion that he is “fighting for a world of total transparency.”

I understand that the media has repeated over and over the false claim that WikiLeaks “dumped” all 250,000 diplomatic cables on the Internet — which is presumably how this falsehood made its way into Gitlin’s brain and then into his column — but that’s no excuse for him and TNReditors failing to undertake the most minimal due diligence (such as, say, checking WikiLeaks’ website) before publishing this claim.  I’ve emailed Gitlin and TNR Editor-in-Chief Franklin Foer early this morning and advised them of the need for a correction, but have heard nothing.  I will post any reply I get.  They’re entitled to condemn WikiLeaks all they want, but not to propagate this factual falsehood.

(2) According to The New York Times‘ Brian Stelter, Matt Lauer — when announcing Assange’s arrest in London this morning — proclaimed:  “The international manhunt for Julian Assange is over” — as though Assange is Osama bin Laden or something.  I don’t know if it’s sheer empty-headedness or excessive servile-to-power syndrome — probably both, as is usually the case — but that claim is both painfully dumb and misleading.  There was no valid arrest warrant in England for Assange until yesterday; he then immediately turned himself into British law enforcement.  There was no “international manhunt.”  How long before Matt Lauer and his friends start featuring playing cards with all the WikiLeaks Villains on the them(“and here we have Julian Assange, the Terrorist Mastermind, who is the Ace of Spades!”)?  Answer:  as soon as the Government produces them and hands them to the media with instructions to use them.

(3)Democratic Senator Dianne Feinstein ran today to The Wall Street Journal Op-Ed page to call for the prosecution of Assange under the Espionage Act of 1917.  Legal experts overwhelmingly believe that any such prosecution under that law would be extremely difficult and “extremely dangerous,” but that’s of no concern to the Surveillance-State-protecting, Iraq-War-supporting, defense-contractor-plutocrat:  the “liberal” Democratic Senator from California.  To argue this, she invokes the most tired and simple-minded platitude beloved by all those who want to curtail basic press and speech freedoms:  “Just as the First Amendment is not a license to yell ‘Fire!’ in a crowded theater, it is also not a license to jeopardize national security.”

Every line of pro-prosecution rationale cited by Feinstein applies equally to journalists — includingespecially the newspapers from around the world which are publishing all of the same diplomatic cables as WikiLeaks is, and which are publishing them before WikiLeaks even does.  How can it possibly be that WikiLeaks should be prosecuted for espionage, but not The New York Times, or The Guardian, or any other newspaper that publishes these cables?

In 2006, Alberto Gonzales threatened to prosecute The New York Times for revealing Bush’s illegal NSA program, and The Weekly Standard ran numerous articles calling for the prosecution of NYT journalists and editors under the Espionage Act for having done so.  Bill Bennett demanded the prosecution of The Washington Post‘s Dana Priest for revealing the CIA black sites.  How can all the Good Democrats who condemned that mentality possibly not condemn Dianne Feinstein and those who think like her?  What’s the difference?

(4) Here is the American justice system under Obama in a nutshell: 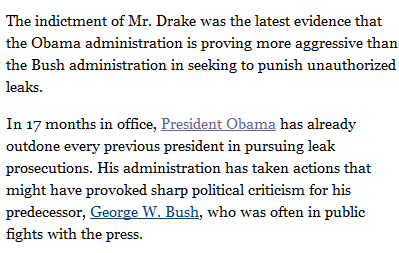 To recap “Obama justice”:  if you create an illegal worldwide torture regime, illegally spy on Americans without warrants, abduct people with no legal authority, or invade and destroy another country based on false claims, then you are fully protected.  But if you expose any of the evils secretly perpetrated as part of those lawless actions — by publishing the truth about what was done — then you are an Evil Criminal who deserves the harshest possible prosecution.

(5) I was on Democracy Nowthis morning talking about Assange’s arrest; in particular, I was describing why and how I believe that these attacks on WikiLeaks are a literal war over who controls the Internet and the purposes to which it can be used (see my post yesterday for some of that explanation):

UPDATE:  Visa has now joined Master Card— and Paypal — in refusing to process donations to WikiLeaks or Assange.   Assange has an Op-Ed in The Australiantoday that is very worth   reading.  And Assange was denied bail today by a London court despite having several people willing to post a $150,000 bond for him; as a result, he will remain in jail until at least December 13, though WikiLeaks will continue publishing cables.