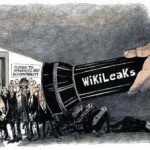 Tickers on different news channels were running fast at the bottom of the television screen. It was the evening before the next batch of Wikileaks were due for publication.

I made sure to buy The Guardian – one of five newspapers publishing the documents. With remote control in hand, I was browsing through Sky News, BBC, CNN, Al-Jazeera and Press TV. To the best of my recollection, it was Sky News which caught my eye. The breaking news referred to a planned Israeli nuclear attack on two American cities, which were to be linked to Pakistan. America would have had a cause to respond in kind and take out Pakistani nuclear sites. I couldn’t believe my eyes! I rewound the news to double check what I had just read. Thinking details would be published in the Guardian newspaper the following day I did not record it. Later, I rang a friend and told him about the mind boggling news. The bizarre news kept me awake most of the night.

The next day I got the newspaper and went through it page by page. To my surprise, the “ticker news” could not be seen anywhere. I read it a couple of times but failed to find the particular piece. I could not understand how the newspaper missed such an important part of the leak? In pursuit, I opened the Wikileaks’ website and browsed through it carefully; no luck again. Then, I Googled relevant questions pertaining to Israel; still no luck! To make it more direct, I refined my search based on the information I had read on television. Again no reference. The news had just disappeared from cyberspace. Doubts started emerging whether I had really seen that segment which was embedded in my mind despite me vividly remembering its content. In fact I called a friend about it. So what happened to the news?

The only explanation I can think of is that the news item must have leaked out by mistake and then swiftly been retracted. After all it is common knowledge that the leaks are selective. I have no idea who else watched it during that brief period it was on the air. Was it a coincidence that at that very moment I was browsing through the channels? Many would say yes. But I don’t believe in coincidences. I call them part of ‘cosmic language’. All it means is that nature talks to us in its own language that has no syllabi. I may write on this subject some other time. But for now I had to find the ‘missing leak’.

During my search I came to know about a basic fact that even the embarrassment factor was not that high for the politicians and foreign diplomats as they all understood each other and routinely lied which explains the uniformity in their reaction to the leaks by denying them. It also became apparent that the leaks related to Israel were primarily Iran-centric and that Iran’s nukes pose an “existentialist threat” to Israel. It was interesting to find that before the leaks were publicized Natanyahu did not think they would seriously damage Israel’s position. No wonder when he visited jubilantly Tel Aviv’s Beit Sokolow, the home of the Israeli Journalists Association, for the prime minister’s annual meeting with the Editors Committee, he was all smiles. This is the place where Ben Gurion used to hold secret meetings. Last year he skipped the event; however, this time around it was different because of the Wikileaks publication. He showed up to display his political command by sticking to his public agenda and sending a message to the White House of what was befalling President Obama. As if he knew there was now no fear that Washington would persist on the question of a settlement freeze or to accelerate negotiations on withdrawal from the territories. He felt confident that the settlement issue would take a back seat and it was time to press on other issues such as extremism in Arab and Muslim world.

At Beit Sokolow he announced “no one will now be able to allege that Israel is acting irresponsibly”. Then he spoke about the Arab leaders urging them to “speak openly about Iran what they have been whispering to the Americans” Speaking his language in an interview with Time Magazine, Julian Assange sent an identical message “We can see the Israeli Prime Minister [Benjamin] Natanyahu coming out with a very interesting statement that leaders should speak in public like they do in private whenever they can”.

Natanyahu was proud that Israel maintained information security and that sensitive conversations were not conveyed in diplomatic cables but in face-to-face meetings or via secure telephones. For a split second that “mysterious ticker” flashed back and I thought if only Natanyahu knew that a blunder had been committed by someone somewhere exposing Israel’s intentions to start a nuclear nightmare!

He seemed content with the outcome of Wikileaks, ignoring what Huseyin Celik, the deputy leader of Turkish Prime Minister Erdogan’s AKP Party had said about Israel. Celic accused Israel of engineering the leaks, questioning how Israel could announce before the release that it would not suffer from its publication. He queried, “How did they know that?”

Instead, Natanyahu was quoting Arab leaders from Egypt, Jordan and Persian Gulf States, that they were also fearful of the Iranian threat. He was right in his statement because Sheikh Mohammed bin Zayed, the crown prince of Abu Dhabi warned, “Iran will threaten Israel’s existence should it go nuclear.” He called Ahmadinejad a “Hitler”, proposing that “if air strikes will not do the job in Iran the ground troops should be sent in.” Similarly, Saudi King Abdullah wanted the U.S. to “cut off the head of the snake”. Another UAE leader gave his reasons for Iran-bashing by saying that “Iran is establishing ‘sleeper emirates’ across the Muslim world including south Lebanon, Gaza, Kuwait, Bahrain and the Eastern Province of Saudi Arabia with the mother of all ‘emirates’ in southern Iraq and now in Yemen.” Similar sentiments were heard from other pro-American leaders in the Arab world. One Israeli official stated, “the Arab countries are pushing United States towards military action more forcefully than Israel”.

As opposed to these reports the American intellectual Noam Chomsky cited a Brookings Institution poll that 80 per cent of Arabs consider Israel as the main threat followed by the U.S. at 77 per cent. Only 10 per cent rated Iran as a danger. He concluded by stating, “When they talk about Arabs, they mean the Arab dictators, not the population, which is overwhelmingly opposed to the conclusions that the analysts-Clinton and the media-have drawn.” According to another report, the Arab rulers “dare follow the American line completely, particularly if this includes a strike against Iran if they did, they’d risk popular revolts”.

I found nothing but Iran-centric Wikileaks in the Jerusalem Post and other Israeli newspapers. They were reminiscent of the “Zimmermann Telegram” during World War I. The declassified documents of history tell us that in early 1917 the British cryptography unit (“Room 40” ) decoded a telegram from German Foreign Minister Arthur Zimmermann to his country’s embassy in Mexico City proposing that the Mexicans launch a war against United States and retake Texas. The British showed the telegram to American diplomats. It prompted the Congress and U.S. President Woodrow Wilson to declare war on Germany which contributed to Germany’s defeat at the end of 1918.

A few months after this episode of the “Zimmermann Telegram” the Bolshevik Revolution took place in Russia. The new leadership wanted to declassify the documents of the Czar’s Foreign Ministry. The task was given to Leon Trosky – the people’s commissar for foreign affairs. One of the documents revealed the 1916 Sykes-Picot Agreement in which Britain and France planned how they would carve up the Ottoman Empire and also promised a hefty slice to Russia which desired Istanbul and the Black Sea straits. What if the secrets were revealed at that time? Would it have changed the history?

The point I am trying to make is that exposure of secrets can influence events if they appear at the right moment, as in the case of the Zimmermann telegram. So what could be the reason for Wikileaks and how will it affect short and long-term relations amongst Muslim countries vis-a-vis pro-Israel lobbies in America. Would Natanyahu be resting in a comfort zone and constantly pressurizing Obama to stop interfering in the internal matters of Israel especially the settlements issue had the ‘missing leak’ been circulated? Here comes the million dollar question. Is there a ‘missing leak’ exposing Israel’s heinous motives despite the leaked documents stating that “there is no Israel lobby involvement to involuntarily force US in a war to serve Jewish interests” and that “the world opinion is wielding towards declaring Iran as the head of a snake that must be cut off as the Saudi potentate described it” Not many would believe in the existence of such a ‘missing leak’. Even my own lawyer daughter thinks I may have misread the news. But deep down, I know what I saw and read that evening. Perhaps 50 years from now this “ticker news” may show up in a slue of declassified documents similar to Zimmerman’s secret telegram. The leaked telegram changed the course of history but the ‘missing leak’ cannot; as long as it remains missing.