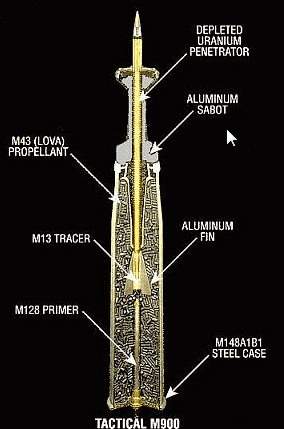 The news on DU is international but you do not hear it in the US with main stream media or in newspapers.

The news on DU is international but you do not hear it in the US with main stream media or in newspapers.  This article below is hardhitting and is right on topic.  My question is where is America’s coverage of this hot topic that is affecting our veterans from the Gulf War of 1990-91 to our current troops?  It affects the people of so many countries now and will for the indefinite future.  Where is the hard scientific medical research on DU for America?  Where is the data on how many females of the Gulf War 1990-91 that have had cancer of the breast?  Where is the data on the other cancers?

How much of this data is being censored and classified under the National Security?  How much of this corruption, military and arms trade, omission of data, going to cost of us in lives of our veterans?  How many of your elected representatives are aware of this problem?  How much is being paid to clean up the contaminated areas of war?  How much is this affecting the native population and their reaction to accepting the good intents of America?  How is this going to compare to the old history of Agent Orange and Vietnam now trying to get help from US to care for Agent Orange victims in Vietnam?

So many questions and no answers!  Why are the experts on DU not allowed to testify themselves?  Why no hearings focusing on this continuing health problem?  Where is COL, Dr Durakovic and why has he not been allowed to testify on the hill in DC?  Why does every piece of legislation that has DU in it ignored on the hill in DC?  Why are the gulf war veterans 1990-91 still getting the run around at the VA, denial of compensation, denial of care, denial of health care personnel that are uneducated on our risk factors, denial of researchers to touch this hot topic, denial of knowledge by VA adjudicators and social security administration?  The whole system seems to be in some kind of out of space void?

Read the article and then lets have an active comment section to this article!

REGINA—Radioactive armaments used by the US army in Iraq have been highlighted in a recent study as a probable cause for the region’s increase in birth defects, infant deaths and cancer. Unavoidably, some of the uranium that made these weapons radioactive came from Saskatchewan.

“Cancer, Infant Mortality and Birth Sex-Ratio in Fallujah, Iraq 2005-2009,” a report in the July 2010 issue of the International Journal of Environmental Research and Public Health, compared data gathered in Fallujah to data from the Middle East Cancer Registry. The infant death rate in Fallujah during the period of study (2005-2009) was found to be four times the rate in Egypt and Jordan and nine times the rate in Kuwait. Furthermore, the death rate in Fallujah has increased in recent years; and “the results for cancer show some alarming rates in the five-year period. Relative risk based on the Egypt and Jordan cancer rates are significantly higher for all malignancy, leukaemia lymphoma, brain tumours and female breast cancer.”

The early appearance of cancer in Fallujah is mentioned in the report to be similar to an Italian Ministry of Defence report noting the early appearance of lymphoma in Italian peacekeepers from Bosnia and Kosovo who were exposed to depleted uranium (DU) weapon contamination and the reported increase in cancer risks in Northern Sweden after the Chernobyl nuclear reactor disaster.

The authors of the report, though cautious in identifying the cause of the high rates of defects, deaths and cancers, concluded by drawing attention to the use of DU in armaments used by invading US forces. The report states their study does not identify the agent(s) causing the increased levels of illness, but they wish to draw attention to presence of DU as one potentially relevant agent.

The largest single source of uranium for the US military is Saskatchewan, according to a 2008 article by the Canadian Centre for Policy Alternatives (CCPA).

In fact, Saskatchewan produces more uranium than any other region or country in the world. The Athabasca Basin region of Northern Saskatchewan (with a small area of Alberta) is the world’s leading source of high grade uranium.

Uranium mining in Saskatchewan grew in the 1970s as a major government enterprise when the NDP government of Allan Blakeney proclaimed the Saskatchewan Mining Development Corporation Act (SMDC-1977). Although the title of the act suggested that mining as a government Crown Corporation would include many minerals, “The major, if not the sole, interest of the government was the exploitation of uranium resources,” according to Bill Harding in “The Two Faces of Public Ownership: From the Regina Manifesto to Uranium Mining,” a chapter in Jim Harding’s book, Social Policy and Social Justice: The NDP Government in Saskatchewan during the Blakeney Years.

Bolstered by Saskatchewan Uranium Development in the Global Context, a government report that argued uranium energy was essential to the fate of poor countries, along with government minister Jack Messner’s pledge that there would be no uranium development until each operation was assessed as completely safe to health and the environment exploitation of the resource became a focus of the Blakeney government.

Indications during the 1970s for massive growth in the number of nuclear reactors worldwide—which would providing a bonanza for uranium mining—never materialized. The price of uranium dropped from $53 per pound in 1977 to $17.50 in 1982. Under the Progressive Conservative provincial government of Grant Devine in the 1980s and early ’90s, uranium mining in Saskatchewan was privatized. The SMDC was combined with federal Crown Corporation Eldorado Nuclear Limited, and renamed Cameco.

Cameco is the world’s largest publically traded uranium company and is headquartered in the city of Saskatoon. Cameco’s McArthur River mine in Saskatchewan produces 15 per cent of the world’s uranium.

For mined uranium to be used as a fuel, it needs to undergo enrichment to separate uranium 235u from uranium 238u—the desired product: depleted uranium (DU). Depleted uranium has a useful property: it is 1.7 times more dense than lead.

Due to its high density DU is used in armour. Depleted uranium also ignites on impact if the temperature exceeds 600 degrees Celsius—a useful property if one wishes to destroy tanks, guns or buildings.

Depleted uranium is also radioactive. The United Nations World Health Organization has made several recommendations for when DU is used in military conflict, including monitoring food and water where DU might have entered the food chain, clean-up operations in impact zones where such projectiles remain in the ground, monitoring the activities of children because “their typical hand-to-mouth activity could lead to high DU ingestion from contaminated soil,” and disposal of DU in accordance with international recommendations.

Not only was the US using Saskatchewan uranium for DU munitions during its occupation of Iraq, but as late as 1990 Canada was itself processing DU which was then being sent to a US weapons manufacturer. A section of the 1970 Treaty in the Non-Proliferation of Nuclear Weapons (NPT) prohibits the sale of Canadian uranium for use in weaponry.

According to the CCPA article, “The uranium that’s going into the US for enriching becomes part of the depleted uranium stockpile, and that’s accessible for weapons.”

The CCPA article further highlights that in 1993, the Inter-Church Uranium Committee released copies of a license from the US Nuclear Regulatory Commission that followed uranium from the Key Lake mine in Saskatchewan (run by Cameco) to the US, back to the Port Hope uranium conversion plant in Ontario (run by Cameco), and finally to Aerojet in the US. Aerojet advertises itself on its webpage as a world leader in the defence and armament markets.

Cameco, like many players in the nuclear industry, has aligned itself as a partner in the health care industry. The Royal University Hospital (RUH) in Saskatoon recently named its main walkway the “Cameco Skywalk,” “named in recognition of Cameco’s $1.5 million donation in 2003 to the RUH Foundation’s Royal Care Campaign to create the Cameco Chair in Aboriginal Health,” according to the hospital’s press release. The company’s website boasts involvement in the Northumberland Hills Hospital, the St. Mary Wellness and Education Centre and the travelling Diabetes Resource Program in Northern Saskatchewan. The city’s acute care Saskatoon City Hospital houses the “Cameco MS [multiple sclerosis] Neuroscience Research Centre.” During her 2007 visit to Saskatchewan, physician,

Nobel Peace Prize nominee and renowned proponent of a nuclear-free world, Dr. Helen Caldicott chastised the Saskatchewan medical profession for partnering with what she called the “cancer industry.”

Middle East journalist Robert Fisk presents a sickening tale of depleted uranium armaments left lying around southern Iraq after the Gulf war of 1991 and the cancers occurring among the population in his book The Great War for Civilization: The Conquest of the Middle East. Fisk also identifies the problem of connecting depleted uranium to cancer: “Unlike bomb fragments with their tell-tale computerized codes, DU munitions—while easy to identify because they left a penetrator ‘head’ in or near their target—could not be physically linked to the leukaemia’s afflicting thousands of Iraqis, other than by a careful analysis of the location of these cancer ‘explosions’ and interviews with dozens of patients.”

Overlooked by most Canadian media, the medical study from Fallujah adds to mounting evidence for a global ban on the production of DU munitions, and to considering their use a war crime.

In fact, last Wednesday, Irish parliament passed the Prohibition of Depleted Uranium Weapons Bill through its fifth reading. The DU bill, which drew praise from Senators and had none speak against it, is the second private member’s bill ever to pass through Irish Senate.

Garson Hunter is an Associate Professor of Social Work at the University of Regina and the sponsor of Dr. Caldicott’s speaking tour of Saskatchewan. Sarah Pedersen is a social activist in Regina.