Home Government NEVER FORGET: How 9/11 First Responders Were Betrayed by the GOP 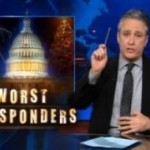 Thursday night marked the final “Daily Show” of the year — and the decade — so it’s fitting that Jon Stewart spent its entirety discussing something both near to his heart and tied an event that happened nearly 10 years ago: the 9/11 First Responders Bill.

Stewart has probably spent more segments this year on the legislation known as the Zadroga bill than any other topic. The bill would provide $7 billion in benefits for those who first responded on 9/11 and are now experiencing subsequent health problems such as cancer and respiratory disease. While it has passed in the House, Senate Republicans are filibustering it so that it doesn’t pass in the Senate.

However, Congress did just agree on and pass the controversial tax cut bill that will give tax cuts to everyone including the very rich.

“Yes!” Stewart exclaimed. “That is astoundingly good news for firefighters who make over $200,000 a year.”

Nearly pulling his hair out at one point, Stewart expressed his annoyance at “the party that turned 9/11 into a catchphrase” now blocking legislation to help its heroes. Adding to his frustration, none of the three major networks have covered the story in over two months. Surprisingly, Stewart realized this was a actually a job for Fox News, “the nation’s leading source of 9/11-based outrage.”

But how does the conservative network feel about Republicans blocking the bill? As Stewart showed, Fox news hasn’t gotten one 9/11 first responder to talk about why they need the Zadroga Bill. in fact, only one network actually picked up the story in a meaningful way: Al Jazeera.

“Our networks were scooped with a sympathetic Zadroga Bill story by the same network Osama bin Laden sends his mix-tapes to!” Stewart said with frustration. “This is insane!”

In the following segment, which you can watch below, Stewart interviewed four real 9/11 first responders and heard their response to the fillibuster. Things get emotional, but it is a must-watch for anyone who cares to hear how Congress’s actions are affecting the heroes of 9/11.

WATCH:Stewart’s segment on the Zadroga Bill