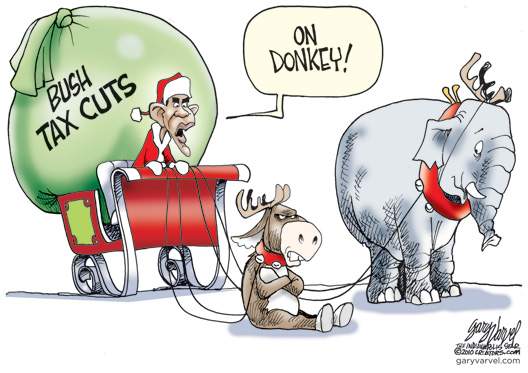 President Obama’s outrageous and blatant sellout on the Bush Tax Cuts is minor compared to his Afghan strategy of surge, bribe and fabricate the truth at the expense of the growing reality on the ground. This is a man who increasingly cannot be believed and most certainly does not deserve a second term in 2012: Allen L Roland

The imperial presidency continues and President Obama’s blatant Tax Cut sell out to the Republicans, the wealthy and Wall Street, at the expense of Main Street, progressives and a rapidly disappearing Middle Class, is indicative of his shift to the right/ center and an obvious attempt to avoid failure and ensure his re-election in 2012.

First, the so-called tax cuts ~ Former Wall Street economist Michael Hudson nails it in his recent article in Counterpunch ~ OBAMA’S SELLOUT ON TAXES
“Contrary to his pretense of saving the economy, Obama’s action will intensify debt deflation and financial depression, paving the way for a long-term tax shift off wealth onto labor. In achieving a giveaway that Democrats never would have let George Bush or other Republicans enact, Obama has laid himself open to the campaign slogan that brought down British Prime Minister Tony Blair: “You can’t believe a word he says.” He has lost support not only personally ~ but also  as the Republicans anticipate ~ for much of his party in 2012…It is a travesty for Obama to trot out the long-term unemployed (who now get a year’s extension of benefits) like widows and orphans used to be. It’s not really “all for the poor.” It’s all for the rich. And it’s not to promote stability and recovery. How stable can a global situation be where the richest nation does not tax its population, but creates new public debt to hand out to its bankers? Future tax payers will spend generations paying off their heirs.”

And second, it’s Obama’s Afghan strategy of Surge, blatant Bribes and the unending Fabrication of the truth on the ground. This is a man, similar to his predecessor and Tony Blair, who is consumed with the righteousness of his actions and will willingly fabricate the truth in order to perpetuate the myth of Afghanistan progress.  “NATO is losing the war in Afghanistan in every quantifiable way,” says Rick Rowley of Big Noise Films, who recently returned from a reporting trip to that country. And what’s more, he notes, “what’s clear from the WikiLeaks cables is that the coalition governments are not as deluded as they would like their people to be about the reality on the ground in Afghanistan.”

And the cold hard reality on the ground is that most of Afghanistan is seeing the Taliban as freedom fighters enlisted against their common enemy and illegal occupying force ~ the United States of America.
Here is a must see nine minute video of Rick discussing  the realities of what he saw on the ground in Afghanistan, along with the death of special representative for Afghanistan and Pakistan Richard Holbrooke, and much more.

The game is up for president Obama. As a former ardent supporter of the change he promised ~ I, like millions of Americans, feel not only betrayed but mislead and used to the point that I no longer believe a word he says.

Afghanistan is Obama’s Vietnam for it is my firm belief that sooner or later, and quite often in the most unexpected ways such as the Wikileak’s disclosures, the truth of this quagmire of corruption will become apparent to all. Here is a Mainstream Media ignored video of the veterans For Peace anti-war protest held outside the White House this week ~ where Chris Hedges, Daniel Ellsberg, Ray McGovern and over 500 other Veterans braved the cold and snow to protest Obama’s folly and got arrested in the process. 13 minute Video