Home Veterans Marine’s dying wish was to save his dog

Marine Lance Cpl. William H. Crouse IV had one of the most dangerous jobs in Afghanistan but he did it anyway. Searching for bombs that could blow up his friends must have seemed worth it to him and his dog but in his last thoughts here on earth, he wanted to make sure his dog was safe. 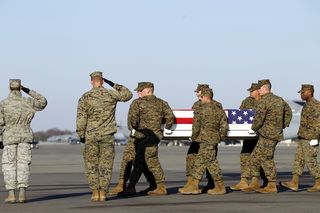 On the morning before Christmas, a Marine’s remains return from Afghanistan

December 24, 2010 | 10:54 am
On this morning before Christmas, the remains of Marine Lance Cpl. William H. Crouse IV, who was killed Tuesday in combat in Afghanistan, were returned to Dover Air Force Base in Delaware.

Crouse, 22, from Woodruff, S.C., was the 161st Marine killed in Afghanistan this year, according to the independent website www.icasualties.org.

Of those, 60 were from Camp Pendleton in Southern California. Others, like Crouse, were from other Marine bases but, in Afghanistan, were attached to the Camp Pendleton-based 1st Marine Expeditionary Force (Forward).

Crouse and his bomb-sniffing dog were killed by a roadside bomb in Helmand province. He had been in Afghanistan for six weeks as Marines continue their mission to wrest away control of what has long been a Taliban stronghold.

His mother, Nancy Siders of Fort Wayne, Ind., told the newspaper in Greenville, S.C. that her son’s dying concern was for his dog.

“My son was coherent for a brief period, and his biggest concern was ‘where is my dog? Save my dog. Put him in the Medevac with me. Save his life,'” she said.

The dog was put in the helicopter with Crouse but died. It was the Marines’ fifth bomb-sniffing dog to be killed in combat.
On the morning before Christmas, a Marine’s remains return from Afghanistan

I had to get away from this story for a little bit. As most Americans are heading home from the malls closing in the next few minutes, putting the grocery bags or heading off for a Christmas Eve service, this family is planning a funeral. They will be thinking about all the other years of Christmas Eve’s their son was there, which in Crouse’s case would have been 21 of them. They will be holding pictures of him instead of watching him open gifts.

Whatever problems we have in our own lives stop and say an extra prayer for the men and women not able to be home for Christmas and for the families they leave. Say a prayer for all the other families when their serviceman or woman has already been laid to rest.