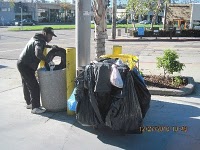 Veterans helping Veterans and the VA and LA Cops making veterans’ lives a deeper hell.Robert Rosebrock, Director, Old Veterans Guard, writes letter to General Eric K. Shinseki, Sec. of Dept of Veterans Affairs, and a LA Times columnist standing up for veterans. Marine (at left) is a homeless Veteran who was recently arrested by the Los Angeles Police for being in possession of a shopping cart that did not belong to him, and he subsequently spent 60 days in jail.

[Editor’s Note: Actually, some LAPD officers go out of their way to harass homeless Veterans … probably an extended arm of the VA bureaucrats and Rep. Henry Waxman.]

Attached is an article that I respectfully ask you to read and see the magnitude of what is happening to America’s homeless Veterans here in Los Angeles County.

Marine Veteran George Billingslea is a homeless Veteran profiled in this article. George was recently arrested for being in possession of a shopping cart that did not belong to him, and he subsequently spent 60 days in jail.

I thought our prisons were “overcrowded,” so why are we incarcerating industrious individuals like George who are simply “using” a shopping cart to load bottles and cans to take to the recycling center in order to earn a few hard-earned dollars?

Shouldn’t the environmentalists be wrapping their arms around George instead of trees and Hybrid cars?

George was also recently arrested on the West LA VA grounds. The VA police did not arrest him for having a shopping cart that belonged to someone else, but for removing bottles and cans out of a VA trash bin, which is his way of making a living.

That VA ticket cost George $150. What kind of VA do we have that would be so cruel and insensitive? Simply ordering him off the premises would have been sufficient, because George is a very cooperative and well-liked individual. In fact, the VA should pay him to clean out the bottles and cans of their trash bins.

More importantly, George should be living on the VA grounds (National Veterans Home) as a resident and not humiliated and criminalized as a “trespasser” on his own rightful land.

It’s time that somebody at the VA reads the Congressional Act of 1887 and the legal Deed of 1888.

George is simply trying to make an honest living, albeit with a borrowed shopping cart.

That is hardly a crime when considering a wealthy neighboring homeowner group essentially stole a 16-acre, $1-billion dollar parcel of land at the Veterans Home when they got it rent-free for a public park. Meanwhile, 20,000 homeless and hungry Veterans struggle to survive on the dangerous streets of LA.

The City of Los Angeles has a $1-a-year lease on 12 acres of Veterans land that includes an off-leash public dog park, yet George gets fined 150 times that for taking a few bottles and cans out of a trash bin on Veterans land.

Over the past couple of years, $200,000 was embezzled from the Veterans Golf Course and the individual(s) who stole the money weren’t even given a slap on the wrist, nor were they given any prison sentence.

Did I mention George spent two months in jail for using a shopping cart to earn a living, and was fined $150 by the VA for taking some plastic bottles and cans out of a trash bin that would probably net him less than a dollar?

Mr. Lopez, it’s time to put a “face” on the homeless Veterans of Los Angeles, and you can start with George.

Here’s George busy working at 10:49 AM in Brentwood, three blocks from his rightful Veterans Home. 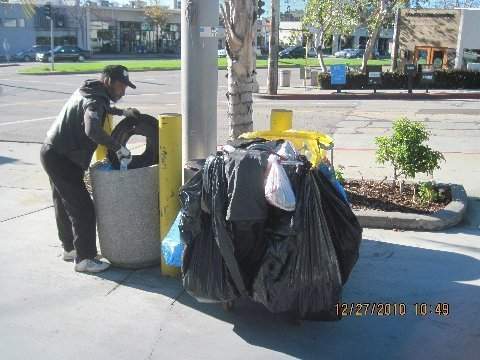 Here’s a homeless Veteran sleeping outside the chained and padlocked front gates of the Veterans Home at 10:38 AM this morning. 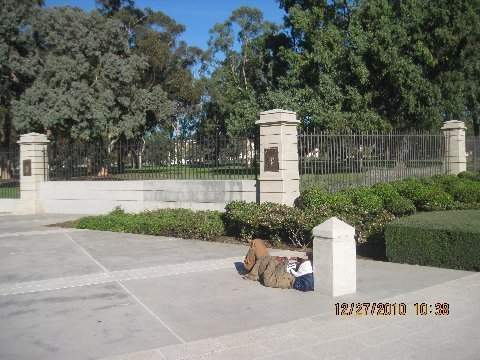 Many homeless Veterans sleep here in the daytime so they can stay awake at night and defend against unknown harm and danger at night. 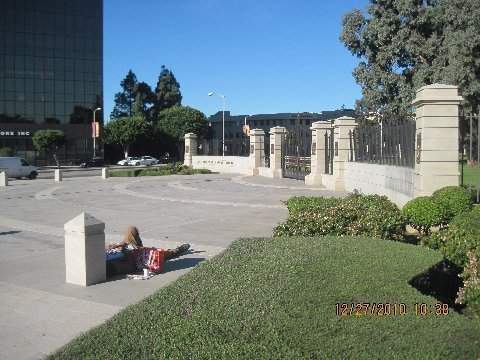 Mr. Lopez, there is one reason, and one reason only that Los Angeles County is the Nation’s capital for homeless Veterans and that is because the Congressional Act of 1877 and the Legal Deed of 1888 have been egregiously violated and breached, and the sacred land at the Los Angeles National Veterans Home has been pillaged and plundered for the benefit of special-interest, non-Veteran, non-profit corporations, all under the ruse of “honoring our veterans.”

It’s highly commendable to see Veterans like Shad Meshad and Steve Peck taking care of Veterans, instead of the current system that has non-Veterans taking advantage of Veterans. You’ve shown the good, now expose the bad and the ugly side of this problem.

Perhaps it’s time to take to the street and meet George and get a real live homeless Veteran story. Please check the attached article and note the overload of drugs that the VA pushes on him. George is a hero because he survives against all odds.

It’s also time to ask Congressman Henry Waxman why he has not investigated this illegal and immoral misappropriation of Veterans sacred land. Correspondingly, he needs to be asked why Los Angeles County has more homeless Veterans than any other County in the nation, yet this is the largest VA-Veteran Home in the nation. After all, he’s been the elected public servant entrusted to protect this national sacred trust for the past 36 years.

Hopefully, with the new change in the House of Representatives, responsible public servants will finally investigate these horrendous crimes against America’s Military Veterans.