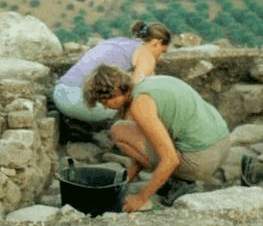 AND NOW COMES NEWS THAT ALL HUMAN LIFE BEGAN IN ISRAEL.

According to the Israelis. Whether that’s so or not, some of us fear that the way things are going, all human life might end there too.

“It’s very exciting to come to this conclusion,” said archaeologist Avi Gopher, whose team examined the teeth with X-rays and CT scans and dated them according to the layers of earth where they were found.

He stressed that further research is needed to solidify the claim. If it does, he says, “this changes the whole picture of evolution.”

The accepted scientific theory is that Homo sapiens originated in Africa and migrated out of the continent. Gopher said if the remains are definitively linked to modern human’s ancestors, it could mean that modern man in fact originated in what is now Israel.

Sir Paul Mellars, a prehistory expert at Cambridge University, said the study is reputable, and the find is “important” because remains from that critical time period are scarce, but it is premature to say the remains are human.”