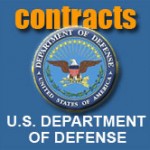 Bell Helicopter Textron, Inc., Fort Worth, Texas, is being awarded a $22,021,303 modification to a previously awarded firm-fixed-price, cost-plus-fixed-fee contract (N00019-10-C-0035) to exercise an option for logistics products and services in support of H-1 helicopter upgrade program. Services to be provided include logistics management support, technical material for maintenance planning, design interface, supply/material support, technical data, distribution and inventory management/packaging, handling, storage and transportation, logistics management information, supportability analysis, technical manuals, and logistics support/technical liaison support. Work will be performed in Fort Worth, Texas (96 percent), and Afghanistan (4 percent), and is expected to be completed in December 2011. Contract funds will not expire at the end of the current fiscal year. The Naval Air Systems Command, Patuxent River, Md., is the contracting activity.

The Boeing Co., St. Louis, Mo., is being awarded a $14,471,274 modification to a previously awarded firm-fixed-price contract (N00019-09-C-0050) for additional persistent intelligence, surveillance, reconnaissance unmanned aerial vehicle services in support of Marine Corps combat missions. Work will be performed in Bingen, Wash. (97 percent), and St. Louis, Mo. (3 percent), and is expected to be completed in February 2011. Contract funds in the amount of $14,471,274 will expire at the end of the current fiscal year. The Naval Air Systems Command, Patuxent River, Md., is the contracting activity.

Mikel, Inc., Fall River, Mass., is being awarded a $9,068,671 cost-plus-fixed-fee contract to provide engineering services to Team Submarine and the PMS 425 program offices. These services will be rendered as needed to provide for research and combat system development and processing in the areas of automation and data fusion, target motion analysis, weapon employment, and tactical decision aids that extend and apply previous efforts that focus on improved automation, reduced manning requirements, and improved human system integration over current combat systems applicable to Navy submarines. In addition, these services will include development of tactical combat and surveillance system algorithms and software to include sonar, combat control, weapons, communications, C4I and navigation functionality as well as non-tactical software for undersea fixed and portable tracking ranges. Work will be performed in Fall River, Mass. (88 percent); Manassas, Va. (9 percent); Laurel, Fla. (1 percent); North Kingstown, R.I. (1 percent); and Poulsbo, Wash. (1 percent). Work is expected to be completed by December 2015. Contract funds in the amount of $1,432,438 will expire at the end of the current fiscal year. This contract was not competitively procured. The Naval Sea Systems Command, Washington, D.C., is the contracting activity (N00024-11-C-6295).

Northrop Grumman Systems Corp., Bethpage, N.Y., is being awarded a $6,582,920 modification to a delivery order placed against a previously issued basic ordering agreement (N00421-05-G-0001) to exercise an option for engineering, technical and sustaining services in support of Taiwan Air Force E-2C aircraft under the Foreign Military Sales program. Work will be performed in Bethpage, N.Y. (75 percent), and at the Pingtung Air Force Base, Taiwan (25 percent), and is expected to be completed in December 2011. Contract funds will not expire at the end of the current fiscal year. The Naval Air Warfare Center Aircraft Division, Patuxent River, Md., is the contracting activity.

Teradyne, Inc., North Reading, Mass., was awarded an estimated $28,377,673 contract for maintaining the B-1 automatic digital test systems and application development environmental systems. At this time, $9,617,451 has been obligated. OC-ALC/GKAKB, Tinker Air Force Base, Okla., is the contracting activity (FA8102-11-C-0001).

Integrated Data Services, Inc., El Segundo, Calif., was awarded a $10,436,911 contract for the Comprehensive Cost and Requirements System, a financial program management software tool which is used by Air Force acquisition and sustainment organizations to accomplish planning and execution of program budgets. At this time, $4,354,725 has been obligated. ESC/HIBK, Wright-Patterson Air Force Base, Ohio, is the contracting activity (FA8771-C-11-0001).

General Dynamics Advanced Information System, Minneapolis, Minn., was awarded a $7,832,414 contract which will provide a research and development program which seeks to develop an open architecture for modular open systems architecture common back end for radio frequency that conforms to interface standards. At this time, $230,000 has been obligated. AFRL/PKSR, Wright-Patterson Air Force Base, Ohio, is the contracting activity (FA8650-11-C-1041).

BAE Systems National Security Solutions, Burlington, Mass., is being awarded an $8,372,580 cost plus fixed-fee contract (HR0011-11-C0023). This award is for the Behavioral Learning for Adaptive Electronic Warfare (BLADE) program, to develop counter adaptive wireless communication threats in tactical environments and in tactically relevant time scales. The BLADE program will achieve this objective by developing novel algorithms and techniques that will enable Department of Defense electronic warfare systems to automatically learn to jam new radio frequency threats in the field. Work will be performed in Burlington, Mass. (63.6 percent); Nashua, N.H. (24.6 percent); and Piscataway, N.J. (11.8 percent). The work is expected to be completed May 2012. The Defense Advanced Research Projects Agency is the contracting activity.